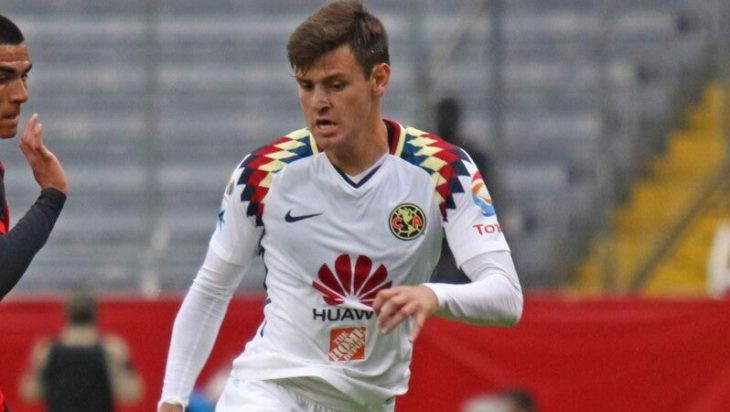 VANCOUVER ISLAND – Alejandro Díaz is ready for most things.

Such is the by-product of an early career spent with Club América, one of the biggest pro clubs in Mexico who draws an average of over 40,000 supporters per match. One gets used to the roar of the crowd, the opponent’s jeers, the pressure to perform.

What’s different from all of that? A Canadian spring with single-digit temperatures tops the list for the Pacific FC newcomer.

“I’m trying to get used to that,” the 24-year-old Mexican joked with CanPL.ca. “When I came, I was freezing all the time.”

(Here, it bears repeating that Victoria has had cherry blossoms since mid-February. Clearly, Díaz has never wintered in Winnipeg or Edmonton.)

Why now? Why brave the cold?

“I spoke with Rob, and then I spoke with coach Pa [Modou Kah],” said Díaz, a two-time Concacaf Champions League winner.

Friend sold the striker on a young squad with title ambitions.

“He told me that we’re a really young team … that we want to be a young team, but also successful. We want to win everything. I thought it was a great challenge for me,” Diaz explained.

His recent stats are somewhat sparse (he went goalless in 13 appearances for Mexican club Atlas in 2018-19). But the highlights are noteworthy: in 2018, the striker headed in an away goal against Panama’s Tauro FC to send Club América to the Concacaf Champions League semifinals (they would go on to lose the next round to Toronto FC); and he represented Mexico at the U-20 Concacaf Championship in 2015, scoring four goals in five appearances.

“That was something we were waiting to see,” Pacific’s associate head coach James Merriman told CanPL.ca. “It’s a big CV, so we were curious once he got into the training environment, and he’s been excellent … excellent movement, good technique, a pretty cool, calm, collected finisher.”

Pacific coach Pa-Modou Kah added: “You could see his quality shine. Just the little things that he does that make you understand [he’s] played at a high level.”

The love for soccer came early for Díaz. It was Díaz’s cousin, Mauro, who introduced him to the sport. Growing up in the tree-lined suburb of Satélite, a five-year-old Díaz began playing soccer at his school, Centro Escolar del Tepeyac.

Early on, the youngster grew fond of Javier ‘Chicharito’ Hernández – a striker whose number (9) Díaz now wears for Pacific. Later, at Club América’s academy, Díaz trained alongside Raúl Jiménez – another Mexican footballer who, like Chicharito, found success in the English Premier League with Wolverhampton Wanderers.

“It was great for my experience to play [at América], because you play with a lot of talented players,” Díaz said.

It’s the type of experience he hopes to bring to his new club.

Though Díaz has played on the wing before, he prefers to be a striker. How he’ll fit with fellow striker Terran Campbell, one of Pacific’s brightest spots from 2019, remains to be seen. Will Kah start them both up top, or use a platoon system? For now, Díaz is full of praise for his new teammate.

“I think [Campbell’s] an amazing player,” Díaz stated. “Really strong … he’s got a good left [foot]. I think he’s going to do great.”

It has been awhile since Díaz has seen regular minutes. With Zacatepec in Mexico’s second division, he managed just seven appearances in 2019. Pacific’s front office is betting that with more minutes, Díaz will find his form – and perhaps his goal-scoring touch. The on-field result will show in just a matter of time.

For Pacific to reach its ceiling, it’s a gamble the club is ready to make. Will Díaz’s form resemble his recent numbers, or the promise of his early career highs?

Kah and Merriman, for one, are betting on the latter.

“Having somebody like him, he’s very humble [and] hard-working,” Kah said.

“He’s shown great character,” Merriman added. “[He has] big potential to have a really good season.”