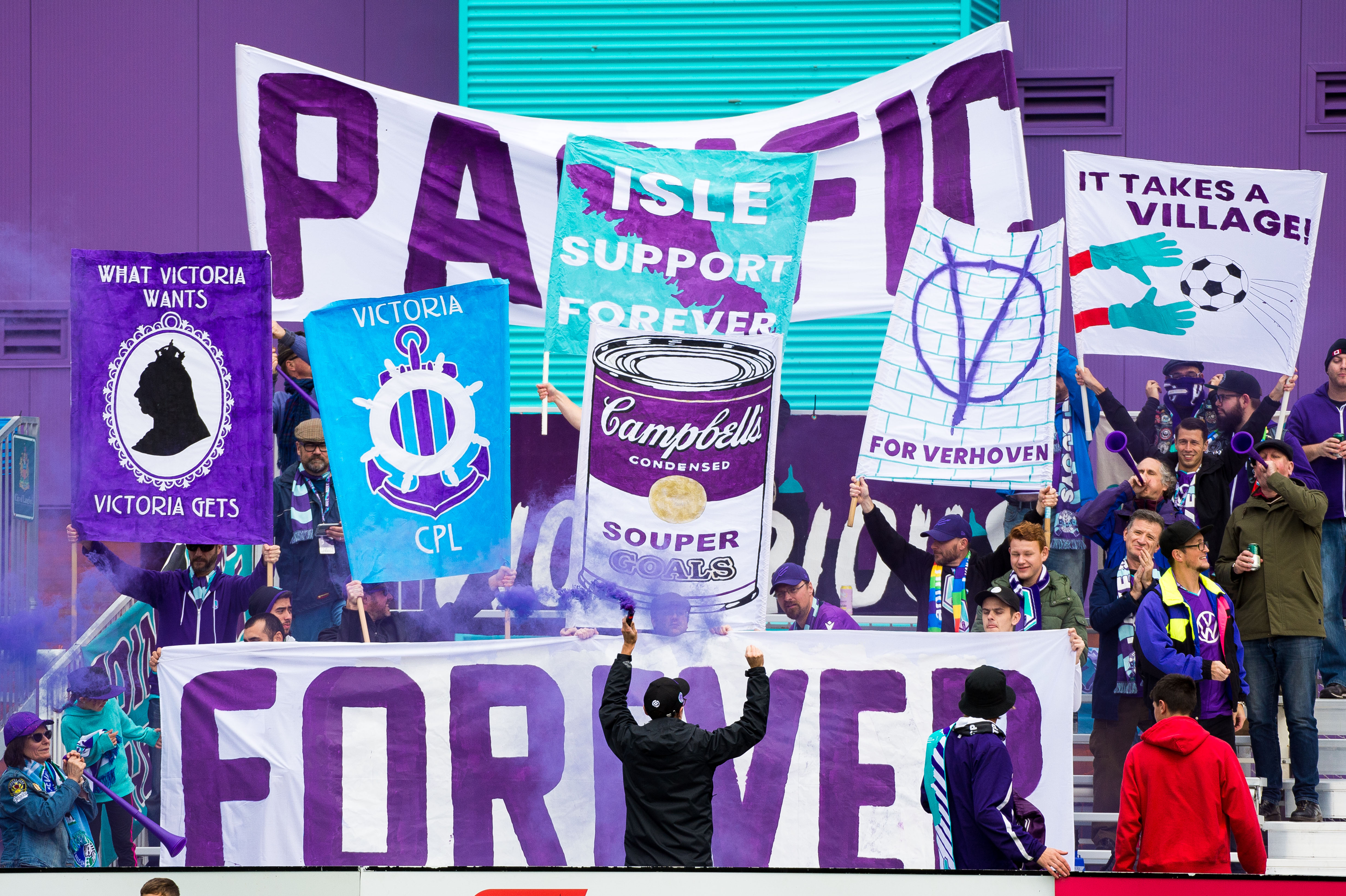 Even though the Canadian Premier League is on hiatus, the Lake Side Buoys still have very big plans for the 2020 season, whenever it kicks off.

COVID-19 delays and protocols haven’t stopped members of the Pacific FC supporters group from getting together when they can, planning to outdo their first season of supporting their hometown club in the CPL.

What’s foremost on the agenda for Lake Side Buoys president Jason Armond? A tifo display with pyrotechnics – upgrading their impressive collection of Year 1 tifos at Westhills Stadium with fire.

“We have some really big ideas,” Armond told CanPL.ca. “One of these banners could be bigger, especially if we get a pulley system set up, and it would have pyrotechnics on it.

“I’m not sure if we’ll be able to do that this year but we are planning on outdoing ourselves, that’s for sure.”

Ideation has helped to keep the Lake Side Buoys and other CPL supporters groups together during the COVID-19 crisis – coming up with ideas for tifos and cants, and new ways to keep members occupied. Pacific’s latest virtual pub night, which featured PFC players and coach Pa-Modou Kah, lasted well over four hours, much to the delight of Lake Side Buoys members.

When Kah appeared, suddenly supporters’ beer disappeared from the camera, though.

“He’s a very serious guy. No drinking when he’s around,” Armond said.

“Someone showed the video of him on the hoverboard [when the Vancouver Whitecaps won the Canadian Championship in 2015], and everyone would laugh.”

Pub nights, online chatter, it’s all about keeping people occupied – something Armond and his group have identified as a key problem during these stressful times. The group has grown exponentially year-over-year after supporting the Victoria Highlanders for several seasons before Pacific FC came along, so keeping new members involved when there are no matches taking place can be difficult.

PFC fans have been particularly hard-done-by with the COVID-19 delays, too. Westhills Stadium was set to host the Canadian men’s team in March for a pair of friendlies against Trinidad and Tobago, which would have brought Bayern Munich standout and former Vancouver Whitecap Alphonso Davies to Vancouver Island.

“You have to keep that hype train going, otherwise people will lose interest,” Armond said. “Our main way of recruiting is at games, too, so growth has stagnated.”

To make up for it, Armond personally delivered supporters group scarves during the “height of lockdown,” something he was happy to do.

“Everyone who renewed (their) membership will get a scarf, instead of impersonally mailing them, I delivered all the packages personally – drop the package, stand way back, and have a chat with them. I think it brightened up a lot of people’s days because I might have been the only person they had seen that week,” Armond explained.

It’s about keeping spirits high… as high as the pyrotechnics will fly at Westhills Stadium one day.

“Our supporters’ group is still meeting virtually at the same rate. To plan tifos, social media campaigns, that sort of thing,” Armond offered.

“Staying connected with social media has been our biggest lifeline.”