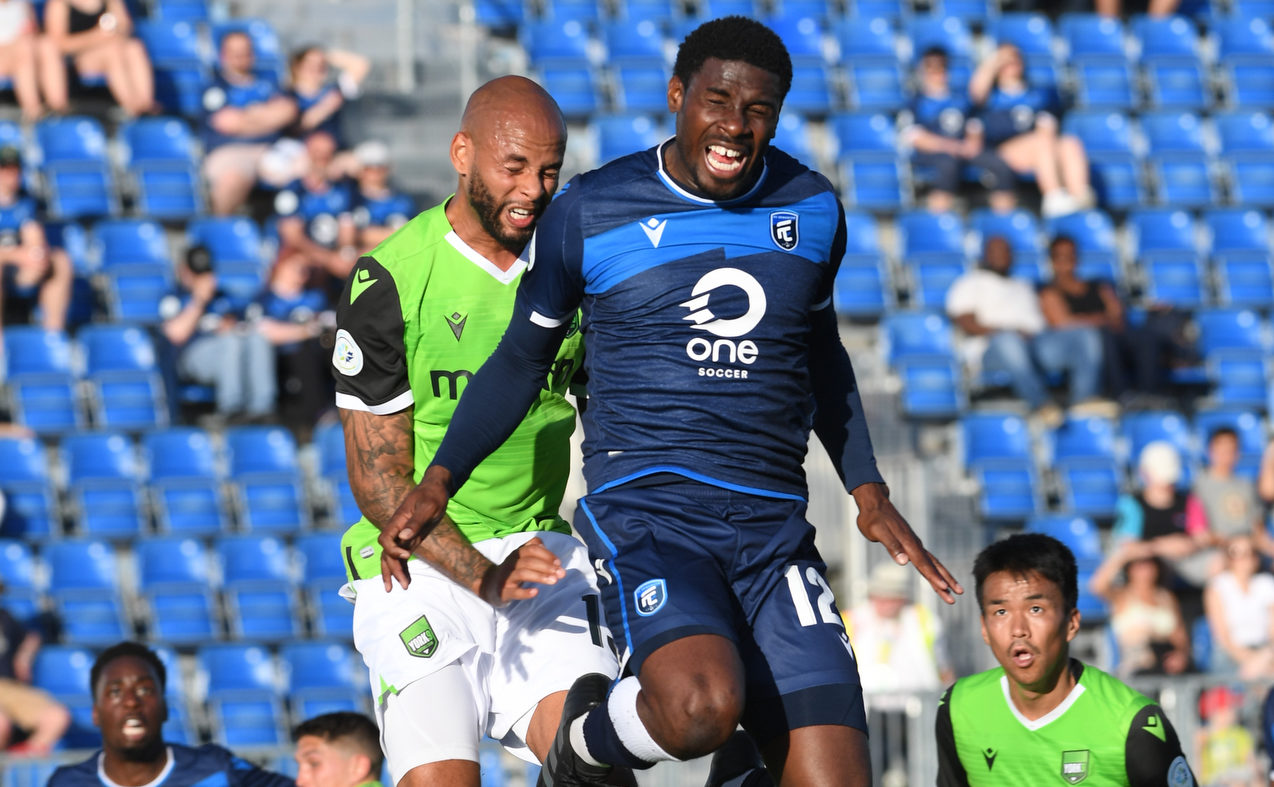 Edmonton FC vs York
Paulus left fuming after FCE’s CanChamp knockout: ‘Do I get an apology this time?’
2019-06-13
by
Steven Sandor, CanPL.ca contributor
News

EDMONTON – On first glance, it was a consolation goal.

In the 93rd minute of the second leg of the second qualifying round Canadian Championship tie between FC Edmonton and York9 FC, Mele Temguia got his foot to the ball in the box and steered it past keeper Nathan Ingham.

But, all it did was give Edmonton one goal, when the Eddies needed two.

The home side “won” the second leg 1-0, but still needed to overturn a 3-1 deficit from leg one.

So York9 advance to face the Montreal Impact.

But, after answering some questions about the number of chances his team created, what the Eddies’ attitude was like going into the game, how the team will grow going forward, FCE coach Jeff Paulus made a request of the media as the post-game press conference ended.

“Ask me about the ref,” he said. His voice was cold.

So, we asked. And Paulus went back in time a week to Leg 1 – late in that game, the referee ruled out what looked like FCE’s second road goal. The ball went off Tomi Ameobi’s chest and into the net, but the officials ruled that Ameobi had impeded York9 ‘keeper Nathan Ingham.

What Paulus knew was that if the first leg ended 3-2 rather than 3-1, Temguia’s goal would be a series winner — and not a simple consolation. In fact, Temguia’s late goal made the series loss harder to stomach for Paulus. If they don’t score in the second leg, that call doesn’t matter. But, as soon as the ball went in, that decision was put into focus.

“That decision not to award the second goal has put us out of the Canadian Championship,” Paulus carefully explained.

“So, now, just like I got an apology five years ago, whatever it was, when the referee made a bad decision in the Montreal Impact game, do I get an apology this time?”

Paulus knew he was pushing it. And, to make sure the message to the media was clear — he said “I’ll pay the fine.”

Paulus evoked the most tragic on-field moment in the franchise’s history; in 2014, the Eddies were seconds away from shocking the Montreal Impact and booking a spot in the Canadian Championship final. But the referee gave the Impact a 97th-minute penalty, ruling defender Mallan Roberts handled the ball in the penalty area. The call was controversial, and Paulus said Fischer apologized to the Eddies a year later.

Paulus said he hopes he doesn’t want to wait a year for the referee to say sorry to the Eddies.

And, Paulus then made sure to defend his group of players. He said that, even with the score at 0-0 at halftime, the Eddies felt like they were going to go out and get a pair in the second half. Though it took till the 74th minute for the team to get a second shot on target, Paulus said he felt York9’s defenders did a good job blocking shots, and that balls were just falling out of reach of his team’s players.

The Eddies are out of the Cup and have won but one game this season, but Paulus said it’s too early to judge his group.

“This group of players, they’re human, they read social media, they see some of the stuff that’s said about them as players, or us as staff,” Paulus said. “I don’t mind the stuff they say about staff, it’s what we’re paid for. But, live a minute in our shoes, come every day and train the way they do, give everything that they do … for us, this is the beginning.”

Temguia added: “We didn’t have many shots on target, but I thought we had opportunities. Before the goal, York9 did a great job stopping those shots and defending as hard as they could. But I think we were on top in the last 15 minutes, maybe the second half, maybe the first half too.”

But in the end, the scoreline is the scoreline, the result stands, and Edmonton, like Valour, Forge, and Pacific, must now exit the 2019 Canadian Championship, and look ahead to the Battle of the North come 2020.