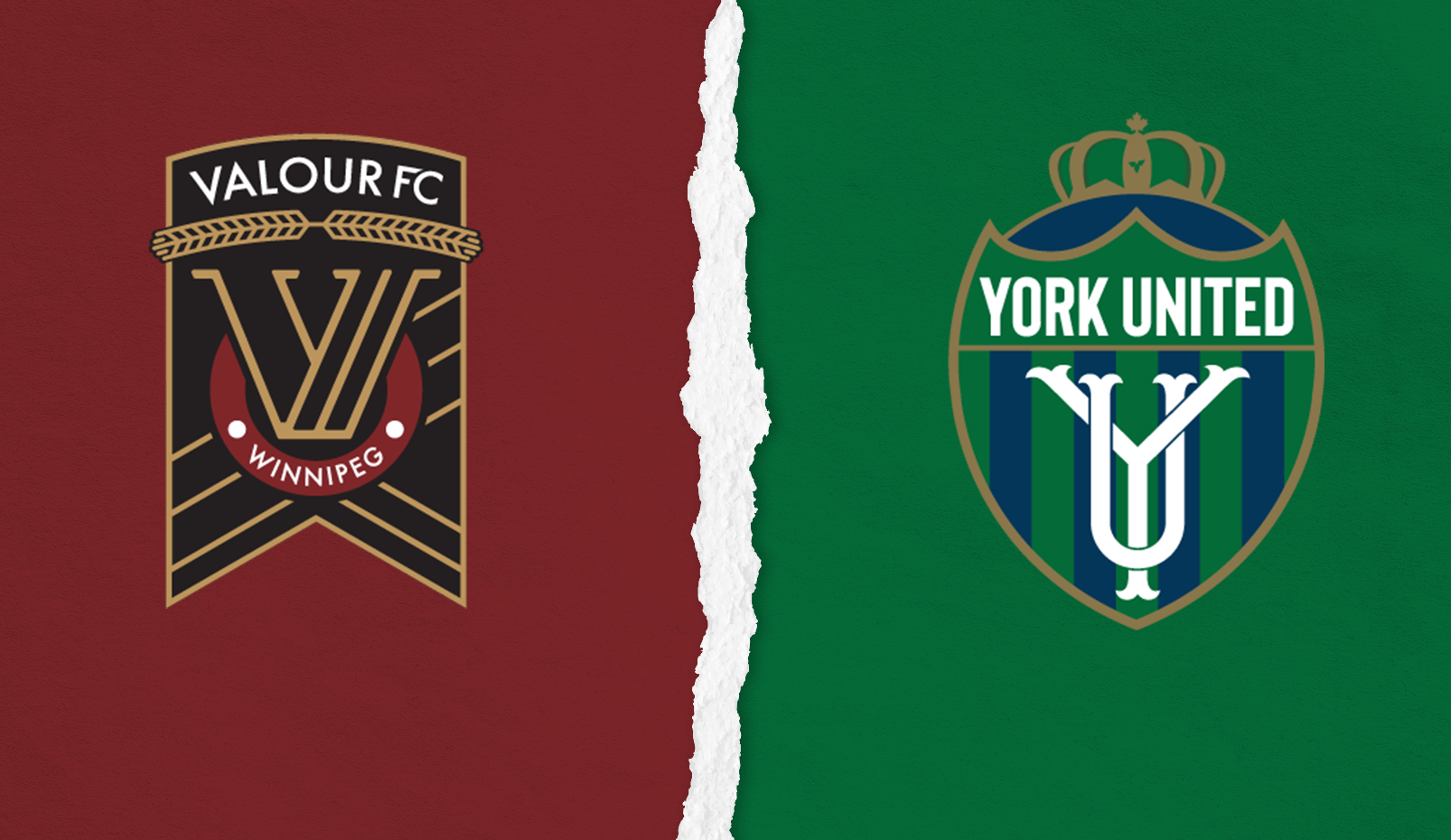 Can the third time be the charm for York United versus Valour FC?

They’re certainly hoping so, as after watching Valour win their first two games of the season series, York will be eager to get a one-up on the Winnipeg-based side, as both sides get set to do battle at Winnipeg’s IG Field on Sunday in the CPL’s ComeOn! Match of the Week.

Especially after Valour were able to grab 87th-minute and 72nd-minute winners in those previous two matchups, breaking York’s hearts with some late goals, the impetus will be there for York to avoid similar heartbreak this time around.

At the same time, Valour will be eager to repeat the feat on Sunday, as not only will they want to maintain their dominance over York this season, but are looking to keep pace in the playoff race, sitting just six points back of the playoff line as of writing thanks to a massive 2-0 win over Cavalry FC in midweek.

Having gone on a bit of a summer run that has seen them nab four wins and one draw in their last seven games, with two of those wins coming against top four teams in Cavalry and Forge FC, Valour have really found their legs as a team as of late.

Led by some strong defence, as they’ve now climbed to third-best in goals against, balanced out by some strong offence, which has seen them rise to fourth-best in goals for, they’re getting the job done at both ends right now, and that has them right back in the thick of the playoff race.

“I think that the team is confident right now,” Valour head coach, Phil Dos Santos, said. “We’re fully aware of the challenge that’s ahead of us this weekend, and we’ve prepared the team for that.”

Meanwhile, on York’s side, they’re currently in do-or-die mode, as their playoff hopes currently sit on life support after a tough summer slump. Sitting 12 points off the playoff line, it’d take a minor miracle for them to climb back into the picture, especially given that they’ve scored a league-low 14 goals this season.

At the same time, they’re not going to go out quietly, something that they showed this past week, when they picked up a crucial 4-2 win over the Halifax Wanderers, the first time all season they were able to score three in a game.

Therefore, while it might be easy for them to look ahead to next year and start focusing on what that could bring them, they want to at least try and make things interesting this year, as they chase their third win in their last four matches (which would be more than they had in their previous 15 encounters).

Having recently shifted to a new-look-back three-formation, one that has seemed to give the team some offensive life, things are looking up for York, and they’ll want to keep those good vibes rolling into this matchup.

“Yeah, it’s been a work in progress in some ways,” York’s manager, Martin Nash, said of his team’s growth and formation change. “But I think it seems to suit the players we have, as we’re just trying to find a way that we can be more effective offensively, which I think we are.”

“Now, we need to get a little bit better defensively as a unit, but I think it’s been good, I like the way it’s shaping up, I think it’s causing a lot of problems for teams, so I’m happy with the way it looks and it’s something that we’ve just got to keep getting better with.”

Plus, while Valour has the edge in this rivalry so far this year, typically the games have been close between these two teams in the past, too, and given how they had to leave things late in both of those previous encounters, it shows that this game should be relatively even and hard-fought.

Given what’s at stake for both teams, that should make for an exciting clash, one that can either continue Valour’s unlikely summer playoff push, or keep York’s faint hopes alive. Either way, those aren’t bad outcomes to have at stake, making it one to watch, much like the previous two clashes.

“Yeah, I mean, I think that’s just it, we’re asking the players to have that same commitment and performance week-in and week-out now. We had that blip with that Ottawa performance in between the two Cavalry and Wanderers wins, where the performance wasn’t terrible, but we just gave away two silly penalties, but we’ve been focusing on who we are and how we want to play the game, it’s all about us right now, not so much the opponent.” — York United head coach Martin Nash.

“It’s important (to be where we are in the standings). Frustrating at the same time, too, because we feel that we’ve we could have been closer (to the playoffs) by this time but this is where we are now, so we need to look ahead, and the good thing is that we’re in a position to look at the teams that are ahead of us, as they will play each other and try to kind of neutralize each other in the next few weeks, while our next three games are against teams that are below us in the standings. So we have a chance here that every point that we gain now could be points in our favour. And that will allow us to catch teams that are in front of us in the standings” — Valour head coach Phil Dos Santos.