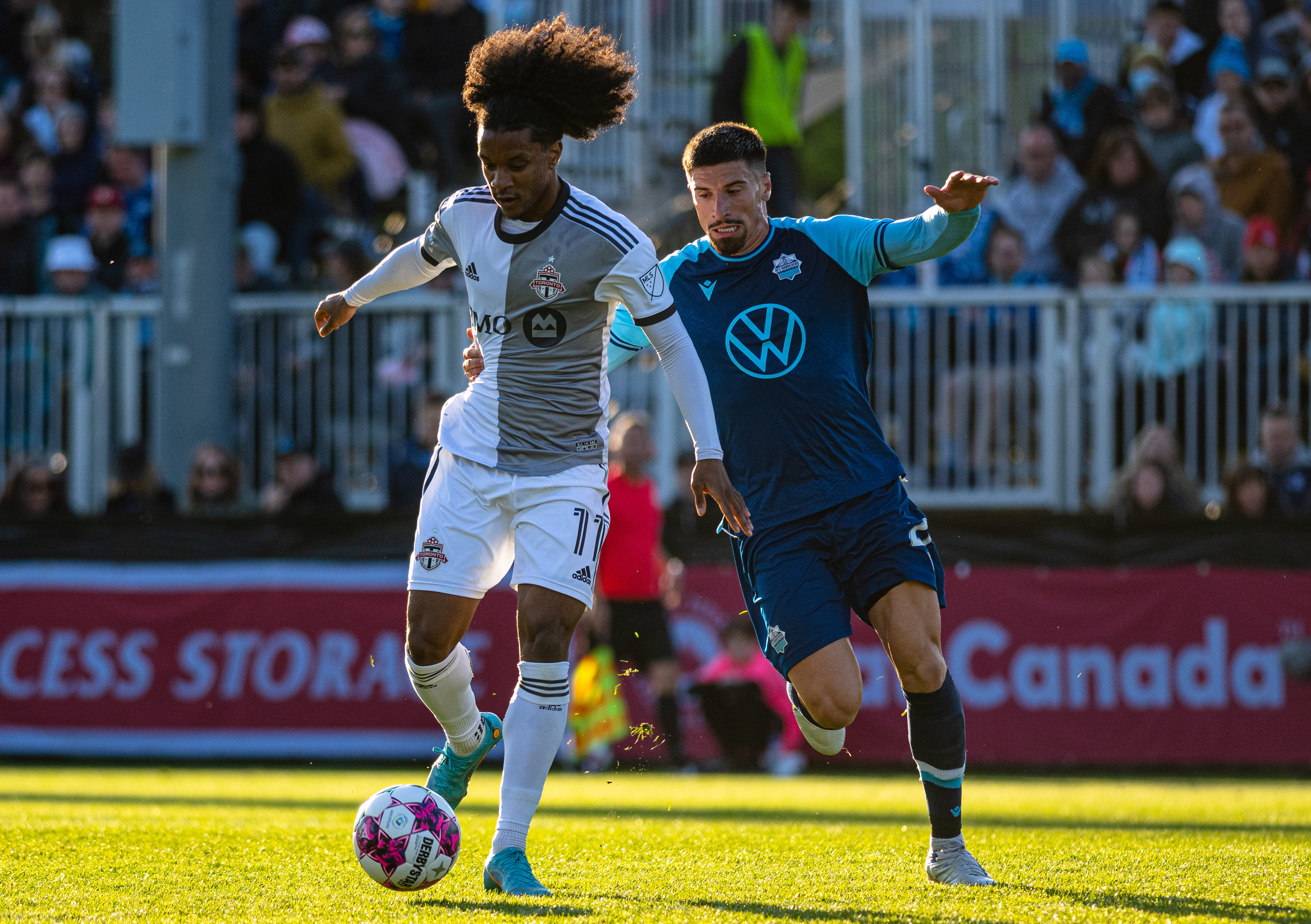 Toronto FC are through to the semifinals of the Canadian Championship, having been tested thoroughly by CPL side HFX Wanderers FC on Tuesday night. The Major League soccer club needed the full length of the match to secure their victory, as they ultimately claimed a 2-1 win in front of a jam-packed Wanderers Grounds in Halifax.

Both sides entered the match with significantly changed lineups to their weekend offerings; the Wanderers brought Colin Gander into the contest at left-back, as Jérémy Gagnon-Laparé slotted into midfield and Mour Samb joined the XI on the wing. Toronto deployed a lineup replete with young Canadians, as Jordan Perruzza slotted into the squad alongside fellow compatriots Jayden Nelson, Deandre Kerr, Kosi Thompson, Luca Petrasso, Ralph Priso, and Lukas MacNaughton.

From the opening kickoff, the host Wanderers appeared intent on going toe-to-toe with the visiting Reds. TFC controlled the ball slightly more in the very early stages, trying to get the ball upfield via a flat front four that drifted very high. Soon, though, the Wanderers’ confidence seemed to grow — perhaps buoyed on by the electric atmosphere at Wanderers Grounds — and they managed to stake more of a claim in possession.

By the end of the opening 45, Halifax had arguably enjoyed the better of the chances, outshooting Toronto five to one in the first half. Both teams had a handful of set-piece opportunities around the box, as well as more open attempts when attackers did manage to break through the congested midfield, but the half would ultimately end 0-0 as neither defence would blink.

Clearly not happy with his side’s first half performance, TFC coach Bob Bradley made a triple substitution coming out of the break — Jonathan Osorio, Ayo Akinola, and Jesús Jimenez all came off the bench in a bid by the visitors to take greater control of proceedings.

The move did pay off for the Reds, as they created chances more consistently in the first 10 minutes of the second half and, finally, they were rewarded by a set-piece. Luca Petrasso sent an in-swinging corner kick into the box, finding the head of Jordan Perruzza — who flicked it in off captain Michael Bradley’s head — to make it 1-0 for Toronto in the 55th minute.

Despite going down a goal, though, the Wanderers maintained their level of intensity and began trying to attack down the right flank via Zach Fernandez and Samuel Salter. They developed a few good chances to cross into the box, although TFC’s defence managed to turn away most of the opportunities inside the box. So, HFX boss Stephen Hart decided to shake things up somewhat.

Captain Andre Rampersad, having taken a few hard tackles throughout the match, was unable to continue by around the 65-minute mark, so Hart opted to deploy Akeem Garcia as his striker and drop Aidan Daniels into midfield.

Literally seconds after making the substitution, the Wanderers found the moment of magic they needed. Jérémy Gagnon-Laparé, finding space at the top of the box, sent it out wide for Salter, who cut inwards on his left foot and unleashed a well-placed curling strike that dipped around Michael Bradley and past the outstretched arm of goalkeeper Quentin Westberg to equalize with 20 minutes to play.

Although the hosts had a flurry of chances in the next 15 minutes — including one Salter put only inches over the crossbar — it would be TFC who found the late goal. Halifax native Jacob Shaffelburg came blistering down the left flank and he put a cross into the middle, where the ball took a wild number of deflections but ultimately it found its way into the net thanks to a clever late run from Osorio.

The upset wasn’t on the cards for the Wanderers, as Toronto held onto the slim lead and saw out the win, but Halifax nonetheless leave the tournament with plenty to be proud of. TFC, meanwhile, will now look ahead to the semifinal, where they’ll either take on either Forge FC or MLS rivals CF Montréal.