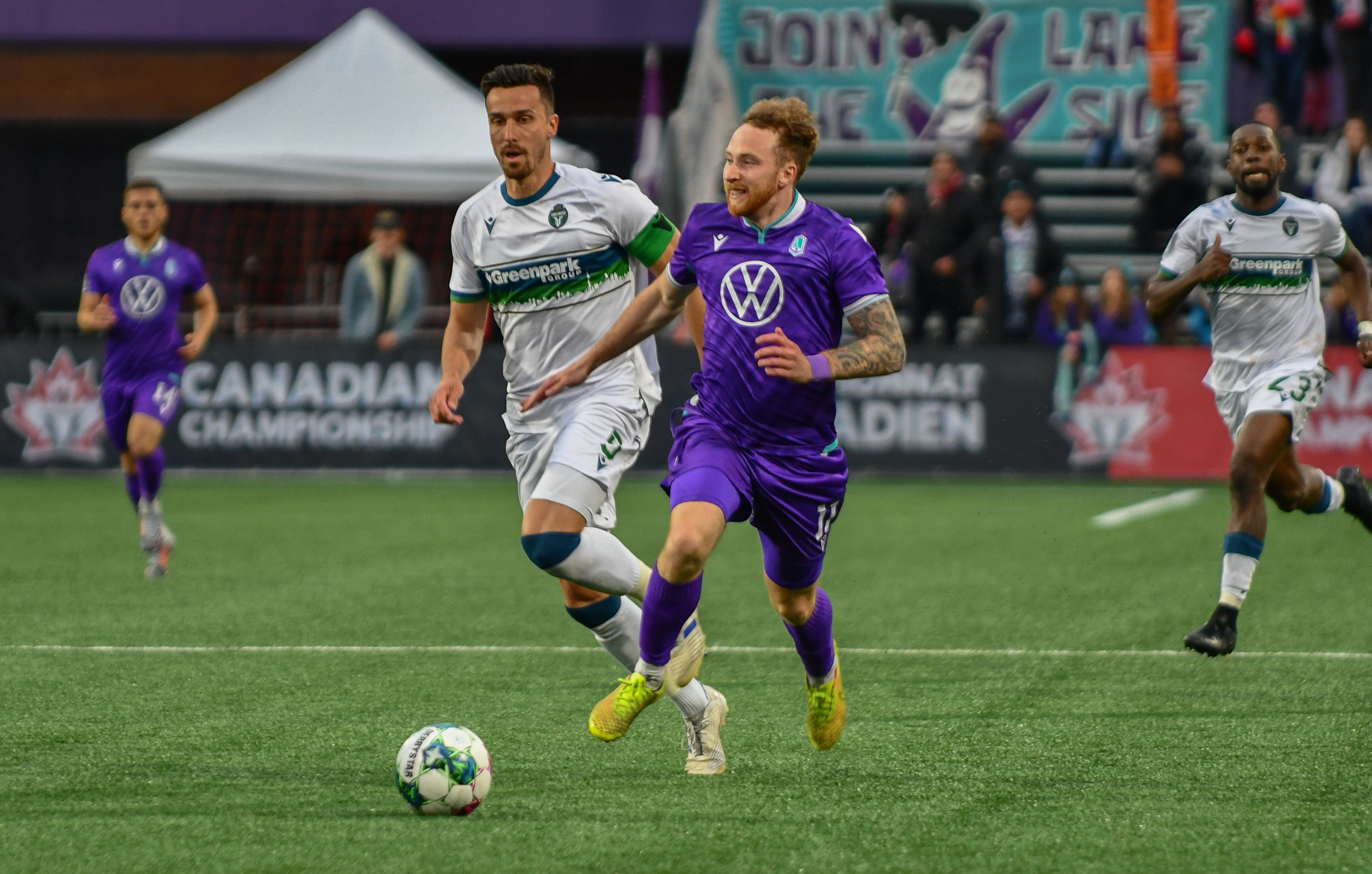 After winning via that avenue in the preliminary round, York United continued to be penalty kings in this year’s Canadian Championship, downing Pacific FC 4-3 on spot-kicks in the quarter-finals after a thrilling 2-2 draw in regular time, sending them to their first-ever semi-final in this competition.

Pacific almost got off to a dream start in the 3rd minute, as Alejandro Diaz managed to find himself all alone behind the York defence after a great Josh Heard through ball, but York’s Chrisnovic N’Sa would do well to get back and disrupt Diaz’s shot, denying the CPL’s leading scorer of a key cup tally.

A few minutes later, Heard had a good look of his own, as he settled down a bouncing ball for a volley, but his shot sailed well wide of the goal.

Building off that hot start, that’d allow Pacific to nab the game’s opening tally in the 11th minute. Off of a corner, Luca Ricci, who was making his first Pacific start in this one, whipped in a peach of a ball, one that’d find the head of Amer Đidić, who nodded home from the edge of the six-yard box with ease for the game’s first goal.

Despite the early goal, Pacific wouldn’t be done there, either. As a result of that, they’d come close in the 21st minute, after Kunle Dada-Luke did well to find Marco Bustos alone in the box, but his right-footed shot curled just over the goal from close range.

At the other end, York then finally found their first chance of the game in the 24th minute.

After a great ball into the box from Noah Verhoeven, Lowell Wright managed to pluck it down, before taking a shot, one that was just deflected wide by a defender for a corner.

Which, for York, proved to be a key moment. On the ensuing corner, Diyaeddine Abzi whipped in a dangerous ball, one that fizzled right into the back post, where he’d find an unmarked Roger Thomspon, who nodded home the header with ease for the equalizer.

They wouldn’t be done there, either.

Just minutes later, Wright managed to get the ball in a good spot, and from there, he’d do well to look up and whip in a great ball, one that found a streaking Osaze De Rosario at the penalty spot. And there, York’s leading scorer wouldn’t make a mistake with his header, nodding the ball into the back post to give his team the lead.

Continuing that burst of inspiration, York nearly made it three in the 31st minute, as Sebastian Gutierrez cut inside to unleash a dangerous strike, one that came inches from going in, just nicking off the post handout for a goal kick.

Having relinquished the lead in such quick fashion, Pacific then looked to quickly grab it back just as fast, as they turned up the intensity to try and grab a goal. And they’d nearly do that in the 39th minute, as Bustos did well to cut inside on his preferred left foot for a dangerous strike, one that would sail mere millimetres over the crossbar. A minute later, Bustos then came close again, as he sent in what seemed to be a dangerous cross, but it’d almost end up being a great goal, eluding everyone but sailing just an inch wide of the post.

On the other side of half time, Bustos would continue to cause problems for York, and he’d nearly make them pay as a result of that in the 54th minute, as he snaked into a good position in his box, where he did well to force a tough save out of York’s Niko Giantsopoulos from a tight angle. Then, a minute later, Gianni Dos Santos nearly scored an early goal of the tournament contender, ripping a rocket of a shot from a deep free kick, but his attempt would only be denied by an arguable save of the tournament candidate from Giantsopoulos.

But after a quiet lull in the game, that’d lead to a magical moment right in the 96th minute of 96 of regular time. After pushing all half without much success, Pacific would finally find their equalizer with hardly any time remaining.

After a loose ball into the box, it’d fall right to Đidić, and from there, the big centre back, who typically scores with his head, ripped a rocket of a left-footed volley, one that’d sail into the corner of the goal to send this game to penalties.

Yet, that late push would prove to be in vain, as in the shootout, York came up big. After both teams scored three of their first four penalties, it came down to the final round, and from there, it’d be all York, as Jordan Wilson converted his spot kick for his side, before Giantsopoulos came up with a big save on Bustos to confirm the win.