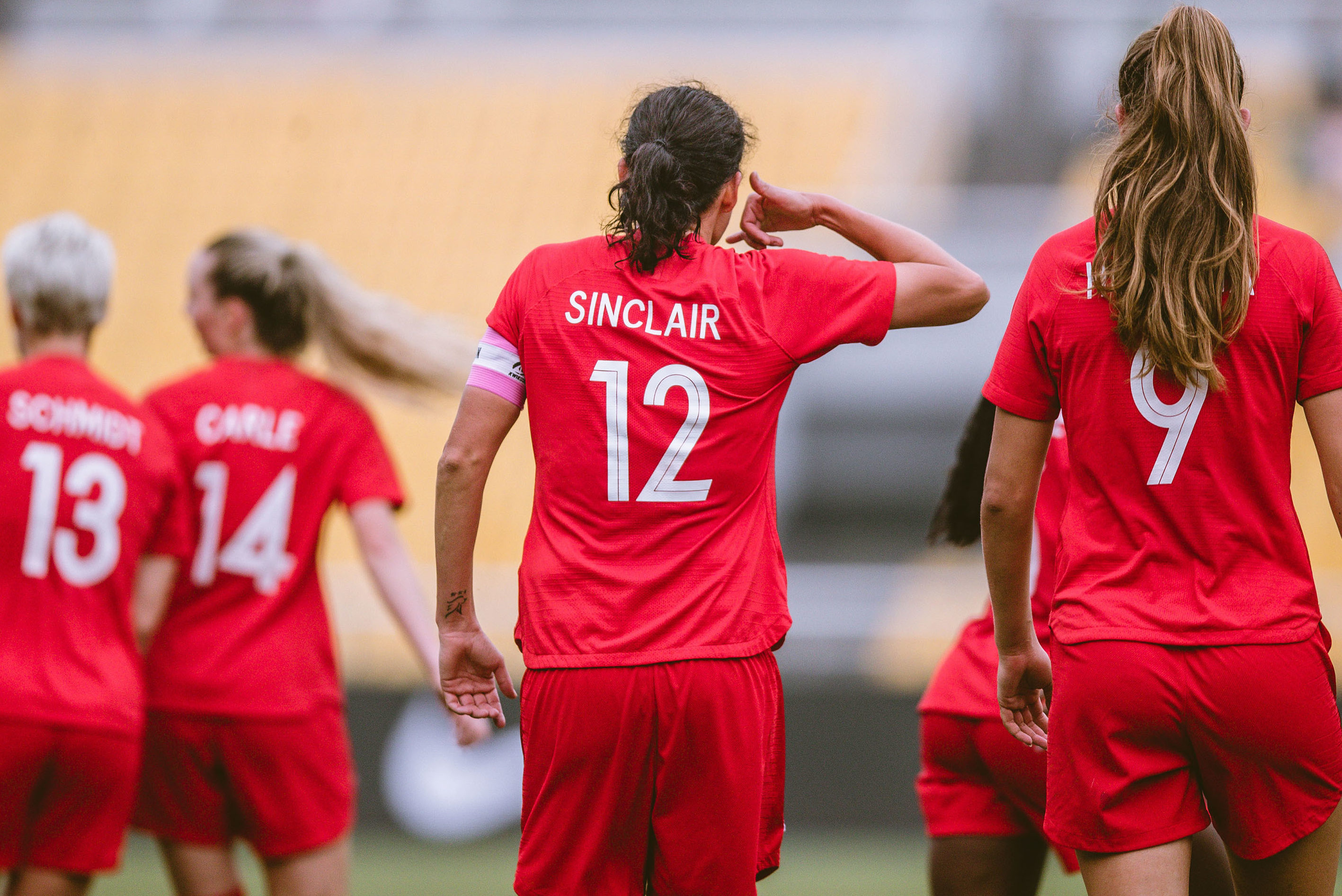 Christine Sinclair celebrates a goal at the 2019 Yongchuan International Tournament (Photo: Canada Soccer by Fang Fan)
RHODES: As Christine Sinclair reaches 300 caps, she is as important to CanWNT as ever
2021-07-21
by
Benedict Rhodes, CanPL.ca Contributor (@BTFR17)
News

We are incredibly lucky to be able to watch Christine Sinclair not only pull on the maple leaf, but show up in big moments time and time again.

Sinclair added to her legendary status on Wednesday, playing her 300th match for Canada in their 1-1 draw with Japan at the Tokyo 2020 Olympics, scoring her record-extending 187th international goal in the process.

The latest of just four people to reach that milestone, Sinclair joined a very exclusive list with a trio of Americans: Carli Lloyd (306 and counting), Christie Pearce (311) and Kristine Lilly (354) as the only players to reach 300 for their country. It is the latest remarkable stat in a career full of them.

Her sixth-minute goal on Wednesday against Japan was well-taken, and she was busy throughout the match. Canada were unable to find a second goal, and did concede a late equalizer, but there was a lot to like about the way they played. As Sinclair herself suggested after the match, it was a performance to build on.

“It was great to get ahead early, and I thought we played well to start the game. It’s a shame we couldn’t hold on to the three points, but we’ll take the point and move on,” she said. “I thought defensively we did well, they didn’t create many chances at all beside the goal and the PK.

“We knew they’d possess the ball through large chunks of the game and we’d hit them on the counter-attack, which we did. We have to recover well. The truth is we’ve been on the podium after losing our first game so anything can happen.”

The 14-time Canadian Player of the Year (including 11 in a row from 2004-2014), and the Canadian Player of the Decade for the 2010s, Sinclair is as important to the national team as she’s ever been — both as a leader and as a prolific goalscorer. The longtime captain of the team, she has now scored at four Olympics and five World Cups, a coach’s dream when it comes to consistency and longevity.

Sinclair has also won the Lou Marsh award (awarded to Canada’s best athlete by a panel of voters) after leading Canada to Olympic bronze in 2012, and has won the Bobbie Rosenfeld Award (Canada’s top female athlete) twice — in 2012 and 2020.

Simply put, she’s the greatest soccer player to have ever worn a Canadian kit, and will keep that crown for quite some time. The one thing she’s missing in her illustrious career is a major international honour. She was part of the team that won the gold medal at the 2011 Pan-American Games, as well as being a two-time Olympic bronze medalist, but a gold medal at a major tournament would be the cherry on top.

Canada have spoken a lot leading up to these Olympics about wanting to “change the colour of the medal”, and this may be her last chance to do so. She’ll be 41 when the 2024 Olympics in Paris take place, and while not impossible as she’s shown little to no signs of slowing down, it remains to be seen what the next few years have in store for her and the Canadian women’s national team. There will also be a World Cup in 2023, but the same logic applies.

The ambition for Tokyo 2020 is very much to win gold, and if they’re going to challenge for that, Sinclair will need to continue to be at her best. Bev Priestman played her in a slightly different role on Wednesday — as a false nine, sitting a bit deeper and using her vision to try and create chances to score. Canada only had one shot on target in the end, but Sinclair made it count, and now sits two goals back of another record.

With her 12th Olympic goal, Sinclair is now two back of Brazilian legend Cristiane’s record of 14 goals at Olympic Games, a number that is certainly within reach — especially if she continues to be the focal point of Canada’s attack. She’s also now just 13 goals back of 200 in her international career, another milestone which would put her in the conversation for the greatest international footballer of all time. She just needs that major international honour.

There is a (fair) conversation going on about the Canadian women’s national team and where goals are going to come from in this tournament, and whether Canada rely too much on their captain to be that lethal finisher that wins them games. The answer to the second question might be yes, and that can be a worrying prospect, but Canada have the ability to turn that around quickly with the quality they have in the squad.

The issue on Wednesday was a hesitancy to shoot the ball when they get into good areas, and had Priestman brought ruthless finishers Adriana Leon and Évelyne Viens off the bench earlier than she did — while Canada still had the lead — the result could’ve been very different. The pair didn’t stop running for the time they were on the pitch (about 13 minutes), and got themselves into dangerous areas, suggesting that they can be difference-makers off the bench, or possibly challenge for starting minutes — Leon especially as a wide player.

It was a performance Canada can build on. They move on now to play against Chile on Saturday (3:30 am EST/ 4:30 pm JST), with getting important points on the board the priority. The top two teams from each of the three groups qualify for the next round, as do the two best third place teams.

Looking to take another step in the right direction against Chile, and with a tough test against Great Britain a few days later, expect Sinclair to play a major part in both matches.