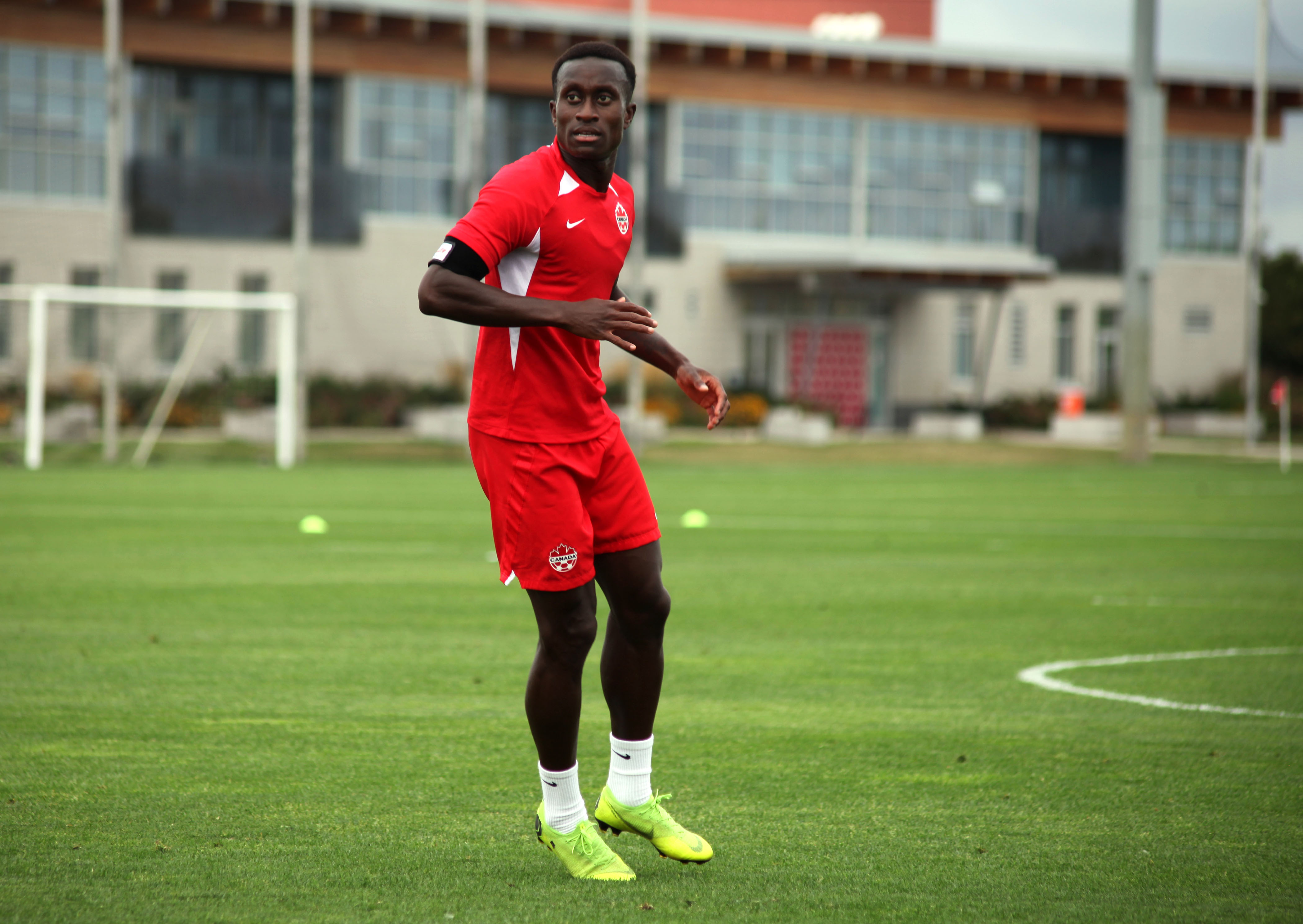 Richie Laryea. (Canada Soccer).
Richie Laryea on Beyond The Pitch: ‘I should sit down and reflect to see how far I’ve come’
2021-08-30
by
Benedict Rhodes, CanPL.ca Contributor (@BTFR17)
News

Ahead of the Canadian men’s national team’s first World Cup Qualifying matches this week, CanPL.ca’s Kristian Jack sat down with several members of the squad on Beyond The Pitch. The first episode features Toronto FC fullback Richie Laryea, who talks about his career thus far, time with the national team, and the road ahead as Canada look to reach the 2022 World Cup in Qatar.

It was evident throughout the episode of Beyond The Pitch that Canada’s squad are a confident bunch, and really believe in one another. The men’s national team program is looking to qualify for the World Cup for the first time since 1986, and believe that this is a great chance to do it, especially coming off an impressive Gold Cup where they very nearly reached the final in what would have been a famous victory over Mexico.

The importance of the upcoming matches isn’t lost on Laryea, who has become a regular for John Herdman since making his senior debut in late-2019.

“We all know how important of a time it is,” he said. “We’re very ready, we believe in our squad, the coaches, everyone behind us. Everyone believes in what we’re able to do, and about to do, and to make this country proud and bring it to heights that it hasn’t seen in a very long time.”

Throughout the conversation, Laryea was adamant that Canada can go toe-to-toe with some of Concacaf’s best sides, citing their recent success at the Gold Cup as an example of that.

“We believe in ourselves, and knew that we could put together performances like that, no matter who we were playing against, and no matter who we had on the field,” said Laryea. “We looked at [the Gold Cup] as a big opportunity for us to put a statement out to the rest of Concacaf, and I think we did that.”

He mentioned that Canada believed before even taking the pitch against Costa Rica in the quarterfinal that they’d win, and that they should have beaten both the United States and Mexico — the two regional powerhouses.

Canada will have chances to redeem themselves in the coming months as all three sides are among those vying for a spot in Qatar.

There’s a sense of unity and cohesion among the Canadian players that makes them comfortable, and willing to fight for each other. Jack likened the joy that players seem to feel when with the national team as almost like “going on vacation with your buddies” every time they’re in a camp.

Laryea, who often plays the game with a smile on his face, was beaming and recalled that he grew up playing with some of his Canada teammates.

“The list goes on and on… now you’re teammates with them. It’s such a cool gel that we have on the national team. Guys can’t wait to get in to see each other.”

Laryea has had an interesting path to the national team. After developing in the renowned Sigma FC academy, which has produced dozens of national team and Canadian Premier League players, he spent some time with the NCAA Division I side at the University of Akron. He was drafted seventh overall by Orlando City in the 2016 MLS SuperDraft, where he’d play the majority of his game with Orlando City B, but also took the pitch 21 times for the first team between 2016 and 2018.

His contract option for the 2019 season was declined, opening the door for a return to Canada with Toronto FC, where he has become a star for club and country. His attacking prowess is there for all to see — he is among the best fullbacks in Major League Soccer at running in behind defenders and causing problems for opposing defenders, and is capable of playing at both fullback positions.

In 2019 John Herdman rewarded him with a national debut, and Laryea has been an important player for him since. A few years ago, he said he never would’ve seen himself in this position, and that overcoming adversity has made him the player he is today.

“I don’t do it often, and maybe I should sit down and reflect to see how far I’ve come,” said Laryea. “My parents remind me, some of my friends remind me. If you would’ve told me at the end of 2018 that I’d be where I am right now — I have a lot of belief in myself, and I think you have to as a player — but with the way things were going I probably would have looked at you sideways. It’s a nice experience and it’s one that I don’t take for granted.”

To watch the full Beyond the Pitch interview with Richie Laryea, click here. Canada begin their World Cup Qualifying campaign this Thursday, September 2 with an 8 pm ET kickoff at BMO Field against Honduras. Tickets are available here, and the match can be watched live on OneSoccer from 7:30.