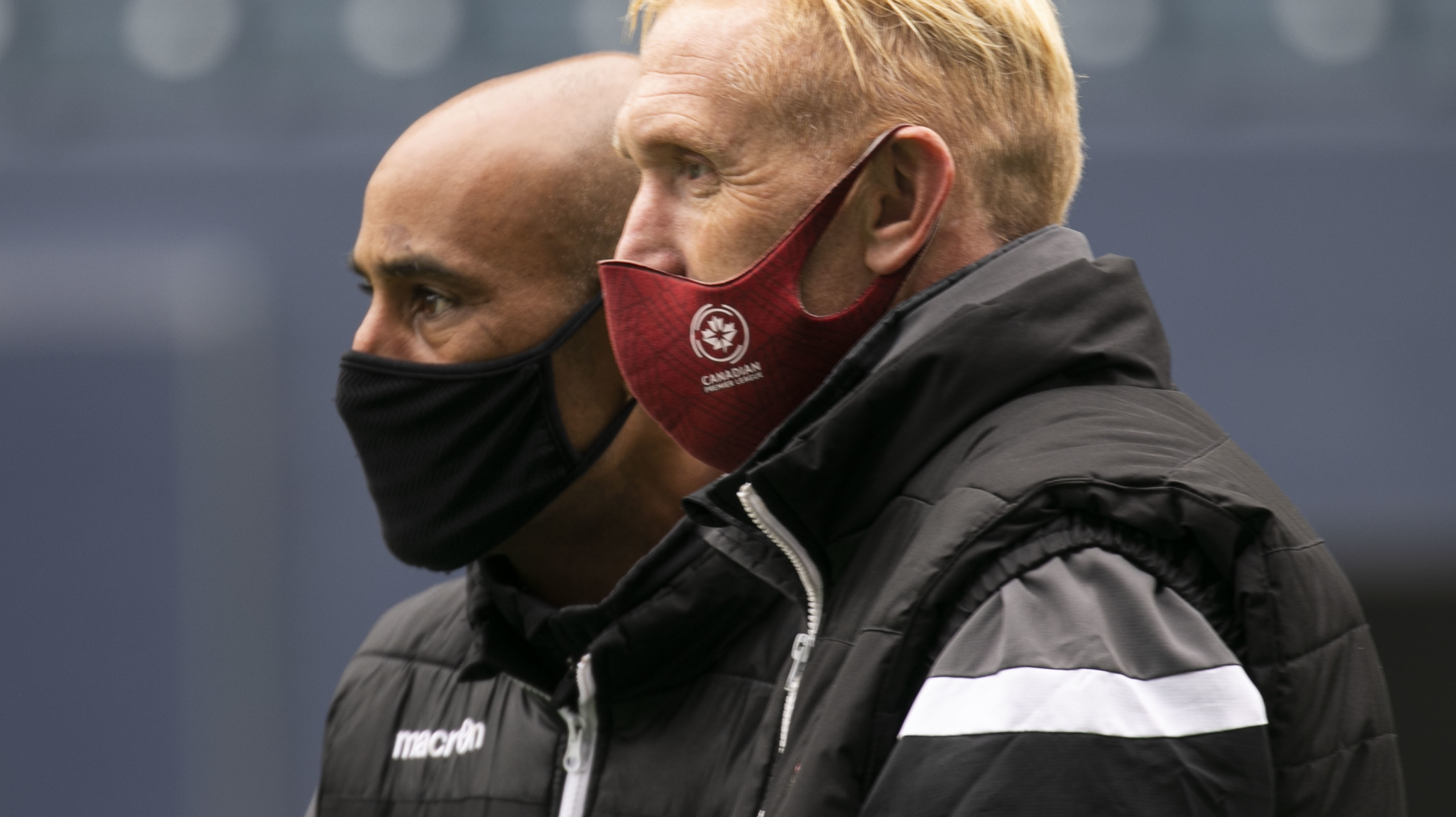 Bringing back 13 players from a year ago, and making six additions, Valour FC has 19 players under contract for the 2021 season.

Unfortunately, the club had to terminate the contracts of Nestor Monge and Ronny Maza this offseason due to visa issues, but signed Rafael Galhardo on Thursday, leaving them with an unused international spot as well. With four spots still left to fill, here’s how Rob Gale’s roster looks thus far.

Last year’s starter in net for Valour was James Pantemis, who was on loan from CF Montreal. Pantemis was impressive, starting all seven of Valour’s matches and picking up a pair of clean sheets in the process. He’s returned to his parent club now, but Valour has brought in another Montreal youngster on loan to replace him. Jonathan Sirois, a 19-year-old, “has a presence and is not afraid to communicate that to his teammates,” according to Rob Gale when they announced his signing. Time will tell if he wins a starting spot coming out of pre-season.

Matt Silva is the other goalkeeper on the roster. He was on the Valour roster in 2020 but didn’t see any minutes on the field. He has a little bit of CPL experience, mostly as a backup for Nathan Ingham at York9 (now York United) in 2019, where he made one appearance — a 2-1 victory over Pacific FC. Before the CPL he played in Sweden and the Philippines, as well as several other clubs in the Greater Toronto Area. The 30-year-old will be looking to win his first starting job in the CPL after not playing much in the past two years.

Panamanian centre-back Amir Soto was signed by the club ahead of the 2020 season, but was unable to join the team due to COVID-19 travel restrictions. The 23-year-old has played for CD Universitario in Panama, as well as Ringkøbing IF in Denmark’s second tier, before signing for Valour. He has also represented Panama on the international stage.

His centre-back partner, as things stand, would be Haiti international Andrew Jean-Baptiste. Jean-Baptiste, 28, was one of the CPL’s best defenders in 2020, playing six of Valour’s seven matches and scoring in their 4-0 win over Atlético Ottawa. He was a strong leader at the back, often playing alongside on-loan centre-back Julian Dunn, helping the club pick up two clean sheets in the process before missing the final match of the season with an injury.

Andrew Jean-Baptiste finds the back of the net in some unspecified, vaguely top-corner-but-not-quite-top-corner (?) spot to give the Winnipegers a 2-0 lead over @atletiOttawa

Another player who played in six of seven matches at the Island Games is midfielder/fullback Stefan Cebara. As with Jean-Baptiste and midfielder Masta Kacher, there was apparently interest from other clubs (including from other leagues) about the 30-year-old, but Valour convinced the Canadian international to stick around for another year. Cebara often played at right back in 2020, as well as suiting up for a match on the right wing.

Federico Peña, after two seasons already with the club, will be returning for a third season. Capable of playing in attack, and at both fullback positions, the 21-year-old played six of Valour’s seven games in 2020, in several different positions, and made eight appearances for them in 2019. His versatility on either side of the backline will be an important tool again in 2021. Prior to moving back to Winnipeg, he spent time in the academies of Belgian sides KAA Gent and Standard Liège.

The final defender on the roster is Arnold Bouka Moutou. After injuring his hamstring in Valour’s first game of the season, Bouka Moutou would take the pitch again in their final game, but hurt himself again, and only ended up playing 70 minutes in 2020. He re-signed this offseason and has been training with Angers in his native France. The Congolese international has played in Ligue 1 for Angers and Dijon, and played in the top flight as recently as 2019, so Valour has high expectations for him next season.

One of two newcomers to the Valour midfield thus far is former FC Edmonton player Keven Alemán. The 26-year-old attacking midfielder, who has four caps for Canada, started all seven matches for the Eddies in 2020, scoring once. He spent the offseason in Costa Rica, with top-flight side Guadalupe FC, where he scored once in 10 matches.

The other new recruit, announced on Thursday, is former Brazilian youth international Rafael Galhardo. Galhardo, now 29, played in the Brazilian top flight for over a decade, including with some of the countries biggest clubs — Santos, Cruzeiro, Grêmio and Flamengo among them. He won the U-20 World Cup with Brazil in 2011, and “will offer a very different dimension to our club and the CPL especially in the attacking phase,” according to Valour’s assistant coach and GM Damian Rocke in the press release announcing his signing.

Versatile midfielder Brett Levis is among the midfielders returning for the 2021 season, after playing five times in PEI. The former Vancouver Whitecaps player was a right-winger in their first match on the island, before playing four matches at left-back to replace the injured Bouka Moutou. Levis got hurt and missed two games himself, but his importance to the side was noticeable. He can curl in set-pieces with the best of them, providing two assists for his teammates from corners in PEI.

Returning for a third season in the Manitoba capital is Raphael Ohin. The 25-year-old should break Valour’s record for most appearances in 2021, as he currently sits two back of Dylan Carreiro and Diego Gutiérrez (who have 31 appearances), both of whom are no longer with the club. The Ghanaian-born midfielder made 22 appearances in 2019, as well as all seven in PEI, where he established himself as a regular starter for the club, and one of its best players.

Masta Kacher has also been brought back, on a one-year deal with an option for a second. Kacher, 24, played six games for the team in his debut CPL campaign, scoring once. A graduate of the Montreal Impact (now CF Montreal) academy, Kacher played several seasons in the USL prior to joining Valour ahead of the 2020 season. His goal against FC Edmonton was one of the best strikes in the entire tournament.

Bringing back a veteran presence in central midfield for a third season, Valour re-signed 35-year-old Jose Galán last month. One of only three players to remain at the club for a third season, alongside Ohin and Federico Peña, Galán has been a leader in the middle of the field, and become a fan favourite. The Spaniard has made 18 appearances for the club, 13 in 2019 and five at the Island Games.

RELATED READING: 3 of José Galán’s most memorable moments in the CPL thus far

Joining Sirois on loan in Winnipeg from CF Montreal is Sean Rea. After signing his first professional contract in late 2020, like Sirois, the 19-year-old attacker moves west to Winnipeg for the 2021 season. Rea represented Canada in the 2019 U-17 World Cup in Brazil and will be looking for a first chance to break out at the professional level.

The club has another young attacker on loan, with 18-year-old winger Jared Ulloa joining from Sporting Cristal in Peru. He can play on either side, and is a “pacy, dynamic winger,” according to Gale.  He has a Canadian father and will count as a Canadian on Valour’s roster, meaning those two could eat up a ton of U-21 minutes as well in 2021.

The third and final newcomer up top is William Akio, signed from the University of Texas Rio Grande Valley. Akio, 22, picked up seven goals and two assists in 10 games last year. Over his three seasons with the school, Akio scored 18 goals and added 14 assists, leaving him near the top of the all-time leaderboards in both categories for the school. He also scored 11 goals in 12 matches for Calgary Foothills FC in USL League Two in 2019.

The rest of the Valour attack have been re-signed from a season ago.

Up top, Austin Ricci will be an important player again for Valour. After spending the 2019 season with York, making 11 appearances, he signed with Valour for 2020 and played in six matches. The 24-year-old drew two penalties in PEI, making some good runs and rarely slowing down his work rate — which impressed Rob Gale: “His willingness to work hard and not give defenders any rest shows he has the potential to be a top striker in the Canadian Premier League,” the Valour boss said when they re-signed Ricci.

Moses Dyer, a New Zealand international forward who played for the club in 2020, is back for a second season. The 23-year-old played in six of Valour’s games, and scored against Forge FC in the final match of their season. He played as a winger, striker and midfielder in 2020, versatility that’s important on a 23-player roster. He has eleven caps for the New Zealand national team since making his debut in 2015.

Last, but certainly not least, is Daryl Fordyce. The 34-year-old Northern Irish-Canadian attacker spent most of his career in Ireland and Northern Ireland before coming to North America, with two stints with FC Edmonton (when they were in the NASL) on either side of nine matches with FC Cincinnati. He spent 2019 with Sligo Rovers in the League of Ireland before joining Valour in 2020. At the Island Games, he scored once, from the penalty spot, in five matches.

Valour has four open roster spots to work with, and are in need of some defenders. Another centre-back or two should certainly be on their shopping list to back up Soto and Jean-Baptiste.

Their midfield and attack can always do with a little more depth, but Rob Gale has some work to do at the back before the season starts.