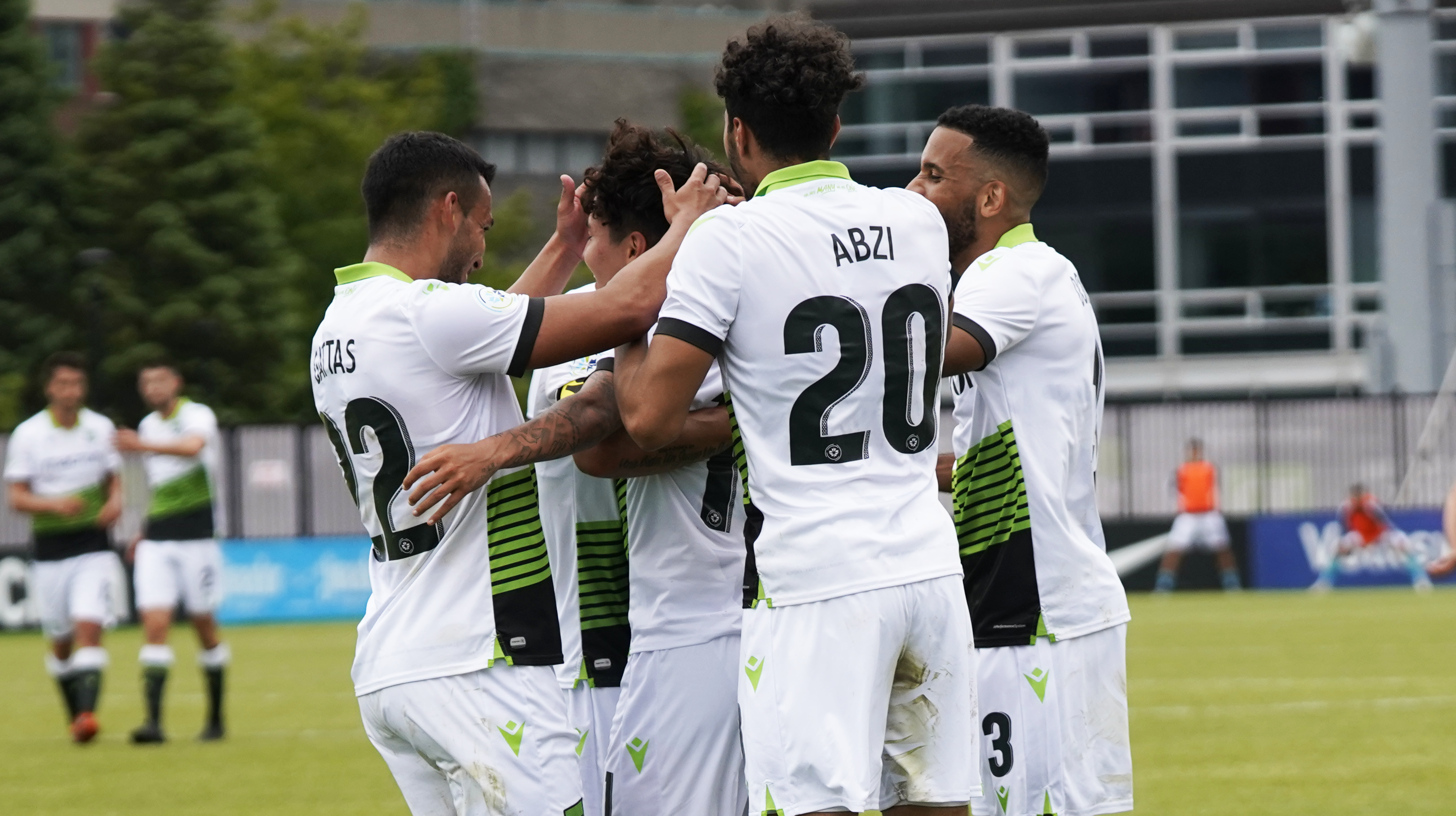 Submitted for your approval: Three teams who could challenge Forge FC for the right to be the one who ends up facing Cavalry FC in the Canadian Premier League championship. These three teams all have minor fixes to make, but are my favourites to make the move to the top tier of the league. You have entered … the contention zone.

It took a while: FC Edmonton

Seven games into the spring season, and we were all wondering what the heck was wrong in the Alberta capital. Great things were expected out of coach Jeff Paulus’s charges, with arguably the most physically intimidating back line in the league and tough-as-nails midfield.

But, in six of their first seven games, the Eddies didn’t score. And they fell towards the bottom of the standings and the CPL.ca power rankings.

Yet, thanks to a three-game winning streak to close the season, the Eddies now hold the title of “team most likely to challenge Forge in the fall season.”

The goals are now coming, and who the heck would have predicted that Oumar Diouck would become the league’s joint top scorer?

“You try and believe in what you’re doing and keep moving forward,” Paulus said. “The team’s never lost their belief and certainly the staff hasn’t. So, even though we thought it would turn around, we don’t want to get too excited. There are still some things for our team to work on. But this group of players is so honest, that we’ll keep working at it. We believe we are a good a side… But we have to keep getting better, because every other team in this league is.”

The steel is showing since Paulus simplified the team’s approach by going to a 4-4-2, a formation that allows the Eddies to emphasize the sheer size advantage they possess over the other teams in the league. The question, an ankle injury suffered by Korean midfielder Son Yongchan is going to keep him out long-term. Can teenager Marcus Velado-Tsegaye carry the load in the Korean veteran’s absence?

With big crowds and a festive atmosphere, we all felt that Wanderers Ground was going to offer one of the best home-field advantages in the league. And, boy, has that placed lived up to the billing. Of the Wanderers 11 points in the spring season, 10 were earned at home.

Success at home is all well and good, but the glass-half-empty crowd will point to the fact that the Wanderers have collected just one draw out of five road games. Being good at home is not good enough to win a league. You’ve got to be able to scratch out results on the road, even when you face the most imposing travel schedule in the league and your injury list is longer than War and Peace.

“You would have to think we have not been good enough away from home,” said Wanderers coach Stephen Hart. “When we’re at home, we’re a difficult team to play and we’ve got results. But, if I’m being honest, I don’t think we’ve been good enough away from home and mainly it’s because of silly errors. And, if we want to win games, we have to cut down on the errors that we are making.”

Proof: The Canada Day loss in Edmonton, where keeper Jan-Michael Williams’ inability to control an initial shot led to the Eddies’ first goal. And the second came after HFX lost possession after a throw-in.

Fit to be tied: York9 FC

York9 is the hardest club in the league to get a read on. When you draw half of your games — as the Nine Stripes did in the spring season — it makes it hard to tell what you’ve got.

But this is what we know: York used set pieces to take FC Edmonton out of the Canadian Championship. Ryan Telfer is always a danger going forward, and the team has pace to burn. And playing on the team’s tiny home pitch, it’s time to develop a style of play that confounds the visitors in those confines.

“We’ve got a hell of a lot of draws over this part of the season,” said York9 coach Jimmy Brennan. “We want to make sure to turn those into wins. These guys will tell you flat-out themselves, we want to compete, we want to win and we want to be in that final. So, we’ll be going all out for that.”

Goalkeeper Nathan Ingham has been right up there with Cavalry’s Marco Carducci and FCE’s Connor James as the league’s best keeper — he might even have the edge. So, right now, Brennan has to be telling his charges is they simply need to be a goal better here and there — and they could shoot into the discussion for the fall.