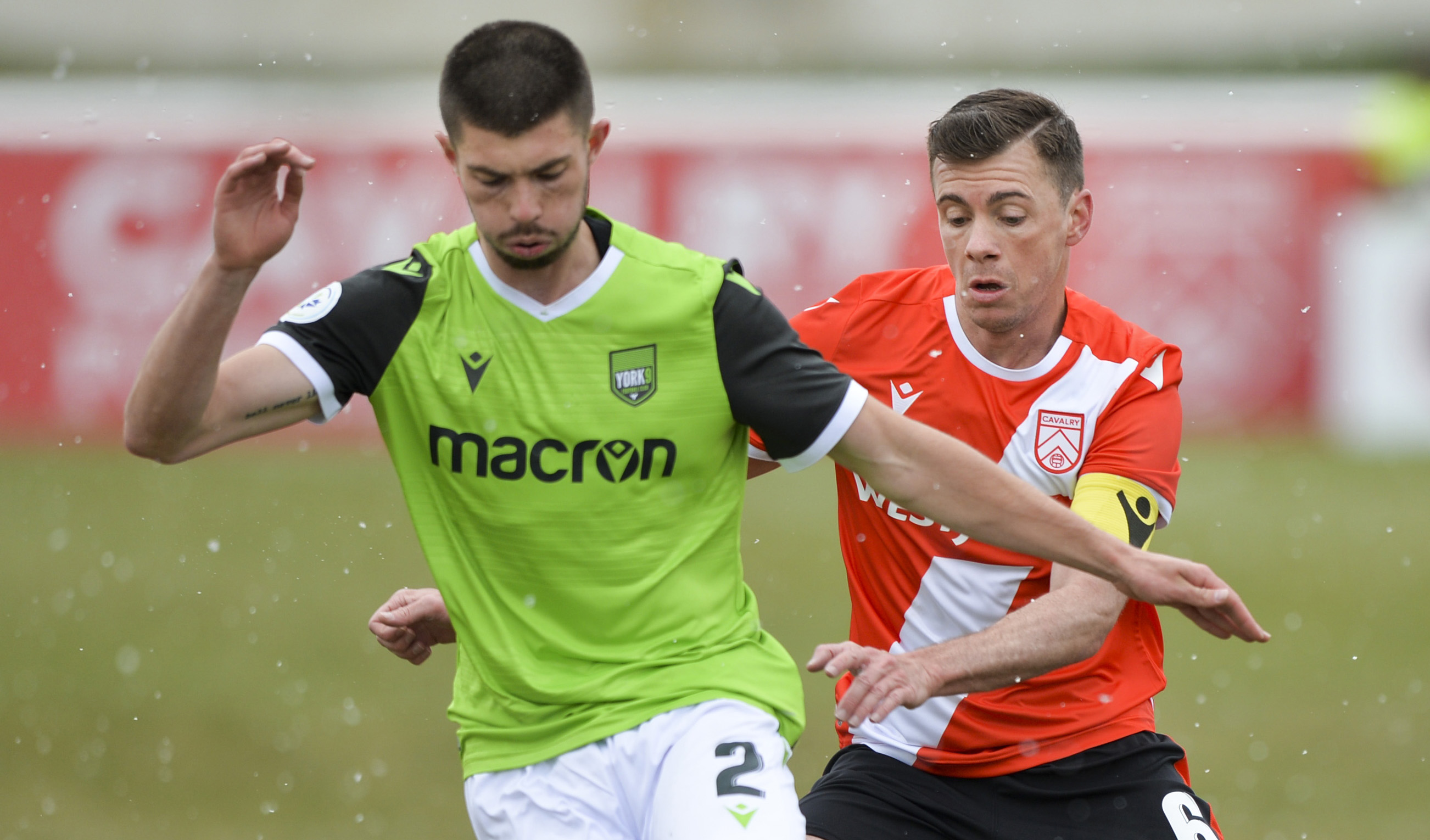 EDMONTON – Ontario’s two Canadian Premier League outfits may not buried yet, but the first heaps of dirt have been shovelled on the spring seasons of both York9 and Forge FC.

In the CPL’s 10-game opening stanza, you can’t afford to have a slow start. Just as you lose a 100-metre dash in the first 20, you can throw away the spring season by not being able to get points in the first couple of games. You might not be able to win the spring season over the first few weeks of the schedule, but you can sure lose it.

Both York and Forge suffered setbacks on the road Saturday, as an injury-decimated Nine Stripes featuring a rebuilt midfield couldn’t cope with Cavalry FC’s constant pressure on the ball and were weak on set pieces. They surrendered two goals on corners in a 2-1 loss.

Meanwhile, a wayward clearance attempt from Forge defender Bertrand Owundi put the ball on a platter for Wanderers’ striker Luis Alberto Perea, who converted the chance and the consigned the Hamilton side to a 2-1 loss in Halifax.

The two ‘905 Derby’ rivals — who kicked off the 2019 season with a draw — each have just a single point after two games. In a 30-game season, or even a 20-game season, it wouldn’t be time to panic. But, in a 10-game spring campaign, these teams have put themselves in a lot of trouble.

We can come up with a target number for the CPL spring season by looking at the history of the North American Soccer League.

In both 2015 and 2016, the NASL’s spring season, like the CPL, saw each team in the league play just 10 games. In 2015, the New York Cosmos earned 20 points to win the spring title, and Indy Eleven won it in 2016 with 18. Both of those were closely contested seasons — so each of the champions needed each and every single one of the points they earned.

So it’s fair to say that, based on a 10-game schedule, 18-20 points is the target for a potential CPL spring champion.

The would mean each of York and Forge have to get 17-19 points out of eight remaining games. That’s an average of more than two per game.

In fact, for Forge, it’s absolutely fair to call Wednesday’s game against Pacific FC a must-win. If Forge doesn’t get three points out that game, the team might not have enough time left in the spring season to get out of its hole.

Meanwhile, FC Edmonton and Cavalry are the only teams boasting 100 per cent records. Sure, they’ve only played a game each, but both are at home for their next games, and both Cavs coach Tommy Wheeldon Jr. and FCE boss Jeff Paulus will be hopeful that their teams can hit the six-point mark by game two.

Paulus was the Eddies’ assistant coach for those 10-game spring seasons in NASL. And he said if the Eddies can win next week, while some teams are falling back, it’s difficult for those at the bottom of the standings to catch the leaders.

“What makes it so tough is that we’ve seen that there’s such parity in this league,” Paulus said. “If we get to six points after two games, and there’s other teams at one, that’s basically two games they have to make up. And in a league that’s so close, with such small margins separating the teams, it’s hard to close that gap.

“We saw it in the NASL, if you start off six points down after two games, it was almost impossible to make up. You think ‘it’s only six points,’ but if it’s two or three teams ahead of you, that’s tough. For us, it’s massive to start the season off with a win.”

The mood is bullish in the mountain time zone. It’s one week in, but in this opening sprint, it’s Alberta who has gotten off the block quickest – the question is, can the Ontario-based sides catch up?