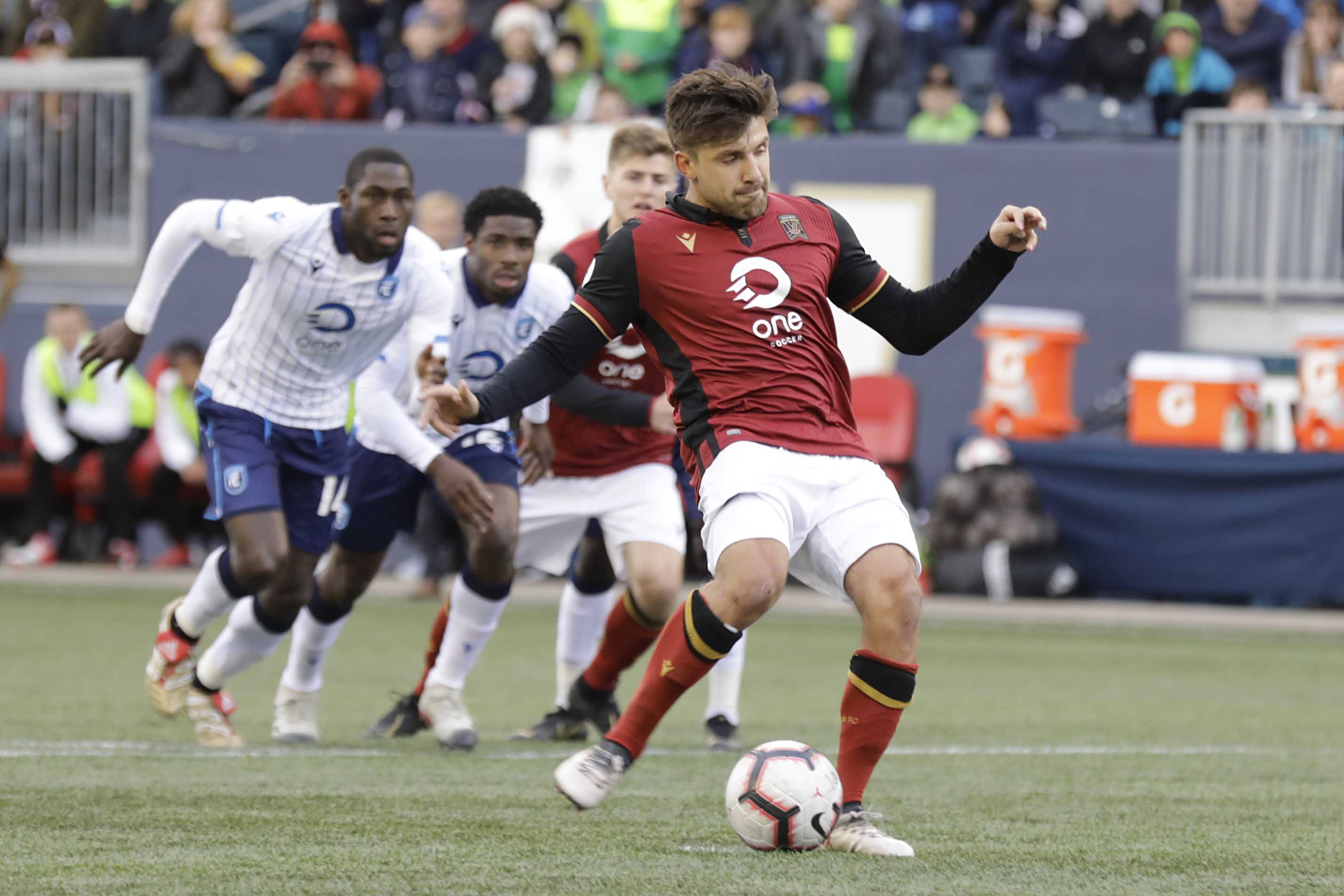 May 4, 2019; Winnipeg, Manitoba, CAN; Valour FC midfielder Michael Petrasso (9) takes a penalty kick in the second half against the FC Edmonton during a Canadian Premier League soccer match at Investors Group Field. Mandatory Credit: James Carey Lauder-USA TODAY Sports for CPL
SANDOR: How much of a role have penalties played in CPL?
2019-08-29
by
Steven Sandor, CanPL.ca contributor
News

A controversial call allowed Pacific FC’s Marcus Haber to step to the spot and score the winner over Valour FC. In Edmonton, York9 FC’s Kyle Porter had his penalty saved, but teammate Wataru Murofushi slotted home the rebound in a 2-2 tie with the Eddies.

Now, there was lots of hue and cry over the Haber penalty; a lot of debates stemming out of replays. Was he fouled in the box or wasn’t he? But, let’s face it, when does a penalty call not generate debate?

And, how much of a role have penalties played in CPL games so far?

Not as much as you may think.

To start the season, we hardly saw any penalties in this new league. It took six games for one to be awarded – Valour’s Michael Petrasso scoring a consolation goal in a 2-1 loss to FC Edmonton. We didn’t get our second penalty until match no. 14.

But, to support the ideas that things in soccer tend to reach some sort of happy medium, things have changed. By this point of the season the rate penalties are awarded in the CPL is comparable to some of the world’s biggest leagues.

So far, 65 matches played, and 19 penalties awarded. Thirteen have been converted. Put that into perspective. In CPL, a penalty is awarded once every 3.42 matches, or 0.28 per game.

So, when looking at the biggest leagues in the world, there’s really nothing that suggests that the way Canadian officials call the game in the 18-yard boxes is any different than their compatriots across the pond. Yes, there was a real penalty drought in the CPL through the first month of the spring season, but now the calls are happening at something close to what we could call a fair international average.

And, really, penalties don’t happen that often, no matter the league. But, the reason we spend so much time talking about them is that they’re such divisive moments. Depending on which team you’re cheering on, the awarding of a penalty is either justice served or grand larceny.

We see fouls differently in the 18-yard box than we do anywhere else on the field — the classic argument of “you can’t give a penalty for THAT.” The admission that, yeah, it’s a foul, but not the sort of foul that should be called if the result is a spot kick. Penalties are proof that we all watch soccer in degrees.

It should be noted that Cavalry FC, the team that won the spring season and is in contention for the fall title, has only gone to the spot once all season long — and missed. That was Dominique Malonga against HFX Wanderers, for you trivia buffs. On the flipside, Cavalry has only conceded one penalty, too.

When it comes to your best chance to see a penalty, buy a ticket for a Valour match. Coach Rob Gale’s men lead the CPL with five penalties conceded, and also lead the league with five goals from penalties.

Petrasso is the CPL’s unquestionable penalty ace, with four goals from the spot. Think about it. There have been 13 penalty goals scored this season, and four have come from Petrasso. He’s almost one-third of the entire league’s penalty-kick production.

When it comes to penalty disparities, both York9 and Forge are at plus-3; each have been awarded four penalties, while being penalized only once. FC Edmonton is at a league-worst minus-3; the Eddies have only been awarded one penalty all season long and have had four against.

Forge and York9 have each not converted two penalties (though the Nine Stripes did score one on a rebound off the goalkeeper). In Forge’s case, the misses haven’t hurt as they came in games the Hamilton side won, anyway.

Heck, the way Petrasso is going, he might not miss two penalties in his CPL career.