EDMONTON — The Al Classico rivalry between Cavalry FC and FC Edmonton will no doubt be made that much spicier thanks to some terrific subplots.

Marcelin said he had offers from both Wheeldon Jr. and FCE coach Jeff Paulus, though the Calgary-based side has since refuted Marelin’s claim he was once coveted at Spruce Meadows. An offer, Cavalry’s camp added, was never made.

Back in Edmonton, though, Paulus calls Marcelin “one of the best signings in the league to this point.”

At 32 years old, Marcelin wanted to begin a new chapter in his career, which included 39 MLS matches with Portland and FC Dallas, then a Best XI selection in NASL. He played four NASL seasons, with Fort Lauderdale and then the Carolina RailHawks/NCFC franchise before contemplating a move to the Canadian Premier League.

The question was, where?

“The league is new,” said Marcelin. “I wanted to be part of of something special that will happen in Canada over the next 10 to 15 years.”

In those four years in the NASL, Marcelin became awfully familiar with FC Edmonton. And that’s the main reason why he chose the Eddies as his CPL destination.

“I knew the team, so I decided that I wanted to go to Edmonton,” said Marcelin. 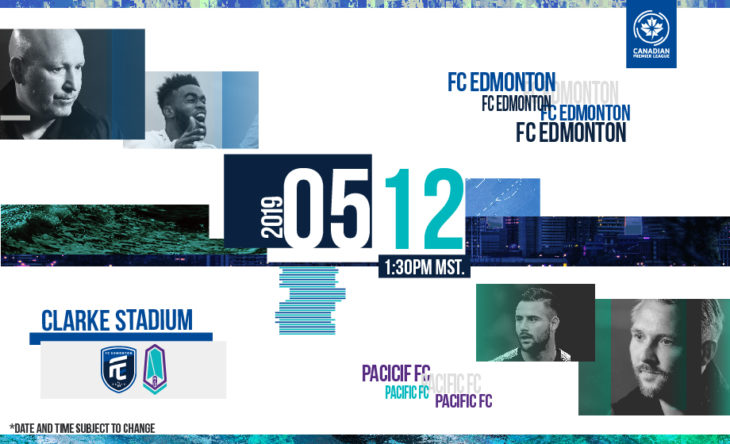 Edmonton will host Pacific in its home opener on May 12. (CPL Graphics)

And he’ll be expected to have an immediate effect on the Eddies. He’ll be expected to bring a steely presence to the midfield; add to that NASL veteran Allan Zebie and the high-pressure, high-paced play of Son Yongchan, and there’s a pretty dynamic triangle taking shape in Edmonton.

Marcelin knows that he’ll be looked upon to bring a veteran presence to an Edmonton team that is filled with young, local players.

“I am going to show my support for my team, I want to help my teammates,” he said. “I want this team to succeed. That’s one thing about me, I don’t like to lose.”

Paulus said that neither Marcelin or defender Ramon Soria, who the Eddies added to the roster a couple of weeks ago, aren’t household names with Canadian soccer fans. So, neither Marcelin, who at one time was one of the best midfielders in that league, nor Soria, who led the back line in Puerto Rico, will create the kind of buzz that maybe, well, they should.

“I know for a lot of people who didn’t follow NASL, they won’t know these players,” said Paulus. “But these are quality players.”

Haiti was down five goals to the heavily favoured Brazilians, but the underdogs didn’t hang their heads. Three Haitians attacked the Brazilian goal, and a rebound spilled right onto the foot of Marcelin, who fired the shot home. Brazil would go on to score two more goals in a 7-1 romp, but, for Haiti, the goal mattered more than the result.

“As a kid, I grew up as a big Brazil fan,” said Marcelin. “That moment, it was fantastic for me.”

But it’s hard for him to even put a finger on what that goal meant for his country. But, in comparison, there are Canadians who still toast Eddy Berdusco for scoring the equalizer in the famous 1-1 draw with Brazil back in 1994 at Edmonton’s Commonwealth Stadium.

“I really don’t know what it means for Haiti, even now,” he said.

Now, he’s excited to see what the Canadian Premier League will do for the sport in another CONCACAF nation.