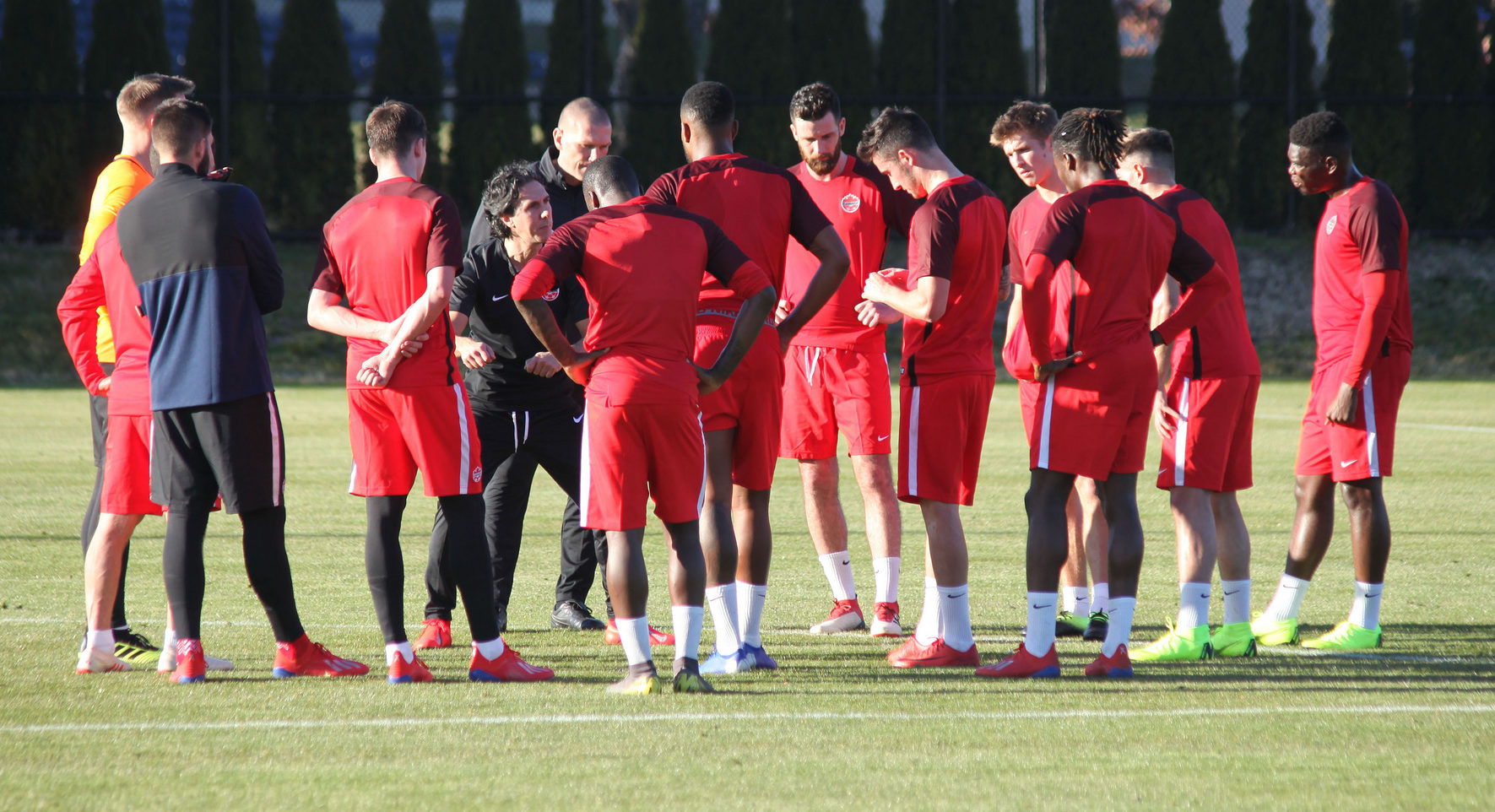 Canada during a training session ahead of a Nations League qualifier with French Guiana. (Canada Soccer)
Sandor: Where does current CanMNT roster stand all-time?
2019-03-21
by
Steven Sandor, Contributor
Canada Soccer

Just turn back the clock a few years and look at the Canadian men’s national team roster.

And, in the case of more than a few of the “attached” players on the team, they were actually getting more minutes in their appearances in Canada shirts than they were with their club sides.

This is a very different Canadian side in 2019.

When coach John Herdman learned that Will Johnson, Scott Arfield and Bayern Munich wunderkind Alphonso Davies wouldn’t be available for this Sunday’s Nations League match against French Guiana (6 p.m. ET, TSN2/RDS), none of his three replacements — Kamal Miller, Jay Chapman and Liam Fraser — came from the depths of the unattached.

Even with Davies gone, Cardiff City’s Junior Hoilett should ensure a dynamic presence on the left side of the pitch. Samuel Piette is an everyday player for the Montreal Impact and can anchor the midfield with the seemingly ageless Atiba Hutchinson, who well into his 30s continues to be a linchpin for Besiktas.

And, the swift Jonathan David, the teenage revelation who has eight first-division goals and two Europa League markers this season for KAA Gent, can either go up top, be played behind the strikers, or be placed into a wide position.

So, this begs the questions: Is this the best or at least the deepest Canadian national side of all time? Is it better than the 1986 side that qualified for the World Cup?

Based on talent, Canada’s current crop stacks up very well against the best Canadian teams. Since Herdman took over as coach in 2018, Canada has scored 15 times in three Nations League qualifying wins over Caribbean opponents and a friendly against New Zealand. Canada hasn’t conceded a goal.

But, and this is a very large but, we can’t fully assess this Canadian side until it faces one of the CONCACAF nations this country needs to leapfrog in order to get to the 2022 World Cup.

Of course, this might change if FIFA is able to expand the 2022 tournament to a 48-team field, but, as it stands, Canada will need to be able to handle the likes of Panama, Honduras, Jamaica and Trinidad and Tobago.

In terms of talking about the best Canadian side all-time, there’s still a case to be made for the crew that finished near the top of CONCACAF, but couldn’t make it to the 1994 World Cup. That World Cup was an especially brutal one for all of CONCACAF.

The region had two spots during the 1994 World Cup qualifying cycle, plus a wild card. The host Americans got one of the spots. That left Mexico as the favourite to take the other, with the rest of the region predicted to be fighting for the wild card slot. Canada got that spot.

Canada was arguably the best nation in CONCACAF outside of Mexico — because there’s a solid argument that this team would have fared well against the U.S. — and the prize was a home-and-away series against the Oceania champs, Australia. The winner of that series had to face Argentina, the wild-card team out of South America.

Canada won the first leg of that series, 2-1, at Edmonton’s Commonwealth Stadium, with the late, great Domenic Mobilio and defender Mark Watson scoring for the home side. Lyndon Hooper’s scored in Australia in a 2-1 loss. Canada lost in penalties.

Remember that this is is the same Canadian side that drew Brazil 1-1 at Commonwealth in 1994, thanks to an Eddy Berdusco goal. This was the same Brazilian side that would win the World Cup.

Remember that, had Canada won its home match against the favoured Mexicans in 1993 (at Toronto’s Varsity Stadium), Les Rouges would have leapt ahead of El Tri and taken the direct CONCACAF berth. Alex Bunbury staked the Canadians to a 1-0 lead in that game, but eventually the home side fell by a 2-1 count.

Had FIFA expanded the World Cup to 32 teams four years earlier, had the U.S. not been hosting the tournament in 1994, you could argue that Canada would have qualified.

That team had Dale Mitchell, who scored 19 career goals for Canada, Alex Bunbury, who would play for most of the 1990s in Portugal and score almost 60 goals, and Mobilio in attack. Mitchell and Mobilio had long, distinguished careers in the hodge-podge North American pro soccer scene of the early 1990s.

That said, the current Canadian side features an attack that has more potential than the 1994 squad.

David has absolutely burst onto the scene, and has already been linked to a move to a German club. Lucas Cavallini has nine goals in 27 matches for Puebla this season. And, honestly, for a Canadian to excel in Liga MX is a feat, with games at altitude, heat, smog and being plunged into some of the most heated rivalries in world football.

Cyle Larin has struggled to get into the Besiktas side this season, scoring just once in Turkish league action. But he regularly filled the net with Orlando City and can be a dangerous physical presence in the box. He has scored three times in Nations League qualifiers, showing signs that he might be shaking off some sluggish performances from the previous World Cup qualifying cycle.

Canada is deep enough that Tosaint Ricketts, a veteran with 16 national-team goals now playing club football in Lithuania, was left off of Herdman’s latest roster.

Herdman truly has a choice in how he wants to attack. Can he use David in a wide area, or have him be more of a Thierry Henry type striker, with speed to run onto through balls? Does he want Larin’s physicality, or the kind of hybrid good-with-feet-and-with-his-head approach that Cavallini brings? Herdman actually has the luxury of matching his attack to his opponent’s defensive weaknesses.

In terms of pedigree, the only attacking group that could compare would be the late ‘90s combo of Bunbury, Paul Peschisolido and Tomasz Radzinski. Peschisolido was a solid scorer in the second tier of English football, and Radzinski was one of the top strikers in Belgium before going to Everton. He scored in the UEFA Champions League, too.

The potential for Canada’s current group is there. Whether or not they surpass the World Cup qualifying groups of 1986 or 1994 depends on one thing: Results.

Because, ultimately, achievement is what defines every generation.