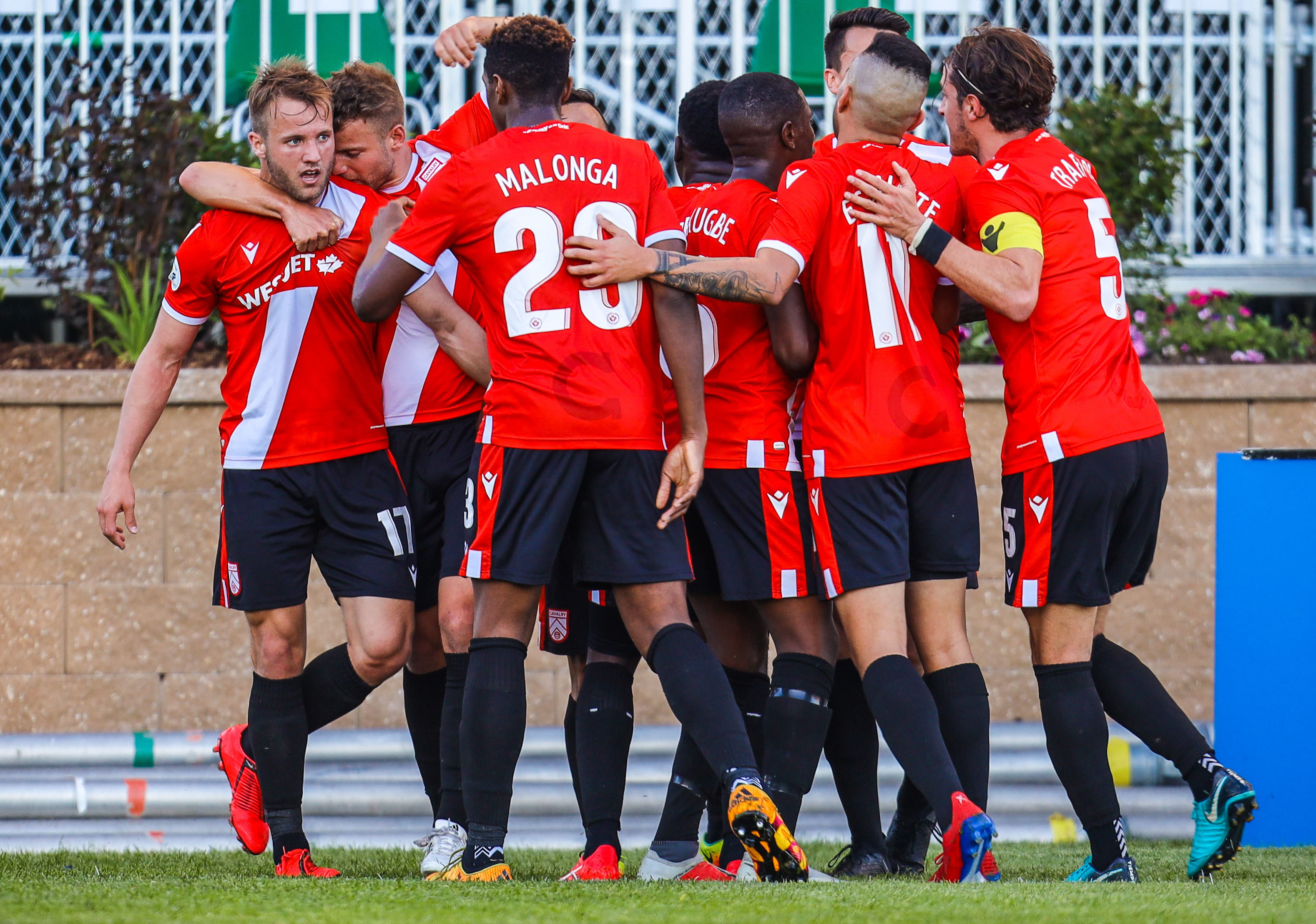 Jun 11, 2019; Calgary, Alberta, CAN; Cavalry FC midfielder Sergio Camargo (10) celebrates with teammates after a goal against the Forge FC in the second half during a Canadian Championship soccer match at Spruce Meadows. Mandatory Credit: Sergei Belski-USA TODAY Sports for CPL
SANDOR: Which EPL club does each CPL team resemble?
2019-07-15
by
Steven Sandor, CanPL.ca contributor
News

With so many iconic clubs, in so many leagues all around the world, it’s impossible to follow just one team.

If you haven’t decided yet which CPL team to support, I offer some comparisons we can draw between the seven CPL teams and seven English Premier League sides.

These are not reaches. This is serious journalism, folks.

OK, CPL Editorial is likely banned from entering Spruce Meadows after this one … since Cavalry coach Tommy Wheeldon Jr. is a fierce Everton supporter. So, Liverpool, then? Sorry!

But, you can’t escape the parallels. The Cavalry have a multi-pronged offensive attack, featuring strong wing play from Nico Pasquotti plus the finishing of Dominique Malonga and Sergio Camargo.

The Cavs play an aggressive, high-pressure style that gives the opposition no time to take a breather. Kinda like, cough, a Jurgen Klopp press. And, with the likes of Mane, Salah and Firmino, Liverpool also boasts that pick-your-poison kind of attack.

And, in any supporters’ section as intimidating as the Foot Soldiers? That perch, behind the goal where the road team enters, the pitch, is loud. And intimidating. They were incredible through 90 minutes of Wednesday’s Canadian Championship match against the Vancouver Whitecaps. They’ve been known to heckle a certain Edmonton-based broadcaster (thanks, guys!). It’s the CPL version of the Kop.

Might we see a Barton St. Battalion member or two embrace Gooner fan tradition soon enough? The Arsenal comparison isn’t too far a reach, we think.

Win or lose, Forge will likely lead the possession battle, will have more attempts at goal and can boast about a lot of style points. Forge’s movement is a beautiful thing to watch. Yet, with all of that skill on display, the Hamilton side didn’t win the Spring season — and was a second-round casualty in the Canadian Championship.

And that’s because of an Arsenal-like ability to play beautifully but have it undone thanks to the concessions of self-destructive goals. In last week’s loss at home to FC Edmonton, poor set-piece defending and an own goal from the ‘keeper Triston Henry put the game on a platter for the Eddies. They took the lead in the second leg of their Canadian Championship series with Cavalry FC, and couldn’t hold it. They played a 3-2 goalfest with Pacific FC this past weekend. And, go back to Forge’s first loss of the season, away to HFX Wanderers, and the winning goal came after a ball was “cleared” to the top of the box, allowing the home team a glorious chance to score the winner.

As good as Forge can be, the team has to clean up its self-destructive tendencies, or else, like Arsenal, it will look back at the “what if?” games and rue how they cost the club a title.

Ask around the league, and you’ll hear players whisper that Forge isn’t going to win any popularity contests, either. As one of the first franchises of CPL, there’s no mistaking that Forge get a lot of attention, just like Arsenal are often maligned for being the “home” team of the royal family.

#COYS – Come On You (Nine) Stripes

Of course you’d read this and say, “Well, he already called Forge FC the CPL version of Arsenal, so of course the other southern Ontario team has to be Spurs.”

But it’s not just the obvious. Like Tottenham this past season, York9 has had gone through some emotionally draining, hand-wrenching Cup games. And, like Tottenham, a lot of their Cup games feature a lot of frantic action late on. Up 3-2 on aggregate to Edmonton, the Nine Stripes had to repel a last-ditch set piece to wrap up the tie. Then, there were extreme fireworks of last Wednesday’s 2-2 draw with the Montreal Impact, where the game absolutely exploded in the final 20 minutes.

Well, maybe not Leicester City of last season, but the Claudio Ranieri-led Foxes that won the Premier League back in 2016.

If you’ll recall, Leicester City not only established the natural order of the big-money teams competing for season-end’s honours, but the Foxes did it in a way that confounded the stat wonks, who couldn’t help but notice that this upstart team won games without even coming close to having more of the ball than the opposition. Leicester defied the thinking that possession = dominance.

Blue is the colour

Eddie, meet Chelsea. No, this isn’t a generic rom-com.

The comparisons between FCE and the pride of London goes deeper than the blue uniforms. FC Edmonton’s winning streak was snapped at four with a 2-1 loss at York9 this past weekend. The team’s big change in fortune came after coach Jeff Paulus — a Liverpool fan, we have to say — switched to a more pragmatic 4-4-2 formation. And, no matter who has coached Chelsea since Roman Abramovich bought the team, the Blues have won Premier League titles, a Champions League, and a Europa League with a rather pragmatic, results-first, beauty-second style.

Edmonton is becoming a harder and harder team to break down. York9’s winner from Ryan Telfer didn’t come from sustained pressure; it came on a quick counter just seconds after the Eddies struck the post.

It needs to be mentioned that Paulus is also a devotee of the way Didier Deschamps manages the French national side. And what Premier League team did Deschamps once play for? Yup, the Blues.

Glory, Glory to the Island

Like the Red Devils, the Westernmost team in the CPL can look to a long injury list, too; Marcel de Jong was ruled out before the season even started. Hednrik Staroszik was supposed to be a huge part of the back line, but he’s spent the majority of the campaign in the infirmary, making his return in Saturday’s 3-2 loss to Forge FC. Coach Michael Silberbauer has been forced to use young players in the back.

Meanwhile, according to PremierInjuries.com, Manchester United lost players to injuries 61 times in the 2018-19 season, the most in the Premier League.

Could the Toon Army ride to glory in Manitoba?

It’s no secret that St. James’ Park is home to some of the most loyal fans in the Premier League. And, with an average attendance of well over 6,000 fans per home date, Valour FC has already built a strong, loyal following.

Of course, finishing at the foot of the spring-season table is a disappointing pill for the club to swallow. But, in promising Canadian players Michael Petrasso and Marco Bustos, the foundation is there to make some needed improvements for the fall season. There are questions of where the goals will come from — but this is a team that you feel should be better than where it is right now. And that’s kinda how we always feel about Newcastle, don’t we?