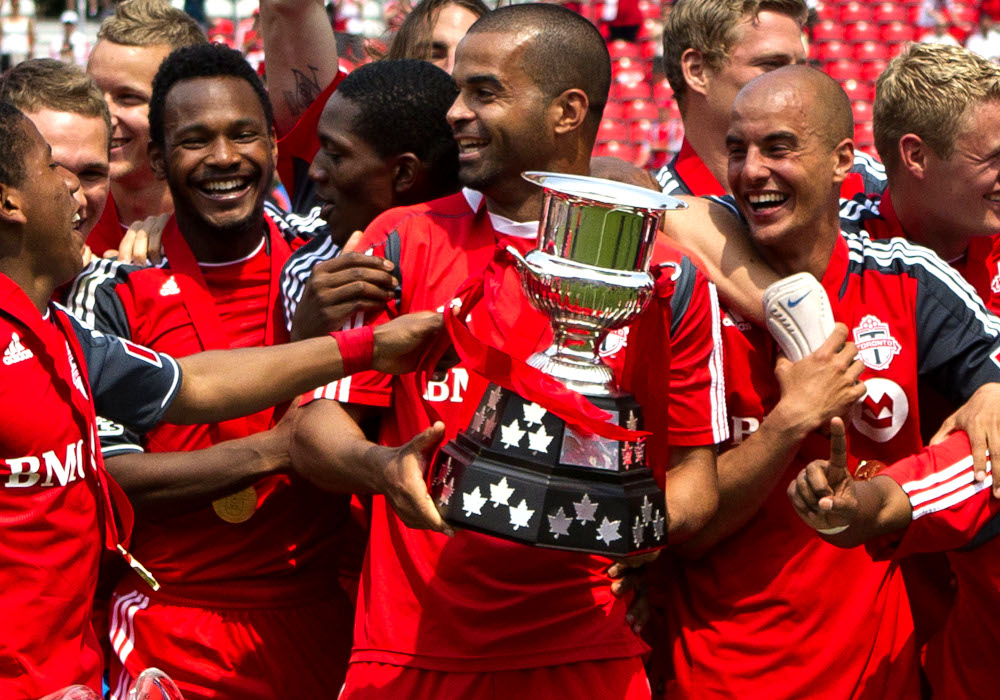 There’s a certain kind of magic that comes with a domestic Cup – and we’re about to get a whole lot more of it.

This year’s expansion of the Canadian Championship tournament to 13 teams, spanning six provinces and five leagues, is going to bring the unique and unpredictable excitement of Cup play to more corners of our nation than ever.

But if you’re wondering just what this competition is about and why it matters, let me explain – starting with the trophy that the winning team will hoist.

The Voyageurs Cup was created in the aftermath of Canada’s surprise win at the 2000 CONCACAF Gold Cup. The Voyageurs, Canada’s supporters’ group, commissioned the trophy and, from 2002 to 2007, awarded it yearly to the top Canadian team in the old United Soccer Leagues A-League.

When the Canadian Championship tournament was created in 2008, it was decided that the winner would receive not only Canada’s berth in the CONCACAF Champions League, but also, the right to lift the Voyageurs Cup.

From the start, the tournament produced memorable moments, from the Montreal Impact using their 2008 win as a springboard to a Cinderella run in the Champions League, to Toronto FC’s near-miraculous emergence as 2009 champs, to the Vancouver Whitecaps delighting a sold-out home crowd by breaking a 13-year hex to claim their first Voyageurs Cup in 2015.

Just last year, Toronto FC claimed its seventh Canadian Championship title in one of the most thrilling finishes in this – or any other – competition’s history, with Sebastian Giovinco’s last-gasp winner sending BMO Field into absolute delirium.

While the “big three” have reigned supreme thus far, the newcomers have made some noise too. The Ottawa Fury notched a famous first-leg win over their provincial rivals, TFC, in the 2016 semifinal round, while FC Edmonton came heartbreakingly close to knocking off their favoured opponents and reaching the final in both 2014 and 2015.

With the tournament now open to teams from League1 Ontario, PLSQ and the Canadian Premier League – and the potential for further expansion in 2020 and beyond – it’s anyone guess what sorts of rivalries and storylines will emerge.

But despite all the competition’s changes, one element has endured. In a nod to the trophy’s tradition, a member of the Voyageurs is still present each year to help hand off the hardware at the end of the final game.

Things, however, don’t always turn out as hoped.

In 2013, the Whitecaps were minutes away from claiming the title on home turf. But when they conceded and lost on aggregate, it consigned the Voyageurs member tasked with presenting the trophy (himself a Whitecaps fan) to a moment of infamy for his understandably dour reaction.

Three years later, with the second leg of the final again at BC Place, there was a plan to avoid a similarly wrenching moment. For the showdown between the Whitecaps and Toronto FC, there were two potential trophy presenters on hand – one the leader of a Whitecaps supporters group; the other, a born-and-raised Torontonian now living on the west coast.

As it happened, that latter individual was me.

In the game’s waning moments, with Vancouver up 2-1 on aggregate, we both made our way down to field level. As the four minutes of stoppage time ticked down, Whitecaps substitutes anxiously paced up and down the sideline, desperate for the final whistle. I’d accepted my role as a spectator in the impending victory celebration, until …

The instant the ball left Will Johnson’s boot, I knew where it was headed.

As the sold-out stadium fell deathly silent, I unconsciously sprinted away to the concourse area, shrieking like a banshee, knowing I’d be the recipient of some dirty looks (and possibly an angrily tossed cup of beer or two) if I’d stayed anywhere near the field.

Suffice it to say, based on experience, that this tournament holds a special place in my heart. But based on everything I’ve seen over the last decade, I know I’m far from alone on that front.

After all, as Canadians, this tournament is uniquely ours – not just because a fan gets to be part of the championship trophy celebration, and not just because it provides the forum for domestic matchups we’d never get to see otherwise, but because it’s our country’s tangible link to the wider world of the beautiful game.

Canadian teams (Montreal in 2015 and Toronto in 2018) have come within a whisper of winning the CONCACAF Champions League and heading to the FIFA Club World Cup, a competition whose recent champions include Real Madrid, Barcelona and Bayern Munich.

Just think: one day, you could be handing off the Voyageurs Cup to your local Canadian Premier League club for winning the Canadian Championship, seeing them off on a journey to face off against the best teams in our region – and, perhaps ultimately, the world.

If that’s not cup magic, I don’t know what is.