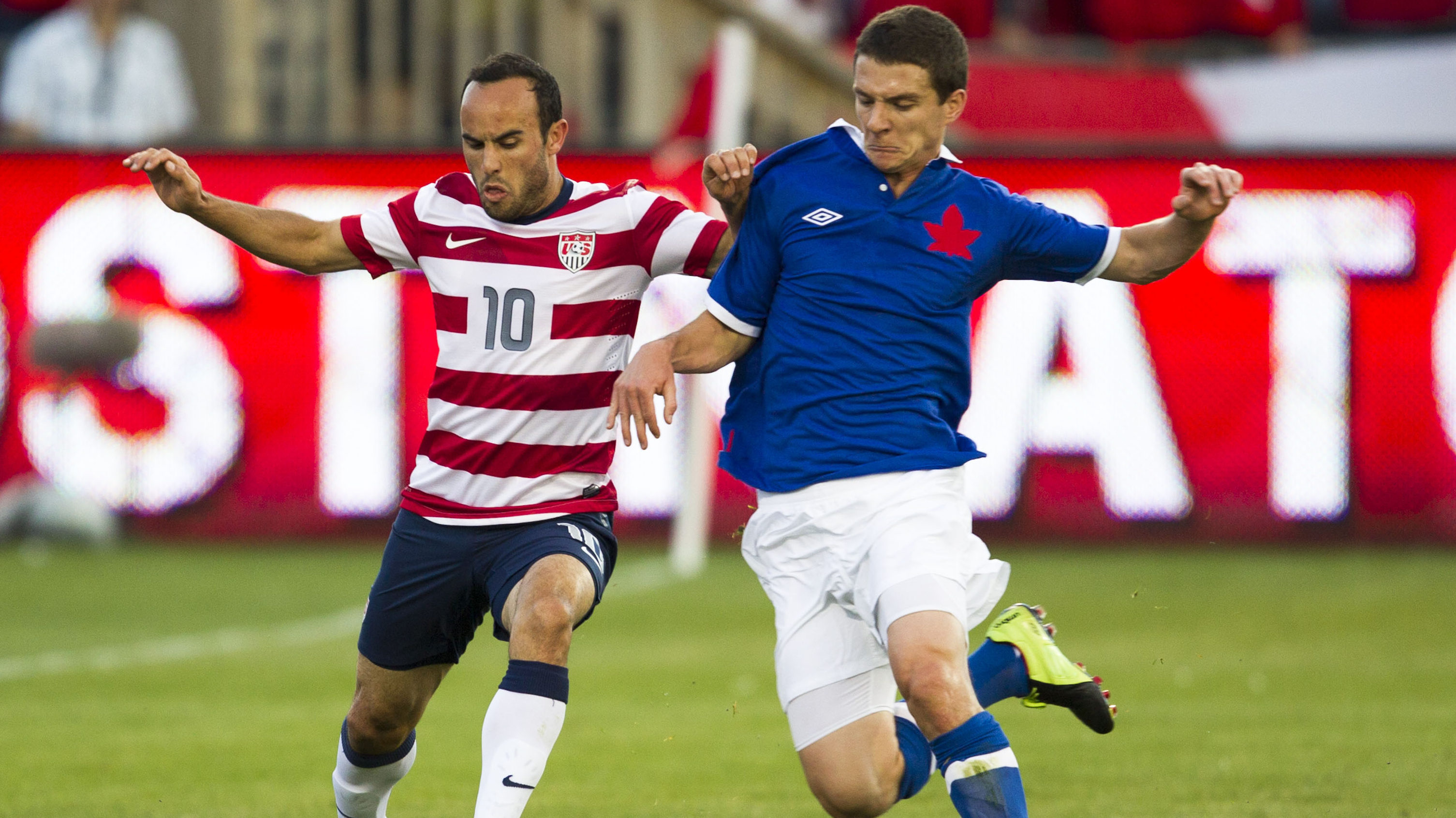 Landon Donovan and Will Johnson battle for the ball during Canada Soccer's Centennial Match at BMO Field in 2012. (Canada Soccer / Paul Giamou).
Squizz’s burning question: How would a 2012 CanMNT fan react to 2019?
2019-10-09
by
Daniel Squizzato, Contributor
CanMNT News

Honestly, there’s really only one soccer-related thing on my mind at the moment: My excitement-slash-compulsive-fear about Canada’s upcoming CONCACAF Nations League match against the U.S.

I think it’s fair to be super focused on that showdown, given that these next two matches — Tuesday’s clash at BMO Field, plus the “return leg” a month later in Orlando — will largely determine not only our fate in Nations League play but also how realistic a shot we have at making the 2022 FIFA World Cup.

It’s not hyperbolic to call this one of the national team’s biggest games of the century. Yes, I could have just said “in the last 20 years” but “century” sounds more impressive. Just be glad I didn’t say “millennium.”

The last game of this magnitude was on Oct. 16, 2012, when Canada needed just a draw in Honduras to advance to the final round of World Cup qualifying. Chances are you know what happened, and are now having awful flashbacks. Apologies.

In case you’re not, take a moment to look it up — and, if you’re not too scarred, please, read on.

Now, the horror in Honduras wasn’t the only match Les Rouges played in 2012; it was one of 12, most of which went pretty decently. One of those was the Canadian Soccer Association’s “centennial celebration” match on June 3, against the Americans at BMO Field.

It was a well-contested scoreless draw, and as someone who watched that match from the south end of the stadium, it’s a match that’s been coming to mind a lot as we approach the next installment of the big cross-border rivalry. So, that’s my roundabout way of saying that I’m wondering just one thing this week:

What would the 2012 version of me think about where the CanMNT is at?

First, a disclaimer: if I had the time-travelling capacity to talk to a seven-years-younger version of myself, I would definitely restrict the conversation to Canadian soccer. I wouldn’t want to terrify him with the truth about what else was about to unfold in the world — and frankly, he wouldn’t believe me anyway.

So, given that CanSoc is all we’d be talking about, he’d have plenty of questions.

“Will Josh Simpson ever get back with the national team?” would probably be among the first, given that the erstwhile Canada winger had suffered what turned out to be a career-ending injury shortly before the Canada-USA friendly in 2012. Simpson was honoured by the home side before the start of that match.

I’d have to tell younger me, sadly, that Simpson would never again wear the red and white, but that he would go on to be a co-founder of a new professional club on Vancouver Island…

“Really?” younger me would ask. “So we’re actually going to get a professional league again? Like, for real?”

“There’s really gonna be a team in Halifax? Sweet!”

“So you still have a lame sense of humour in the future?”

“What about the national team? Will there be guys from that new Canadian league on it?”

Sure will. There’s a kid who’s about to start school at a small liberal arts college in Kansas. In the future, he’ll be playing for FC Edmonton—

Um, kinda. Don’t interrupt. Anyway, his name is Amer Didic and he’s going to be really important in helping give the team more depth at central defence.

“More depth at defence? Lol, whatever.”

It’s 2012, people aren’t using “lol” in out-loud sentences yet. Besides, everything’s going to be on its head seven years from now. Defence is going to be up in the air, while Canada’s going to have more attackers than it knows what to do with.

“Uh huh, whatever. Next you’re going to tell me Junior Hoilett committed to us.”

No really, he did. And that opened the floodgates. Now we’ve got a whole bunch of guys who could have played for other nations, but chose us instead. Plus we’ve got two teenagers tearing it up in Europe. One’s killing it in Belgium; the other went from the Whitecaps to Bayern Munich in the biggest transfer deal ever in MLS.

“Like, the same Whitecaps team that just started in MLS last year?”

Yes; also, I told you not to interrupt.

“Sorry. But, speaking of MLS, you’ve gotta tell me — Toronto FC is the worst team in the world right now. Do things ever get better?”

Oh, buddy. I’m not going to spoil anything. But when Canada and the USA meet again in 2019, the biggest midfield battle is going to be between Jonathan Osorio and Michael Bradley.

I—look, the point is, they’re both really good and they’ve both played together with TFC for a few years now, and one is Canadian and the other is American.

“Alright, so, Toronto FC gets good, there’s a new Canadian pro league, the national team is getting all kinds of contributions from different guys playing both domestically and abroad… sounds like an entirely different world. Wait, you said Stephen Hart’s managing in the Canadian league; who’s managing the national team?”

“Ha, that’s funny, they just hired a guy to manage the women’s national team with that same name. What are the odds?”

Yeah, what a funny coincidence.

“Well, it sounds like the future’s looking pretty bright — so, I’ve gotta ask… we’re gonna make this next World Cup coming up in Brazil, right?”