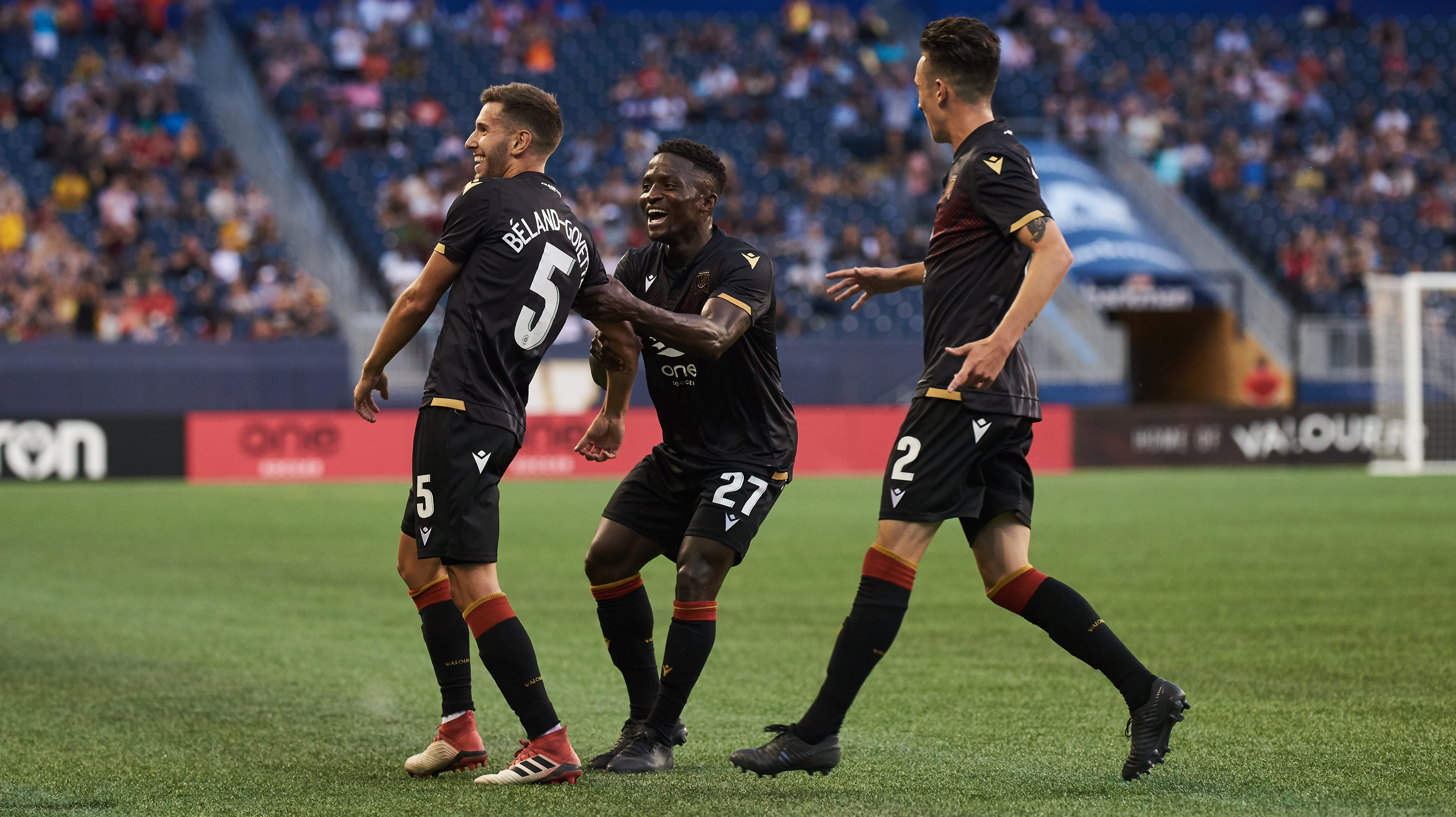 Forge claims top spot, Cavalry falters for the first time in quite a while, and the Fall portion of the 2019 CPL season remains wide open as we approach the midway mark of this second stanza, with four teams in touching distance of No. 1 – and the berth in the 2019 CPL Championship that it affords.

Bobby Smyrniotis’ side enjoyed a week filled with action, plucking a pair of 1-0 victories against admirable foes and impressing in both performances – we’ll break that down further in our first takeaway – but there’s no rest for the wicked, as they say – Forge is back in action against Honduran outfit C.D. Olimpia this week, and will travel down to San Pedro Sula for a Leg 2 battle with this CONCACAF League foe on Thursday.

Before we delve into this topic too much, do yourself a favour and give our Marty Thompson a read as he breaks down some of the finer talking points of the Fall season – in which he argues that, should the Fall be adjudged in similar fashion to the 10-match Spring sprint, Forge would be sitting pretty the same way Cavalry did in our opening stanza.

It’s certainly an interesting thought exercise, but the Fall is eight matches longer, and as such, there’s still plenty of time for teams like York9, FC Edmonton, and even Pacific FC to mount their claim – and, of course, for Cavalry to course correct and return to the summit, too. I’d argue that, in football, a six-point gap is about as wide a margin as one could reasonably see while still remaining a contender, and that’s exactly how many points separate Forge from 4th and 5th-placed outfits Pacific and Y9, respectively. Beyond that? It becomes a bit trickier.

Ultimately, the Fall season has become Forge’s to lose; they have a point and a game-in-hand on Cavalry, and come out of this week having defeated their closest competitor, as well as Olimpia in Leg 1 at Tim Hortons Field; confidence will be high, and with players like Giuliano Frano, Triston Henry, Anthony Novak, and particularly Jonathan Grant emerging to the forefront – coupled with David Edgar’s acquisition – there’s little reason to doubt the Hamiltonian side’s resolve down this final stretch.

It’s easy to fall into the idea that Forge were favourites at home against Honduran outfit Olimpia in Leg 1 last week; the orange-clad side took on a depleted team that was missing several key starters, and looked comfortable throughout the first 45 minutes of play.

But, let’s be clear – a win was neither guaranteed, nor likely, for Forge FC. This victory ranks among the most admirable in CPL history, even if it doesn’t bare the same sentimentality as Cavalry’s victory over the Vancouver Whitecaps, and even if Forge did so with 10 Canadians, as Smyrniotis proudly proclaimed, post-match.

Leg 2 will be oh so fascinating to watch because of two key factors: The first is that Olimpia’s side will likely be renewed with all the players that couldn’t travel to Hamilton – and there were plenty – and, as such, Forge will go into this second leg without being able to really scout their opponents; certainly, familiarity will be thrown out the window, if Pedro Troglio makes as many swaps as we anticipate. Secondly? Forge isn’t traveling to Tegucigalpa, the home city of Olimpia, but will instead take on their Honduran opposites in San Pedro Sula, which, if you’re a long-time onlooker of the Canadian soccer story, isn’t exactly riddled with great memories.

On Saturday, Pacific FC welcomed its faithful fans back to the familiar confines of Westhills Stadium, albeit with a twist in the form of a brand spanking new grand stand adorning the side of the pitch, ready to embrace the rowdy crowds of Vancouver Island. To that end, Michael Silberbauer’s side made sure to give the audience a rollercoaster drama for a show, going down 1-0 to Valour FC’s Michael Petrasso, before super-sub Marcus Haber came onto the field and saved the day with a brace, giving the Tridents a 2-1 win.

And so, Pacific FC has wrapped up its homecoming story with a three-point crown, and all is good with the world again.

Except … Haber has now thrown himself back into the mix for a starting role up top. Based on his stature and goal-scoring ability, one would presume the ideal pairing includes a pair of wingers up top. But, the league’s top scorer, Terran Campbell, would also occupy that same spot. Sure, you could play them together in a sort of 4-4-2, but can these two play off one another, instead of moving into the same channels? They are quite identical in style, after all.

It’s a dilemma Silberbauer must now ponder; how best to line his team up? If you recall, our Martin Bauman pondered this same question well before the match; back then, it was a hypothetical. Now? It’s the most pressing issue at Pacific, tactically.

On Sunday, Cavalry FC and FC Edmonton crossed the threshold of 1,000 cumulative minutes for Under-21 talent over the course of a season, thus ensuring that all seven Canadian Premier League sides have afforded their young, up-and-coming talents with the minimum minute requirement outlined at the start of the year.

With 10 games to go, and with some clubs (we see you, Pacific) putting up absurdly high numbers, it’s clear that this 1,000-minute threshold was never going to be a barrier of entry in a league literally built for these very talents. So, I say we pat ourselves on the back for a job well done, and give credit where its due to talents like Malyk Hamilton (Cavalry), Easton Ongaro (FC Edmonton), Noah Verhoeven (Pacific), Diego Gutierrez (Valour), Tristan Borges (Forge), Diyaeddine Abzi (York9), Zela Langwa (HFX Wanderers), and the many, many more young Canadians who now call this league home.

3. War cry, or cry of frustration?

York9 FC conceded a second goal to FC Edmonton on Sunday and Y9 goalkeeper Nathan Ingham’s reaction just about said it all (0:18 mark).

? @EastonOngaro slides a cheeky one by Nathan Ingham off an @FCEdmontonNow corner kick! @York9FC chasing again!

Can you blame him for this touch of rage? Ingham has been on the receiving end of a few howlers of late, in particular, a pair of open net goals from midfield in consecutive losses at York Lions Stadium. But this particular goal seemed to draw his ire more than the aforementioned two, as they came in a critical juncture against the Eddies, and could have spelled defeat if not for a bizarre Ryan Telfer goal late in the game to equalize.

A touch of frustration seems to be creeping into the Nine Stripes camp, as Ingham conceded yet another go-behind goal, and a quick look at the standings have York9 tied with Pacific FC with the most goals conceded in the Fall, at 15 apiece. Certainly, he’d have liked a better showing on his “nostalgic” return to the familiar confines of Clarke Field.

While you can’t always blame the goalkeeper for that particular stat – particularly Ingham, who made a number of game-saving stops against the Eddies – one must wonder if York9’s defensive stoutness is starting to fall by the wayside, even if goal-scoring has been an up-and-down issue all season. Finding balance is the name of the game for Jimmy Brennan’s side now.

… Louis Beland-Goyette’s absolute rocket of a shot, please? Valour FC kicked off the week that was with a 3-1 victory over FC Edmonton, but it was Beland-Goyette who stole the show, smacking home an astounding effort from well outside the area. At the time of this writing, Beland-Goyette’s goal is the clear favourite in this week’s CanPL Fan Pick, easily beating out Marco Bustos’ own effort in that match, as well as Julian Buscher’s free kick goal for Cavalry. At this point, we’re probably talking Goal of the Year nods for Beland-Goyette, too.