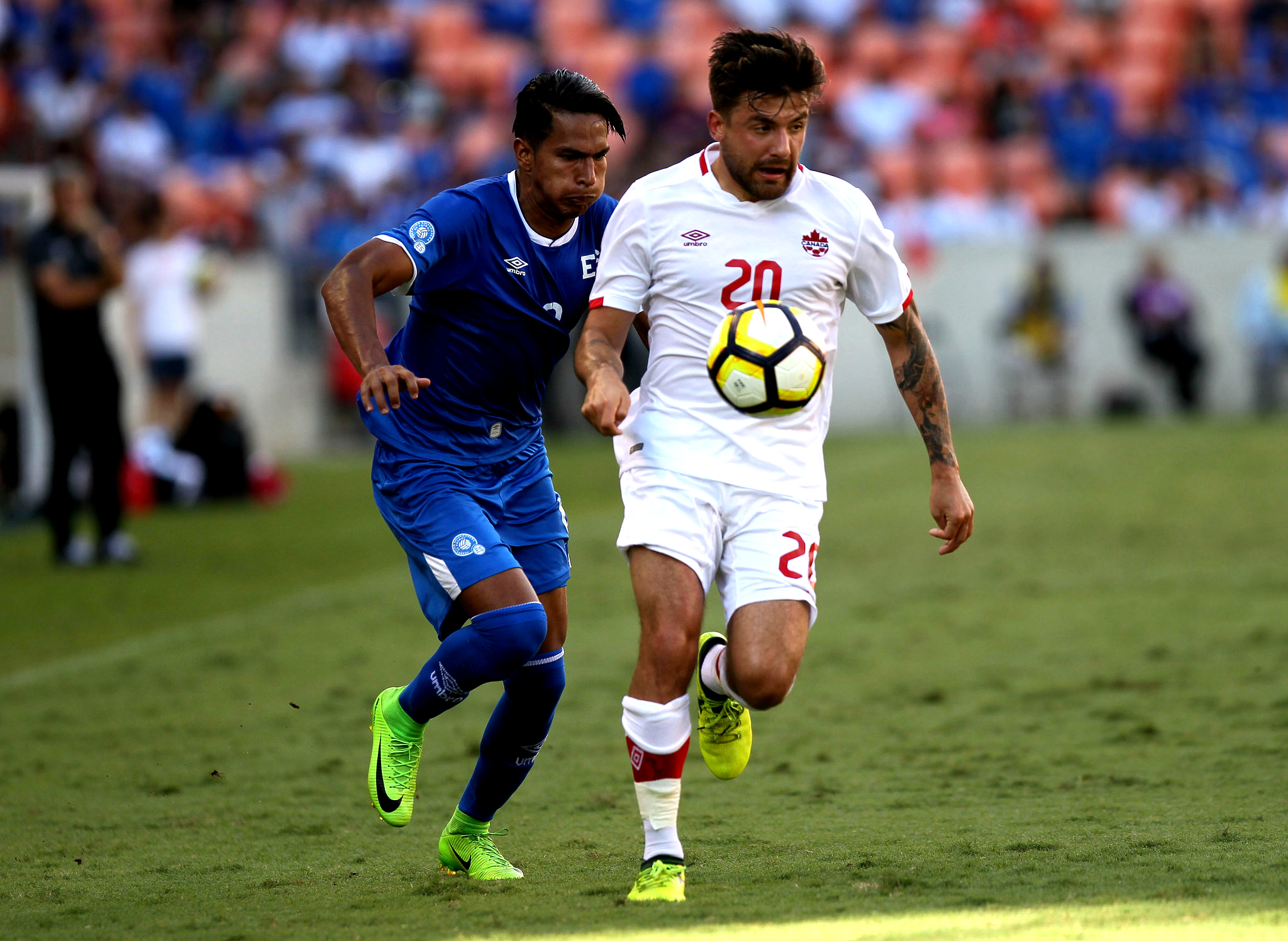 Valour's Michael Petrasso during a 2017 friendly against El Salvador. (Canada Soccer)
The other guys: Which CanMNT members could earn a recall?
2019-03-23
by
Marty Thompson, Digital Content Editor (@martythompson_)
Canada Soccer

The biggest surprise? Will Johnson, who earned a recall following a solid early showing in the 2019 MLS season.

Though he has since been replaced due to injury, Johnson’s selection showed a way back for former Canada mainstays who are navigating the deepest player pool in recent memory.

Here’s a list of others who could get a look ahead of this summer’s Gold Cup and Nations League later this year.

There isn’t much room across Canada’s forward line, but Tesho Akindele would be a decent shout to carve out a spot in 2019. The versatile attacker has already found his footing at Canadian-friendly Orlando City, recently scoring an equalizer for his new club in a 2-2 draw with New York City FC. A consistent performer in MLS, the 26-year-old can feature almost anywhere up front, making him a useful option for Herdman. Akindele hasn’t enjoyed lengthy stints with Canada, either, playing a full 90 minutes only once (0-0 vs El Salvador in 2015 Gold Cup) over 14 appearances.

Another player who hasn’t had a decent run with the men’s side, Chicago Fire wideman Raheem Edwards could be another useful option. If Canada’s defence continues to stabilize and improve, installing Edwards at left or right fullback wouldn’t seem like such a risk. Quick on the overlap, the 23-year-old could be a great wide partner to Junior Hoilett or Davies. Edwards has proven himself in that role, having previously stood out as a wingback for Toronto FC. Oh, and he scored for the Fire last week.

The first CPLer on this list, Forge FC’s Kyle Bekker can certainly add something different to Canada’s midfield. Maybe the best passer in the CPL, Bekker can, in the right midfield, roar ahead and pick apart defences. He’s also one of the best set-piece takers in Canada’s reach. While it’s unlikely Herdman would look to Forge’s talisman this early in the CPL season, when fit — and potentially in the midst of a good season — Bekker and his 18 caps worth of experience would be hard to glance over.

A long-shot, sure, as it’s been more than 13 years since Andre Hainault made his first appearance for Canada. Yet, the 32-year-old is far from over the hill. Hainault has always been a consistent performer for Canada, beginning with its run to the 2007 Gold Cup semifinal. Achilles and MCL injuries sidelined the defender in 2015 and 2016, eventually getting in the way of adding to his 44 caps. In the midst of a decent season with FC Kaiserslautern, though, Hainault is certainly a well-known and experienced option for a national team short on options in central defence.

Contracted to Dundee United and currently on loan at Queen of South, Fraser Aird has racked up 13 (!) assists and three goals with the two teams this season in the Scottish Championship. Aird is another victim to the new-found depth Canada has on the wings. However, his way back into the fold could be through his versatility. For example, what if Herdman moves to a 3-5-2? With the 24-year-old able to play both sides, Aird possibly offers a more defensive option on the outer edges of the park as a wingback.

If Herdman is looking for players competent in multiple positions, Nik Ledgerwood can’t be far down the depth chart. Cavalry’s 50-capped talisman has already proven capable of playing as a defensive midfielder and right-back with the national side. At 34, age is certainly counting against a return to the national team setup. However, he is a proven versatile option that Herdman could find a spot for when the 40-man and 23-man Gold Cup squad deadlines come around. His experience at right-back – arguably Canada’s weakest position at the moment – raises his stock just that much higher. Ledgerwood is on record stating his eagerness to play for Canada again.

In national team experience, Simeon Jackson is just, just, behind Ledgerwood with 49 senior caps. Jackson is having one of the more productive seasons in recent memory with St. Mirren. The 31-year-old has five goals and 14 starts on a team that’s dead-last in Scotland’s top flight (a recent loss coming by way of a late goal by Liam Millar). Jackson is experienced at the senior level, for sure, and he is able to play across the frontline. If he keeps scoring important goals at a decent level, Herdman could be forced to move him up the depth chart.

Sligo Rovers winger Kris Twardek is one of the few young Canadians not to get a decent look by Herdman in 2018, save for a second-half cameo against New Zealand a year ago. Admittedly, this is bad timing for the two-times-capped 22-year-old, coming up behind the likes of Junior Holiett, Alphonso Davies and Liam Millar at the left wing position. But he is now an established player at Sligo Rovers since joining in July. He featured in the club’s first six matches of the season, even scoring the match-winning goal in a 2-1 win over Finn Harps. Twardek will definitely need to play his way into the squad, but early indications show he’s capable of doing so.

Recent Valour FC pickup Michael Petrasso isn’t too far out of Herdman’s frame of reference having earned his ninth cap in a New Zealand friendly last year. Similar to Aird, a potential path for Petrasso could form if Herdman experiments with the squad. The 23-year-old started at right-back for the national team through 2017, including that year’s Gold Cup, making him a good option there. If Canada adopts a back-three, he could prove to be another more well-rounded wide option to compliment Holiett or Davies on the left. Early indications from Valour training camp show Rob Gale is set to dabble with a 3-5-2 and 3-4-3 this season. If Petrasso is put in as a winger or wide midfielder, and if he’s able to prove himself there, he could find himself back in the fold as a utility piece soon.