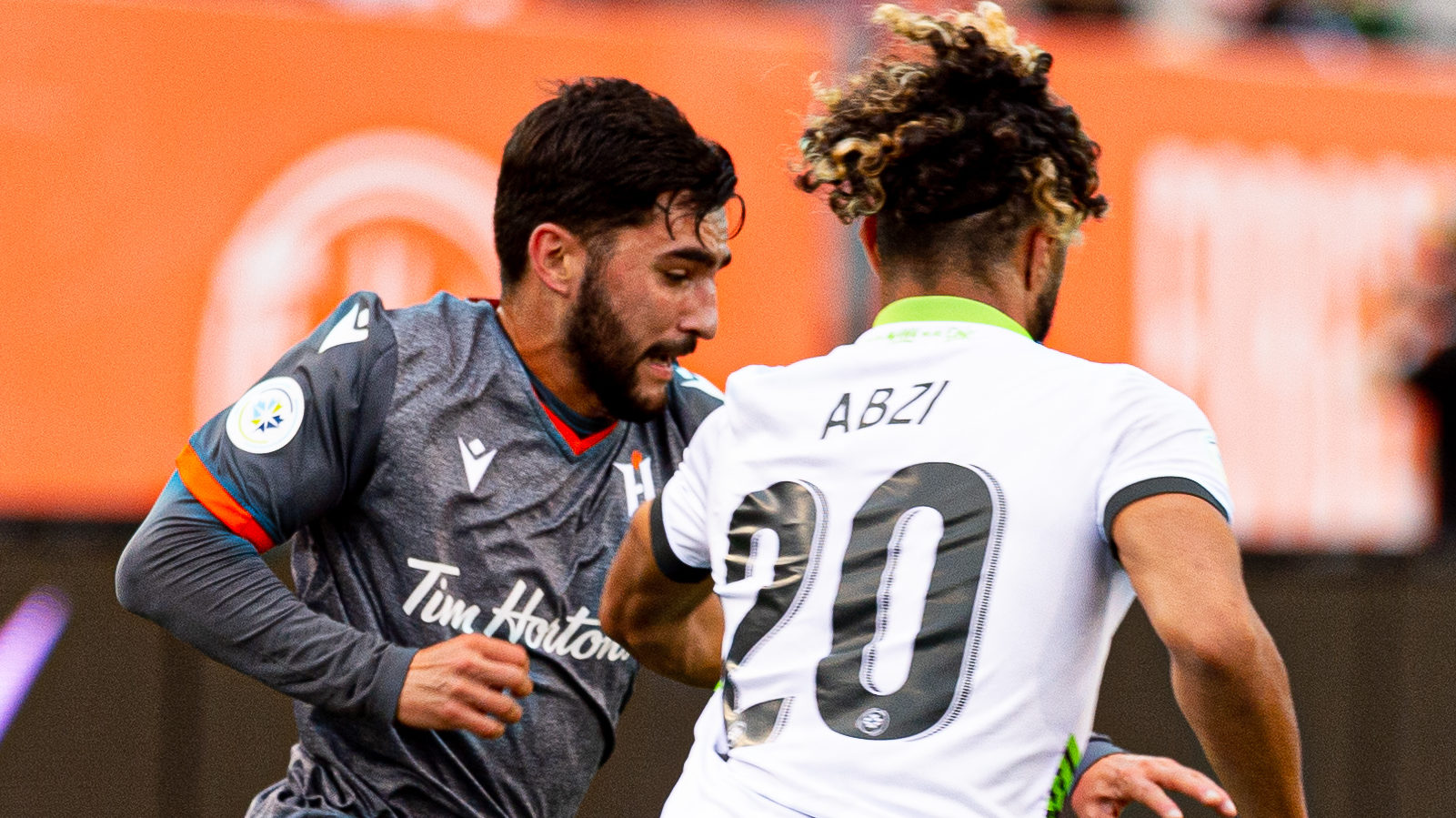 “I think the whole stadium, including all of us, didn’t know that there was a penalty called,” said Forge coach Bobby Smyrniotis of the spot kick that gave York9 one last chance to equalize.

Replay confirmed that Gattas had been dragged down in the box by Marcel Zajac. However, the 1-1 result was not to be on Sunday, as the Chilean pulled his penalty wide of the post and Forge hung onto their 1–0 victory, earned from Tristan Borges’ converted penalty kick at the other end of the pitch.

The win kept Forge atop the Fall season table, and it also clinched the season series with their 905 Derby rivals — the side from Hamilton has taken three of four encounters, with a draw in the CPL’s inaugural match.

York9 boss Jimmy Brennan lamented the result, on an afternoon which saw his side take the upper hand in chances, outshooting Forge 15–9.

Reflecting on Gattas’ miss, he added: “You get a penalty to tie the match up, but you’ve got to hit the target. You’ve got to at least make the keeper work.”

Although Gattas sent his effort to the wrong side of the goalpost, Forge goalkeeper Quillan Roberts felt he could’ve stopped it anyway. He went the right way and stayed low, seemingly covering the spot Gattas had his eye on.

“We’ve done enough video during the week, I kind of had an idea of where he’d like to go,” Roberts told reporters. “I guess intuition just kind of took over, I just went the same way.”

Regardless, the ball’s slow roll past the upright felt like a microcosm of the issues plaguing York9 on Sunday.

It was a frustrating afternoon overall for the Nine Stripes, who in many ways looked the better side despite an inability to find the net. As has been the concern on several occasions this year, their greatest problem was finishing.

“Our movement was good,” Brennan said. “We controlled the game well, but we’re just missing that little bit of quality in the final third.”

Smyrniotis, on the other hand, was unfazed by York9’s advantage in the shot count, instead pointing to the strength of his side’s depth on display in this match.

Echoing his coach’s sentiment was Forge goalscorer Tristan Borges, who noted the confidence his team has in all their depth players.

“You can see the quality that it’s bringing,” he said. “A lot of players are coming in, putting in good minutes, putting in a good shift.

“The vibe is amazing right now.”

It was a very different look for Forge’s backline on Sunday, with Giuliano Frano and Kwame Awuah returning to the fullback spots. The wholesale rotation paid off, though, as they earned a third consecutive clean sheet.

With only a few weeks to go until Forge hosts Cavalry in leg one of the CPL Finals (October 26), Smyrniotis explained that mixing up his lineup is a strategy for keeping his players as fresh as possible, rather than experimenting in the final stretch.

“If you want to tinker, that’s earlier in the year,” he said. “If I still need to figure out who’s doing what on the pitch at this point, maybe I’ve got a problem. It’s more keeping guys fresh, keeping guys moving, and keeping them hungry and ready.”

By slotting a penalty in the 71st minute, Tristan Borges extended his season-long goal tally to 12. In doing so, he moved past Pacific FC’s Terran Campbell for first place on the CPL’s scoring leaderboard.

The two have been close for much of the Fall competition, with Borges’ recent run of form bringing him neck-and-neck with Campbell. Asked if the league’s first golden boot title is an accolade he’s eyeing, Borges admitted that he’d love to claim the title.

“When you’re first or second you’re always looking to try to finish first for the golden boot,” he said on Sunday. “It’s a nice competition to have with Terran, he’s a friend of mine, but kind of like how I always say, as long as the goals are helping my team win, it’s always the biggest thing for me.”

With three games to go, Borges is mindful of balancing his scoring aspirations with trying to stay healthy ahead of Finals 2019 at the end of the month. It’s unlikely that he’s playing at 100 per cent health, but he’s done well staying in form despite injuries all year.

“It’s a little rough,” he said, laughing. “I think always being an athlete, you’ve got to take care of your body.”

He added: “At the end of the day, you can’t really complain about it. If you can play in many games, I think that’s an exciting thing. Every player always wants to play games.”