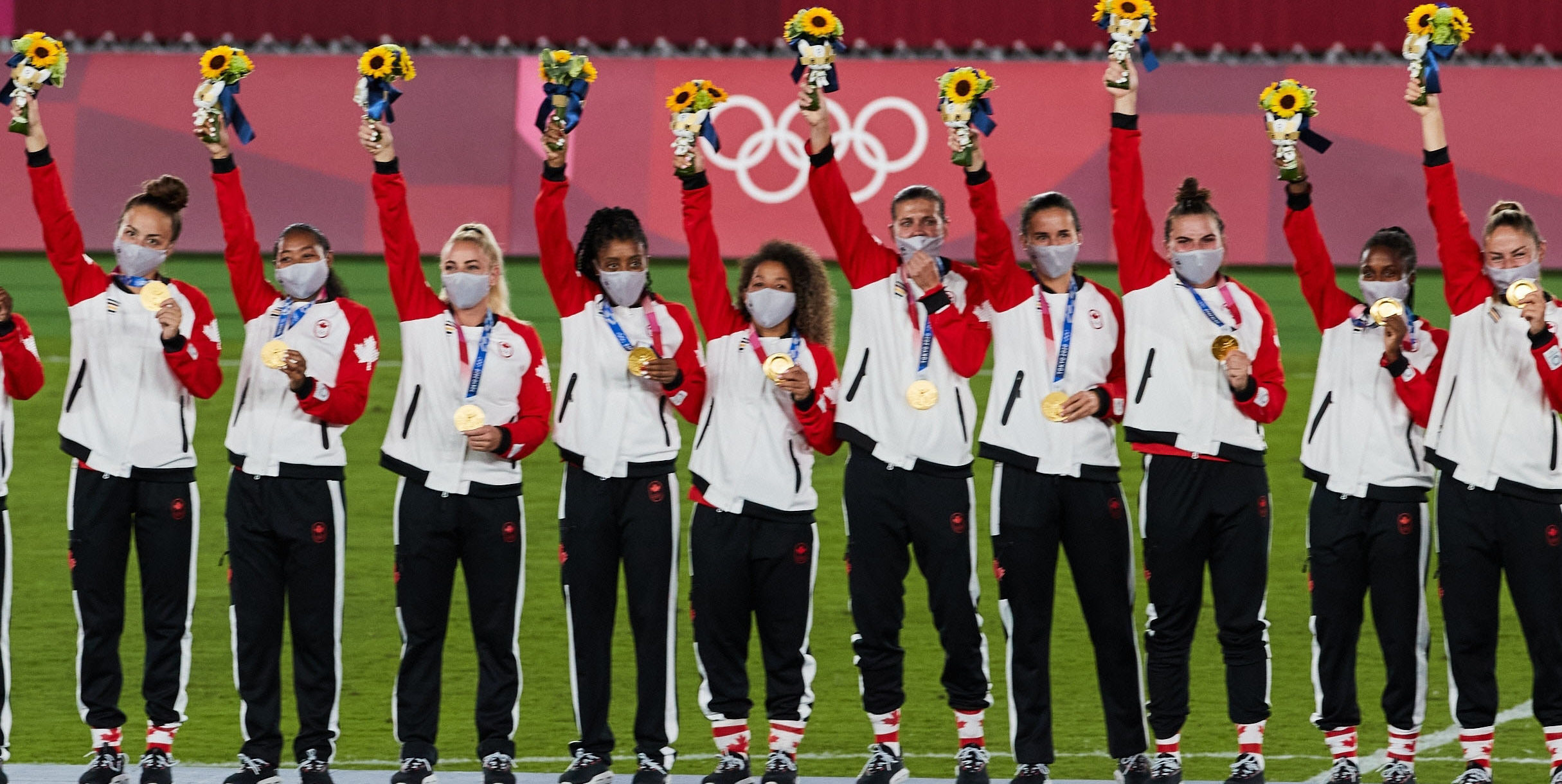 The Tokyo 2020 Olympic Games came to a close on Sunday, and Canada showed up in record-breaking fashion. With seven gold medals, six silvers, and eleven bronzes, it was Canada’s best showing at a non-boycotted Summer Olympics.

A lot of eyes ahead of the Games were on the Women’s Football tournament. One of the major storylines around the event was whether or not the United States would complete the World Cup and Olympic gold double, but north of the border there was a different theme.

Overlooked by many, Canada insisted on “changing the colour of the medal.” It’s a phrase Canada head coach Bev Priestman and the players used regularly. After bronze medals at London 2012 and Rio 2016, this “golden generation” of Canadian soccer players was missing just that — a gold medal at a major global tournament.

With an incredible two-and-a-half week journey ending on the left foot of Julia Grosso, here’s how Canada became Olympic Women’s Football champions on a famous night in Yokohama.

Drawn against the hosts Japan, Great Britain, and Chile, Canada was in for a tough group stage. After finishing as one of the best third-placed teams at the 2016 Olympics, they wanted to finish higher up and not leave their fate in the hands of others.

They began their tournament a few days before the Tokyo 2020 opening ceremony, with a match against Japan at Sapporo Dome on the 21st of July. Playing in a milestone 300th game for Canada, Christine Sinclair wasted no time at all, giving Canada the lead just over five minutes into the game. Stephanie Labbé gave up, but then saved, a penalty in the second half (this became a theme throughout this tournament), hurting herself in the process, but keeping Canada up 1-0. Kailen Sheridan came on to replace her a few minutes later, in to see out the rest of the match as the clock was slowly ticking toward the final whistle. Canada fended off pressure from their opponents, but in the 84th minute, Mana Iwabuchi beat Sheridan with a shot at the near post to even the score. The two would share the points in the end, but Canada showed promising signs against a strong opponent.

Next up, Chile in match number two. Against one of the best goalkeepers in the world, Olympique Lyonnais’ Christiane Endler, Canada found the back of the net twice — which turned out to be the most they’d score in a single match in Japan. After missing a first-half penalty, Janine Beckie bounced back, giving Canada the lead 38 minutes in. Beckie collected the ball after Endler punched it away, taking a touch to her right and firing the ball into the back of the net. Moments after halftime she’d score again, running onto a pass through the middle from Nichelle Prince, dribbling around the goalkeeper, and calmly sliding the ball into the open net. Karen Araya brought Chile back within one by beating Kailen Sheridan from the penalty spot, but they were unable to find a second, and Beckie’s brace had Canada on the verge of a spot in the knockout rounds.

Knowing that a point would be enough to confirm their quarterfinal berth, Canada took on Group E-leading Great Britain in their third and final. Canada rested several key players — including taking Christine Sinclair, Desiree Scott, and Allysha Chapman out of the matchday squad entirely — but were able to welcome Stephanie Labbé back into the lineup. After an uneventful first half, Adriana Leon gave Canada the lead, placing a shot into the top right corner after a dangerous low cross into the box from Ashley Lawrence made its way through to her. As was the case against Japan, a late shot from Caroline Weir took a massive deflection off of Nichelle Prince (who was credited with an own goal in the end), leaving Labbé no chance to keep it out.

With five points through three matches, Canada were off to the quarterfinal as the second-placed team in the group, finishing two points behind Great Britain, and one ahead of Japan, who advanced as the best third-placed side.

Quarterfinal — Labbé to the rescue as Canada keep on rolling

It’s always a treat when two of the greatest international footballers ever go head-to-head, and with a chance to play for an Olympic medal on the line, it doesn’t get much better than Canada vs Brazil — and Christine Sinclair vs Marta. Both chasing an elusive first Olympic gold — Marta had two silvers and Sinclair two bronzes entering Tokyo 2020 — and with almost 500 international appearances between them, one of their tournaments had to come to an end at Miyagi Stadium.

After resting some players against Great Britain, Canada were back to full strength against Brazil — as Christine Sinclair, Nichelle Prince, Jessie Fleming, Desiree Scott, and Allysha Chapman returned to the starting lineup.

Both sides had chances to score throughout the 90 minutes, and into 30 minutes of extra time, but neither was able to find the winning goal. Canada came closest from a set piece, as Vanessa Gilles’ header came crashing back off the crossbar in the second half, while Debinha was unable to beat Stephanie Labbé on a breakaway.

Penalties would be needed to decide the winner. After Sinclair failed to find the back of the net with her first shot, and Marta putting hers in the back of the net, the pressure was on Canada after one round. They traded goals as Brazil scored their first three, and Jessie Fleming and Ashley Lawrence kept Canada in it, but they remained down a goal. Adriana Leon converted Canada’s fourth, while Labbé saved Brazil’s fourth effort from Andressa, tying it up at 3-3 after four shots each. Vanessa Gilles gave Canada the lead before Labbé stopped a second-consecutive shot, and Canada were off to the semifinals.

Labbé had made several saves throughout the match, but the two in the penalty shootout against Brazil gave her, and Canada, a huge morale boost going into the semifinal, and a battle with a familiar foe in Kashima.

Semifinal — An old rivalry renewed, but with a very different outcome

Victory in the semifinal would give Canada a shot at winning Olympic gold, or at the very least guarantee that they’d walk away with an upgraded medal from the ones they picked up in London and Rio.

The problem? They were up against the United States — back-t0-back Women’s World Cup winners, and a team that they hadn’t won against since March 2001 — before Jordyn Huitema, the youngest member of the roster, was born.

But to be the best, you have to beat the best, and that’s exactly what Canada did.

It was a defensive masterclass from Canada for the most part, with Vanessa Gilles in particular standing out against an elite front three of Tobin Heath, Alex Morgan and Lynn Williams — and then another world-class trio of Megan Rapinoe, Carli Lloyd and Christen Press off the bench in the second half as the Americans tried to use their deep attack to keep the pressure on the Canadian backline.

After an hour of scoreless action, both sides were yet to falter, and it seemed as though the first error would prove to be the fatal one.

With just over 15 minutes left in regulation, Tierna Davidson fouled Deanne Rose in the penalty area, and after a check with the VAR, Canada were awarded a penalty. One of Canada’s best players on the night, it would be Jessie Fleming to step up and take it, and she beat a diving Adrianna Franch to give Canada a 1-0 lead — following it up with an epic kneeslide in front of her bench. They had one foot in the door to an Olympic final, but 15 more minutes still to fight through.

The United States upped the tempo again, trying everything they could to send the match to extra time, but Canada held on to book their ticket to the final a few days later.

It was redemption for the intense and controversial semifinal between the two sides at London 2012, but more importantly it was proof that Canada had what it takes to win against the best teams in the world, which had been a question mark heading into the tournament.

Final — Canada change the colour of the medal

Last, but certainly not least, the final. The biggest game in Canadian soccer history, many suggested before the match.

After the win over the United States in the semifinal, Canada took on Sweden — runners up from the previous Olympics in Rio de Janeiro in 2016, and the team that knocked them out of the 2019 Women’s World Cup. Canada went with the exact same starting lineup for the third match in a row, as Bev Priestman stuck with the players who got them there.

Stina Blackstenius gave Sweden the lead in the 34th minute, receiving a cross and putting the ball through the legs of Vanessa Gilles. Stephanie Labbé was unable to dive across in time to stop it, and Sweden came out of the first half with a deserved 1-0 advantage. Canada got back into the match in the 68th minute, again from a Jessie Fleming spot kick, and immediately ramped up the pressure, but after another 50 goalless minutes, penalties were needed to decide who would be the Olympic champion.

After Kosovare Asllani missed Sweden’s first penalty, Fleming stepped up to the spot and again beat Swedish goalkeeper Hedvig Lindahl. Sweden scored two of their next three, while Canada missed shots two through four, meaning Sweden were a goal away from walking away with the gold medal, but Labbé had other ideas. Dancing and smiling before Sweden’s fifth penalty, the Canadian shotstopper watched Sweden captain Caroline Seger’s penalty sail over the bar, and then had a front-row seat as Deanne Rose placed her equalizing penalty into the top right corner.

In sudden death, the “National Minister of Defence”, as Labbé has been christened online, stopped Jonna Andersson’s effort, handing Julia Grosso the opportunity to make herself Canada’s hero. The 20-year-old midfielder from Vancouver stepped up and fired her shot at Lindahl, who despite getting a touch on the ball, couldn’t keep it out of the net, and Grosso turned and wheeled away in celebration.

Arguably the greatest international footballer of all time, Christine Sinclair, finally had her international honour, as did the rest of the group of 21 longtime national team members, and young up-and-comers, as two generations of elite talent merged as one to deliver for Canada on the world stage. In her first major international tournament as head coach, Bev Priestman had lived up to her word and changed the colour of the medal, adding to her 2016 bronze as an assistant to John Herdman.

It was finally Canada’s turn to stand atop the podium, and have O Canada echo around International Stadium Yokohama for the world to see and hear — a moment that will change the sport in this country forever.