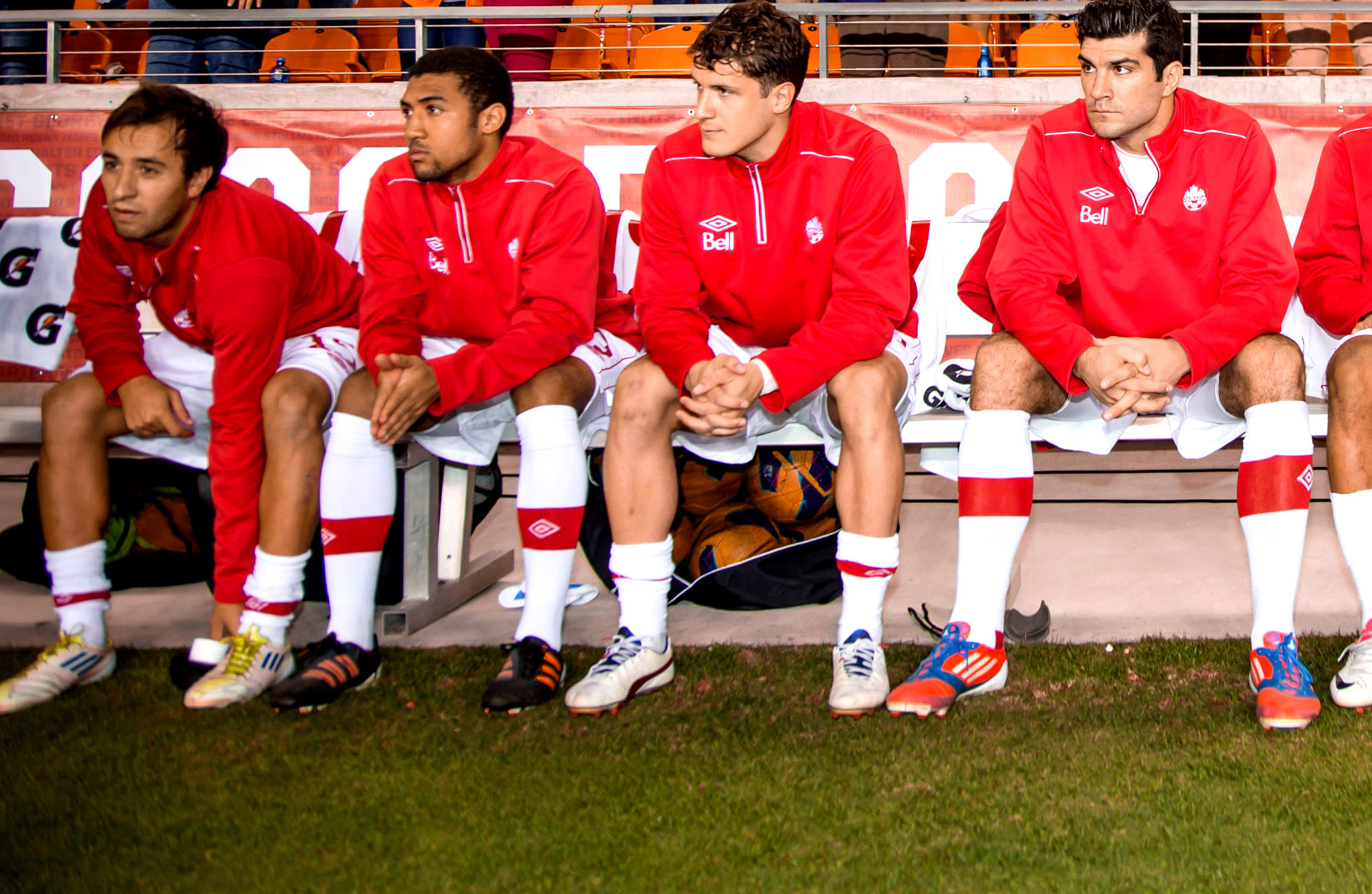 Mason Trafford (3rd from L) was called into the Canadian national team in 2013. (Canada Soccer)
Trafford dedicated to building Cavalry FC, both on and off the field
2019-03-01
by
Steven Sandor, Contributor
News

Eleven years ago, the Vancouver Whitecaps were embarking on what would be a championship season in what was then known as USL-1.

Martin Nash was a veteran midfielder on the team. And, that season, a Canadian rookie named Mason Trafford joined the team.

“It was like having an older coach playing beside him,” Nash recalled. “He was a very confident player, willing to learn.”

He wasn’t the kind of player who wanted to rush things, according to Nash — Trafford understood that he was on a learning curve and that he wasn’t going to figure everything out in a matter of weeks.

Now, in 2019, Nash and Trafford will be working together again. Nash is the assistant coach at Cavalry FC, and Trafford is a versatile player with years of European and North American experience who can play in the middle of the park, as a centre back or out on the wing.

“He is the right fit for us,” said Nash. “He is a quality human being and a quality player.”

And the fact that he’s left footed, well that’s a bonus. He can play as a centre back or as a fullback, so he offers a lot of flexibility to his team.

Nash was an assistant with the Ottawa Fury when Trafford joined the NASL side. The pair were both part of the team that went to the NASL final in 2015. That year, Trafford primarily played as a left back. But, he was part of a mass exodus at the end of the campaign, and has spent the last three seasons with Miami FC — two of them in the NASL and one in the semipro NPSL.

With Trafford looking for a new team, and fielding offers in USL and Europe, he had several calls with Nash.

“He said to me that what was happening in Calgary was really impressive, he had so many positive things to say about the team,” said Trafford. Nash told Trafford that Cavalry had great facilities, were building on a great nucleus of the Foothills team that won PDL in 2018, and the new soccer stadium being built within the greens of Spruce Meadows would create an environment that was really unique.

“We spoke quite a bit,” said Trafford. “And it’s funny how life works. He has been my teammate, coach and friend for, wow, 11-plus years now. That sounds really funny when I say that out loud! We used to live five minutes from each other in North Vancouver. Now we’re here in Calgary.”

But Trafford will be more than a player with Cavalry. As part of the deal, he’s working at Spruce Meadows, helping sell tickets and sponsorships and building the soccer culture. He’s working for the team both on and off the field. The double-pronged offer to be both a player and administrator was too good for Trafford to turn down.

“I’m 32, now,” he said. “I’ve started a few businesses over the years, and while I still really want to play I know I have to develop another side of myself for when it’s time to hang ‘em up — though I hope that won’t happen anytime soon.”

When Trafford went to Miami in 2016, he signed a three-year deal. Miami FC, Trafford said, honoured most of the contracts even when the club knew that the NASL wasn’t going to play a season in 2018. The team moved to NPSL and Trafford remained. Most importantly, his wife, Claudia, was expecting their first child. They had a birth plan and their doctors in Miami. Family came first — and their daughter, Luna, was born in Florida. Leaving in 2018 would have meant breaking up the family for at least a few months, or uprooting his wife while she was in the late stages of her pregnancy.

“Miami still continued to do things the right way,” he said.

Trafford is now a short flight away from Vancouver, and he also has aunts, uncles and cousins in Calgary. And he’s excited to build this league — both on and off the field.

“It’s very special, with the World Cup coming in 2026,” he said. “We need to put a product on the field. We’re under the microscope on the world stage.”