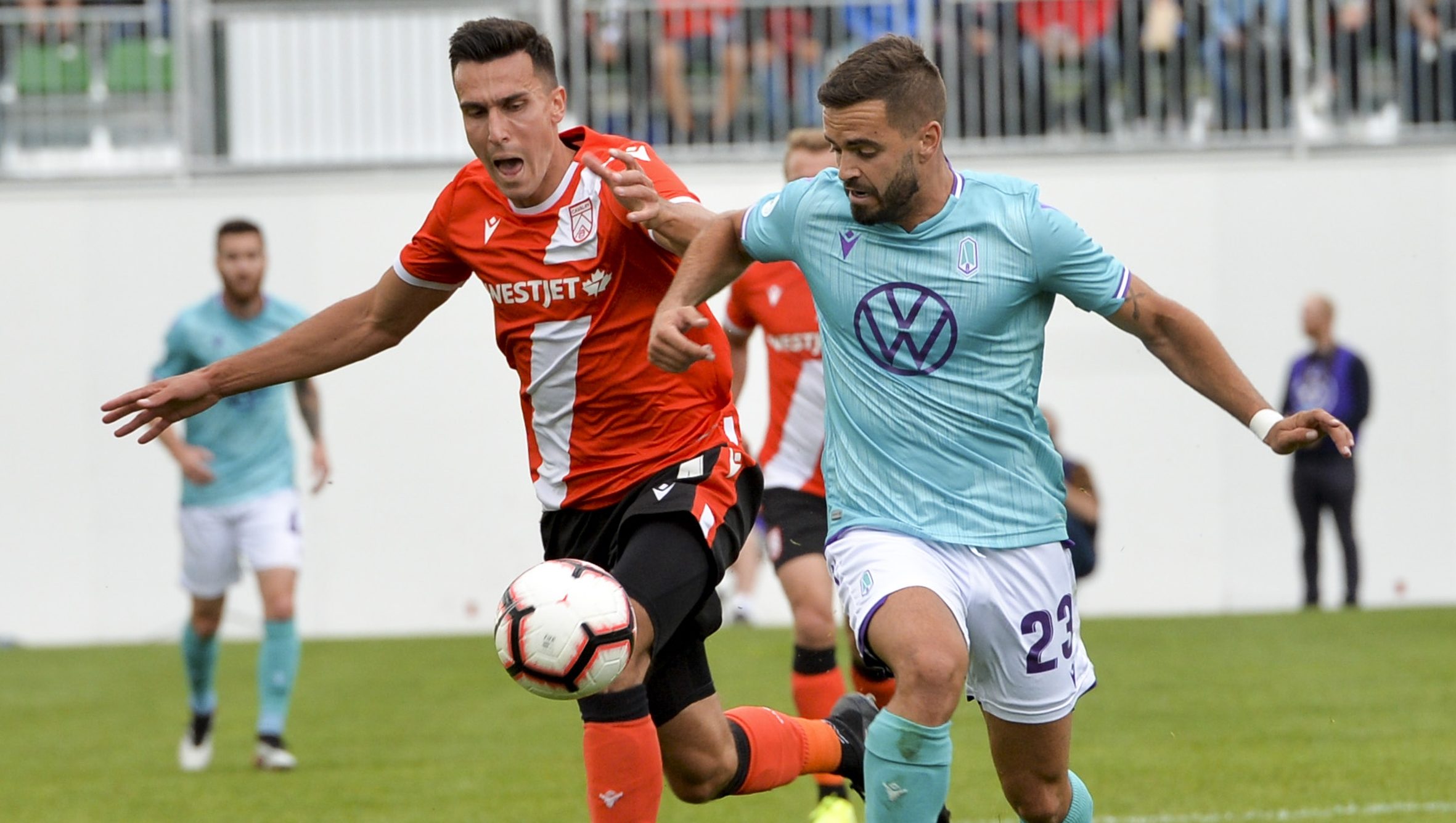 Cavalry FC's Dominick Zator battles for the ball with Pacific FC's Victor Blasco. (Mike Sturk/CPL).
Víctor Blasco bullish on Pacific’s chances in 2020: ‘We have what we need now’
2020-05-07
by
John Molinaro, Director of Content (@JohnMolinaro)
News

For Víctor Blasco, the shutdown of the Canadian Premier League due to the COVID-19 pandemic couldn’t have come at a worse time.

Pacific FC was “flying through” their pre-season training camp, according to the Spanish midfielder, and he and his teammates were ready to take the league by storm when the decision came to halt all training sessions and delay the start of the regular season scheduled for April 11.

After a disappointing 2019 CPL campaign in which Pacific finished a distant fifth in the overall standings (and just three points out of last place), and a busy off-season that saw the club re-tool, Blasco was confident the “new-look” Tridents were going to storm out of the gate in 2020.

Now, that’s on hold. As far as sending a strong message to the other seven teams that Pacific was going to contend with for the North Star Shield, that will have to wait, too.

Still, Blasco remains bullish on Pacific’s chances once the CPL season eventually kicks off, and he points to the fact that their new coach has invigorated the players, and the team has added “some really good attacking pieces” this off-season.

“We have what we need now, what we were missing last year. I also think that a lot of the guys learned from the mistakes that we made last year. We’ve improved our mindset, our fitness and our professionalism. We’ll see where we stand when the league begins, but I really do believe we have a strong team,” Blasco told CanPL.ca.

Pacific’s roster has undergone a fair bit of turnover since the 2019 CPL season ended. Of the 16 players currently signed to contracts, only 10 are returnees from last year.

But the club pulled off one of the biggest free-agent signings of the winter when it landed Marco Bustos, the 24-year-old attacking midfielder who led Valour FC with seven goals last season. The addition of Bustos and Mexican striker Alejandro Díaz, who used to play for Club América in Mexico’s top flight, should help to bolster a Pacific attack that ranked fourth in the league last year with 35 goals.

Blasco and Bustos previously played together at Whitecaps FC 2, and the Spaniard believes his new teammate will make Pacific more dangerous in the final third of the pitch due to the Winnipeg native’s ability to create scoring chances.

“I played with Marco with the Whitecaps, and the thing I remember is that we used to play really good together. He’s a very technical player, he knows the game, he works hard, and he has a very good mindset. He will help us big time because last year were sometimes a bit unlucky up top. I got injured for a few months and we were missing this one piece to create a bit more and link up with the forwards,” offered Blasco, who had six goals and three assists in 26 CPL appearances in 2019.

Aside from the changes on the pitch, there’s also new man in charge at Pacific — someone with whom Blasco is quite familiar. Pa-Modou Kah was hired as the club’s new coach in January, and he has already helped to change the culture at the club with the way he holds his players accountable.

Blasco first caught a glimpse of Kah’s strong character traits several years ago when as a member of Whitecaps FC 2 he was invited to participate in the MLS side’s pre-season training camp. Kah was playing for the Whitecaps at the time, and had no issue with calling out teammates, Blasco included.

“At that time, I was a very different person, much younger, and I remember him pushing me really hard, and telling me everything that wasn’t good straight to my face. At that time, I didn’t want to listen, and I blew him off and thought, ‘Ah, whatever, who’s this guy?’ But he’s someone I respect a lot now. He believes in me and he is one the reason why I stayed at Pacific, and I’m excited to work for him. I believe he’s going to make us better players and better people,” Blasco said.

He later added: “Kah is a guy who doesn’t care about anything in that if he has to tell you something and it isn’t pretty, he’ll tell you straight up. You have to respect that.”