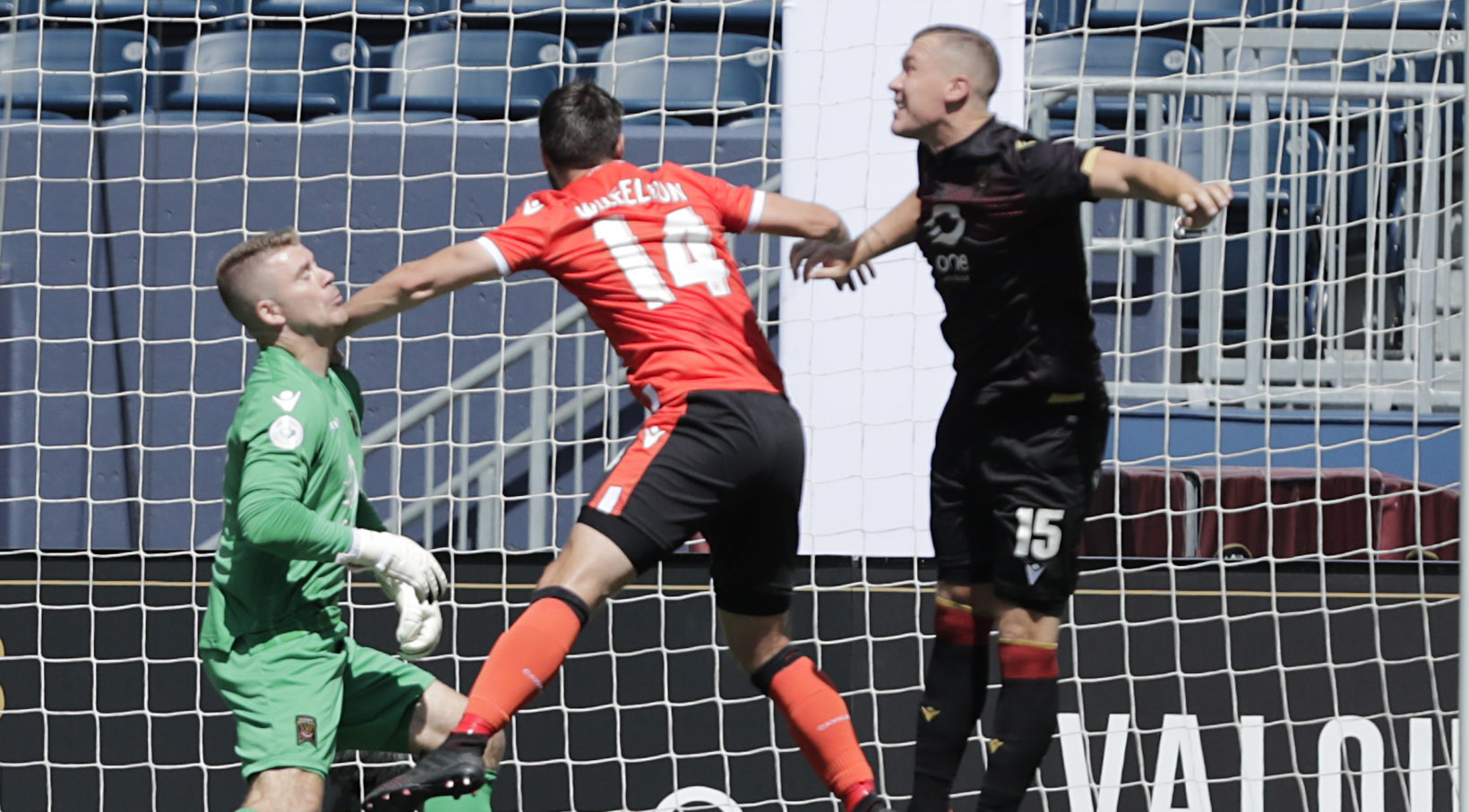 WINNIPEG – One point is not three points. It’s actually two less points. But Valour FC’s 1-1 draw with Cavalry FC on a hot afternoon in Winnipeg ended with an energy that would convince anyone that the hosts picked up a victory.

The whole mood inside IG Field changed in a moment. Down a goal in stoppage time, with Cavalry looking to slow the pace of play to the final whistle, Glenn Muenkat was taken down in the box. Marco Bustos calmly converted the penalty to salvage a late result.

“I just felt comfortable,” Bustos said of the moment

The penalty marked a run of play where Valour scrambled for an equalizer. Trying to cancel out a breakdown late in the first half, where a perfectly laid ball by Sergio Camargo hit Oliver Minatel in stride and the Brazilian calmly finished it off to give Cavalry a 1-0 lead into half time.

“The goal changed the complexion of everything, changed the half time team talk, we didn’t feel threatened but they got a gift from us,” Valour FC coach Rob Gale said post-match.

So, the hosts pushed forward in the second half. Dylan Sacramento hit the post with a shot, Martin Arguinarena’s free kick was stopped by Niko Giantsopoulos and there were a few other close calls in the Cavalry half.

As Bustos’ left footed kick hit the back of the net, a feeling of relief swirled around the stadium, and you could see that relief on the faces of the players as they walked off the field. Sure, Valour would have preferred a victory, but they were seconds away from getting nothing at all.

“The points are good but I think there was a chance for us to win the game,” said midfielder Dylan Sacramento. ” (But) it’s definitely a spring for us to keep moving forward and there’s so much for us to improve on and keep getting better.”

The match was also a long awaited return to playing in front of the home crowd. Valour was just two games into the new Canadian Premier League Fall season. They drew 0-0 in Edmonton before a 3-1 loss on the road to Forge FC. Bustos and co. knew they wanted the 5,111 people in attendance to leave with a reason to believe that the club is turning a corner.

“We haven’t got a point here at home for a while, the fans deserve it, we deserve it,” midfielder Marco Bustos said post-match. “It’s something we need to bring more here, more goals, hopefully keep the support coming out.”

Though this writer is scoring it a moral victory for Valour FC, the late draw was in no way a loss for Cavalry FC. The club was playing it’s third match in six days and made seven changes to the starting lineup that beat the Vancouver Whitecaps on Wednesday.

“We picked up results from three matches in one week, two of them on the road.” Cavalry head coach Tommy Wheeldon Jr. said.

A well deserved break awaits the Calgary side. After playing seven matches in the month of July, they will take nearly two weeks off before returning to action.

And what an important match it will be. Cavalry will visit Stade Saputo on Aug. 7 to take on the Montreal Impact in the semifinals of the Canadian Championship. With Saturday’s draw, the Cavs are on a run of six matches without a loss.

Valour is still looking for a first victory since June 2. Their first chance to do that comes on Wednesday, July 31st against Pacific FC.