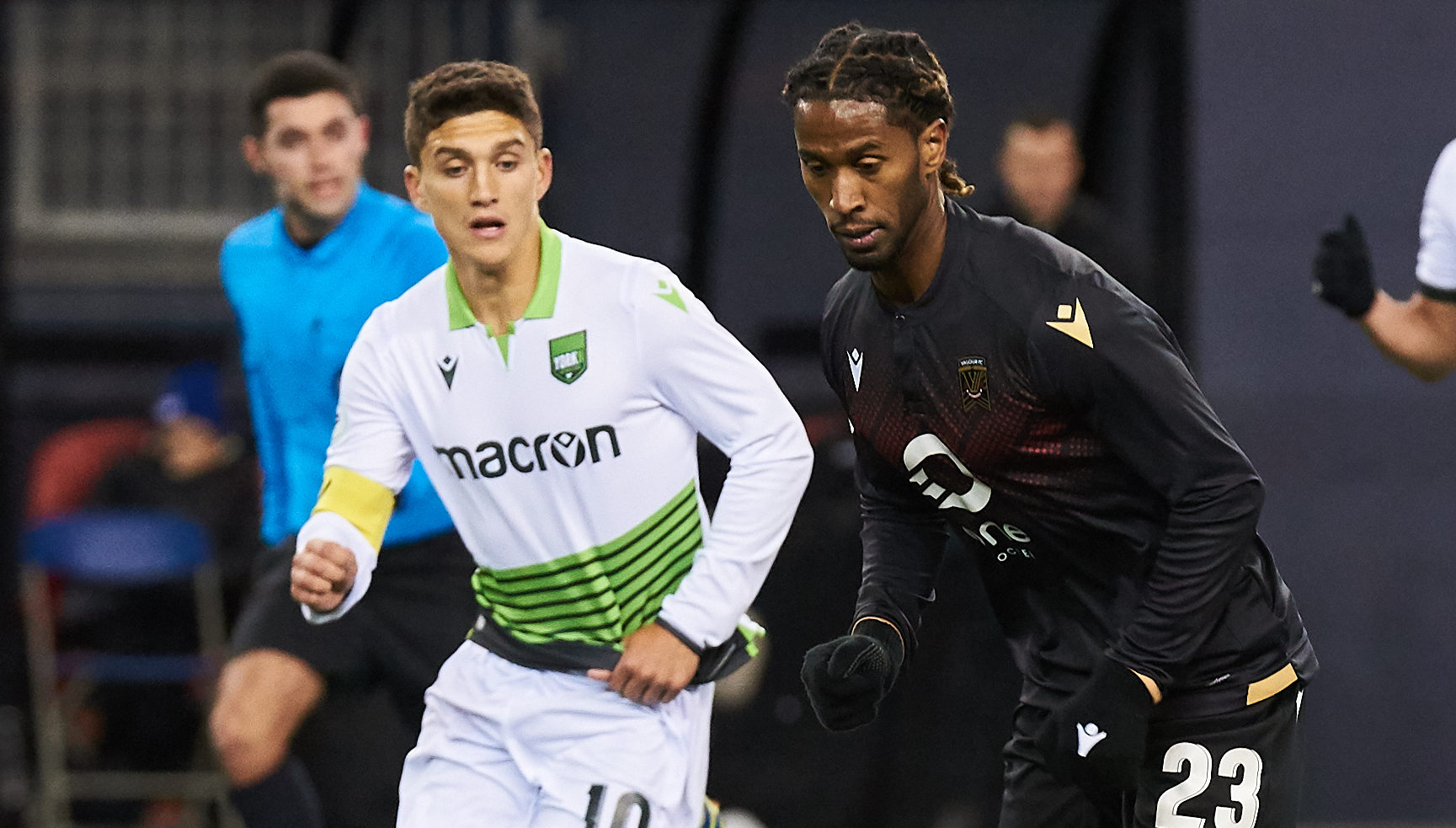 Valour's Ali Musse takes on York9's Manny Aparicio at IG Field. (Photo: Valour FC).
‘We had to be patient’: York9 explode for 4 in 2nd half to beat Valour
2019-10-16
by
Ryan Brandt, CanPL.ca contributor
News

Ryan Telfer led the way with a pair of second half goals as the Nine Stripes earned a 4-0 away victory over Valour FC on a chilly October evening in Winnipeg.

Telfer’s left footed blast in the 48th minute to beat Tyson Farago set the tone for the explosion of offense that eventually followed. Though it certainly took a while after a less than threatening first half from both sides.

“They left a lot of space when I was attacking and it was a matter of us getting the ball forward quicker,” Telfer said on the OneSoccer post-match show. “In the first half we lacked those final third passes and it was all about connecting and making something of it.

Joseph Di Chiara converted from the penalty spot, while Simon Adjei added to compliment the brace from man of the match winner Telfer. In the end, patience paid off for the visitors.

“We just knew we had to be patient. Eventually we were going to open them up and we did in the second half,” Brennen said. “We felt like we were in control, we didn’t feel that they were going to hurt us.”

This is a second straight 4-0 victory for Y9, following a home result against Forge FC less than a week ago. Eight goals in two matches is remarkable at any level; though perhaps it’s the back-to-back clean sheets that the York coach is most impressed by.

“Defensively, we work a lot on our shape and our balance and the guys are all on board defensively and offensively and they’re clicking now, which is great,” Brennan offered.

While York9 laments the good of the 90 minutes in Winnipeg, Valour FC closed out their home schedule by feeling a bit hard done by. The Di Chiara penalty marker was an eventual dagger on a comeback attempt, and Valour head coach Rob Gale was adamant that defender Skylar Thomas did not make enough contact with York’s Kyle Porter to warrant a penalty.

“That’s not a penalty. It was an even game, and I think it got killed as a contest,” Gale said after the match.

In the end the game will go down as another footnote on the well declared roller coaster of season one of the Canadian Premier League for Valour FC. The club came in on the heels of a well earned 3-1 victory over Edmonton. Valour went 0/7 on opportunities to string consecutive victories together.

Injuries have certainly played their part in the lack of consistency, a point once again brought up in the loss to York9. Gale listed off the players unable to play with ailments, adding that Jordan Murrell soldiered through a knock and Raphael Garcia barely returned from injury to feature in the match.

And those injured players have been key building blocks when you look back to early in the season. Veterans Josip Golubar and Martin Arguinarena were both lost to season ending injuries, Golubar made only three appearances. Louis Beland-Goyette’s season likely ended against this very York9 team a month ago.

Add on time missed by the likes of Musse, Petrasso, Mitter, Murrell and Sacramento … it’s no wonder 25 different players have seen the pitch for Valour. Heck, at one point this season goalkeeper Tyson Farago played through a broken finger as fellow ‘keeper Mathias Janssens worked his way back to fitness.

Gale didn’t want to use that as an excuse, but it’s likely the biggest factor when he reflects on what has gone wrong this season.

“We’ve not been able to put out a settled side, I think one game we managed to play the same starting 11 back to back,” Gale said when describing the impact injuries have had on the season. “That’s a challenge in most squads (injuries), but by far we have had the most.”

Too many injuries and not enough consistency; seems like they go together?

“Having to rotate through players, it’s difficult for them to keep that game tempo for 90 mins because when you’ve been on the sidelines nothing replicates those games,” Gale said. “We’ve been unfortunate.”

But through all the adversity, it still stung for the hometown coach to end the schedule in Winnipeg by losing, and by four goals. Valour also had a losing record at IG-Field, going 4-8-2 between the spring and fall seasons.