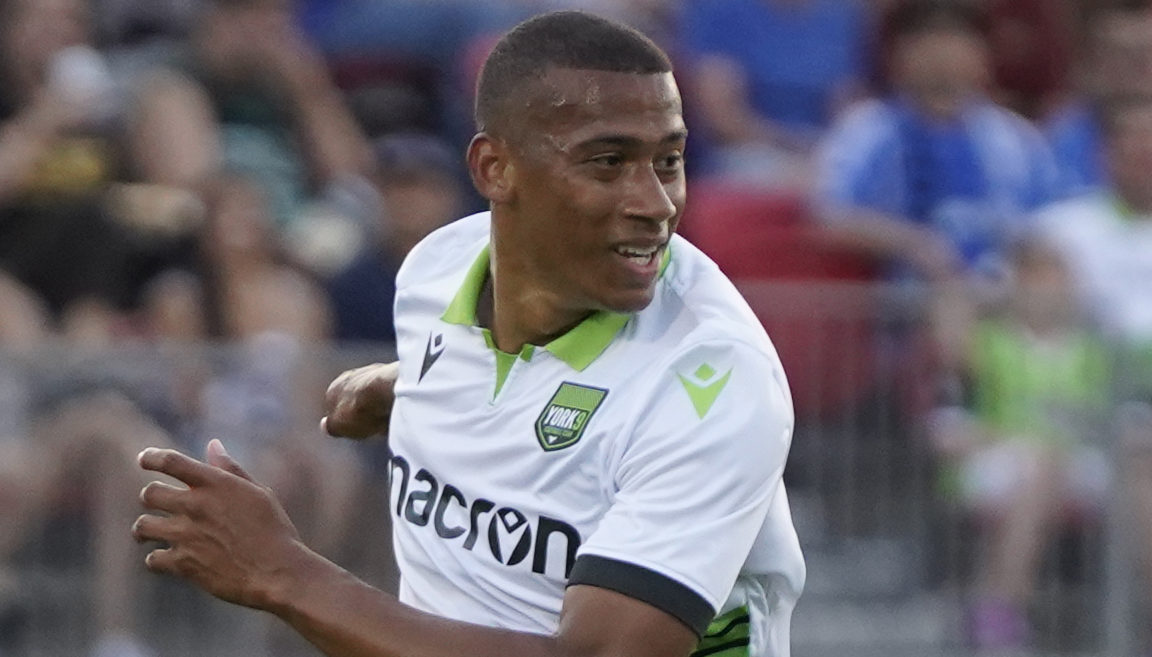 The 25-year-old attacker scored the first goal of the inaugural Canadian Premier League season on April 27 at Tim Hortons Field in Hamilton. He bagged York9’s first goal at home as well, in the Canadian Championship against AS Blainville a month later, and there was his cracker against the Montreal Impact, the first goal scored by a CPL player against an MLS side.

Then he made a little more history this past international break. On Sept. 9, Telfer became the first CPL player to score an international goal when he tucked one in for Trinidad and Tobago in a 2-2 draw with Martinique at home in the Concacaf Nations League. (Ex-Forge FC loanee Emery Welshman scored for Guyana, but that was before the CPL season kicked off.)

Telfer is back with Y9 now, but he’s still buzzing from making his international debut for Trinidad.

“It was one heck of an experience,” Telfer told CanPL.ca. “Different in general from club football, the international level is more competitive, you felt that in both games.

“The intensity, what’s at stake for the fans, points towards qualifying for the Hex.”

Telfer made his debut for T&T a few days earlier away to Martinique, a 1-1 draw between the two nations, after only finding out he’d be suiting up the day of the match, having rushed to get his passport details sorted and join the squad. It was in the home fixture when the reality really sunk in.

“Getting to play your first game at the country you’re representing, being able to play in front of family and friends, who you grew up with for the longest while, was a truly honourable experience,” Telfer said. “Very humbling indeed to understand where you come from, the same streets you come from, being able to put the colours on your back and represent the country in total.

“I really enjoyed my time, being able to play in front of your home crowd. For (them) to be behind your back, supporting you every time you touch that ball, gave me so much energy.”

Before he could relish that moment, he was faced with a choice: Trinidad and Tobago or Canada? Telfer was born in Mississauga, Ont., but was raised in Trinidad, so when he received a call-up from T&T manager Dennis Lawrence for the country’s first two Nations League matches, Telfer had to decide to which country he would pledge his international allegiance. In the end, he accepted the invite from the Soca Warriors

His decision came down to two factors: a chance and the challenge.

“I was really looking for that one chance to express myself, to prove what I could bring to the table,” Telfer explained. “That was a chance Trinidad was willing to give.

“I really liked the idea of a challenge.”

He added: “Would I be able to help Trinidad and Tobago football to move further, help them to qualify for a Gold Cup, even qualify for the Hex? That’s something that I want to take seriously. I don’t really like being on the back burner, being able to see things happen. I’m one of those guys that wants to make a difference; that has to make a difference.

“That’s what my time at York9 this year has brought me, and what Toronto FC sent me here (on loan) for: being able to step up to the plate and prove yourself that you can change things for yourself. That’s what I really look forward to.”

Though mentioned by John Herdman as someone they were tracking heading into the latest Canadian national team camp, Telfer said there was no contact between himself and the coach.

“Just before I was called up to Trinidad, I was on the short list before Herdman picked his final squad, but not anything from him personally leading up to this,” Telfer said. “It made my choice pretty much made up knowing that. If I had the chance, maybe I would have (taken) that path.

“I was just looking for the one chance to showcase my skills and see what I could bring to the table. It came to me as who was willing to give me that platform first, I was going to jump up at it and it turned out this way.

“There was also a gut-feeling for me to lean towards this side. Honestly, I’m happy with the situation.”

Still, Telfer sees a bright future ahead for Canada.

“Everyone knows the talent Canada has right now,” Telfer offered. “Players playing in Europe: Alphonso Davies, (Junior) Hoilett for a few to name. Even guys getting called up from the CPL, like (Marco) Carducci. You’re starting to see all the Canadian talent flourish.”

He continued: “It’s really coming together under Herdman. He has a very good reputation and what he is doing so far you could see in the results.

“I honestly believe (Canada) will be able to do great things in the future.”

And he sees a parallel between Canada and Trinidad and Tobago.

“Canada took a step back from the international game for a long time, things haven’t been so great, but now the talent is starting to come back. Time was there weren’t a bunch of players on your radar,” Telfer said.

“Being able to play with these guys on the field, you understand these guys have talent, we have a pretty good shot at this.”

So, what if Trinidad ever plays Canada in the future and he has to line up against the Reds?

“That would be a pretty mouth-watering game,” Tefer said. “If that ever happens, I’ll really look forward to marking that one on my calendar.”

Look for Part 2 of James Grossi’s story on York9 FC’s Ryan Telfer and his experience playing for Trinidad and Tobago in the coming days at CanPL.ca