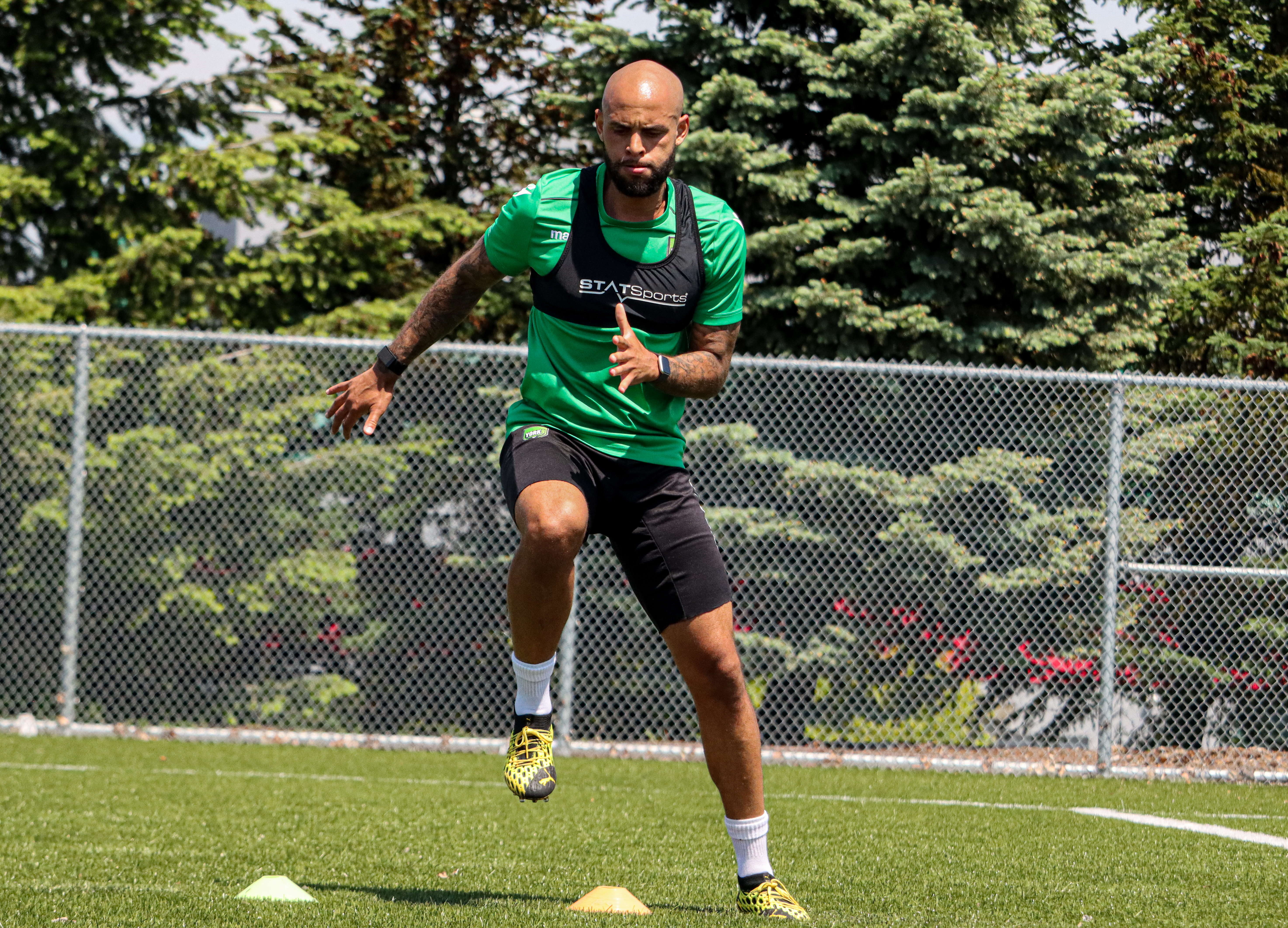 York9 FC forward Kyle Porter was so used to being racially profiled when he was younger that he became numb to it.

Not anymore, though. Today, the 30-year-old native of Toronto is taking every opportunity he can to speak out against racism and lend his support to the Black Lives Matter movement.

During a first-round match at The Island Games between Cavalry FC and Atlético Ottawa last month, every CPL player and all eight coaches, as well as league staff members, came together in a show of support for people of colour, racial equality and a variety of other social justice issues.

The players from the other six teams stood locked hand-in-hand on the far touchline, and all CPL players wore Black Lives Matter shirts and took a knee during the playing of the Canadian national anthem. That was followed by a moment of silence from every CPL player.

A second moment of silence came at the 8:46 mark of the game when play officially stopped to honour George Floyd, the Minnesota man who was killed in June when a police officer held his neck to the ground for eight minutes and 46 seconds.

CanPL.ca recently chatted with Porter about the players coming together on that day in a united front, his personal experiences with racism as a black man, and why he’s using his platform to speak out.

CANPL.CA: Why was it important for CPL players to demonstrate together during the Cavalry-Ottawa match?

KYLE PORTER: It’s easy for everyone to walk around with a T-shirt that says, “Black Lives Matter.” A lot of us felt that the message the movement was slowly dying down. When the news broke about Jacob Blake getting shot seven times and people saw the graphic video of it, I think it woke a lot of people up again that these issues aren’t going away.

It was important for us to use our platform, to stand up and speak up about this stuff that’s happening in the world. I’m just proud to be part of a united and diverse group of players who are demanding change, and that’s what we stood for on that day, and will continue to stand for moving forward.

CANPL.CA: Did CPL players consider going on strike and not playing games, like NBA players did in the aftermath of the Jacob Blake incident?

KYLE PORTER: We wanted to show a united front, while still playing the game we love, but also stand up and deliver a message that was powerful and impactful. I think we did that. While viewers are watching the game and they see that it stopped, I think a lot of them were asking why we did that. Maybe they started to think about what “Black Lives Matter” is about; people need to understand why we did it and why we are taking this stand, and I think we accomplished that.

CANPL.CA: Can you tell me about your personal experiences with racism as a black man?

KYLE PORTER: I walk down the street and a lady crosses to the other side while clutching her purse because she’s scared to walk past me. Or, I’m driving my car and the music is too loud, and the cop pulls me over for no other reason because I’m black, and I’m scared because I didn’t do anything wrong. Or, I’m being followed in a grocery store because I’m a person of colour.

As a black man, you feel like you have a target on your back all the time, and you can do no right. It’s something I’m used to, and at one point in my life I was numb to it.

CANPL.CA: How does suffering that kind of indignity on a regular basis make you feel?

KYLE PORTER: It invokes rage and anger – to have someone who doesn’t know you at all but yet they’re judging you because of the colour of your skin. … I don’t have an explanation why my friends and I are turned away at the door of clubs, and that happens all the time. I don’t have an answer as to why any establishment would feel threatened by having black people there. I don’t get why a woman crosses to the other side of the street. I don’t understand it. I don’t have these answers. I just know it’s wrong.

CANPL.CA: Do you ever fear for your life at all? Are there times when you think that you could wind up dead as a result of some interaction you might have with the police?

KYLE PORTER: 100 per cent. My parents, when I was young they didn’t want me to go out. I could never understand why. But now I get why they felt that way. I understand the reality – I can’t control the people who have the power. For me, I’ve been in scenarios with the police where I’m standing there thinking something could go wrong through no fault of my own.

I’ve been pulled over and had lights flashing in my face, and I can see that the cop has a gun ready to draw. When I ask why they stopped me and I’m told it’s because I have a cross hanging from my rear window and it’s distracting to other drivers – no, it’s because I’m a black man driving a nice car. So, yeah, I fear for my life many times because there are moments when I can’t control the situation. For me, and many black men, we get put into scenarios that the average white person doesn’t, and the wrong reaction leads to deadly consequences.

CANPL.CA: You’ve played in the U.S. and Canada during your club career, but also in Germany. Did you experience racism while playing for Energie Cottbus?

KYLE PORTER: It was a very tough experience going to a place where I was the only person of colour in the city. You walk anywhere around the city and people stop to stare at you. I had away fans talking all kinds of hateful stuff at me. I dealt with being called a monkey and all sorts of things; people throwing garbage at me on the team bus. Seeing how much rage they have in their eyes because they hate you based in the colour of your skin, it’s a scary thing. Going to a local bar and being told at the door, ‘Sorry, it’s not your kind, tonight. Please don’t come back,’ – these are things I dealt with while I was in Germany. A lot of ugliness.