Soccer fans are now able to look back at one of the best stories of the 2019 Canadian Premier League season, with the release of a brand new “Forever First” video.

“Forever First: First Brothers” was posted to the CPL’s YouTube and IGTV channels on Tuesday for all Canadian soccer supporters to watch.

FC Edmonton’s Bruno and Allan Zebie were the subject of this week’s video, which tells the story of how they became the CPL’s first pair of brothers to line up together for the same club.

Both players were key pieces of the Eddies’ lineup in 2019, with Bruno making 25 appearances, and Allan making 27 (including all four of the club’s Canadian Championship matches).

The two Zebie brothers played under FCE coach Jeff Paulus for many years, having featured in the club’s academy and then for the Eddies in their NASL days. Allan, the older brother, played 58 times for the prior iteration of FC Edmonton, while the younger Bruno played twice for the NASL Eddies before switching to play for the Calgary Foothills for two years.

Before the club’s inaugural CPL season, FC Edmonton announced they’d be reuniting the Zebie brothers for 2019. Allan was revealed as one of the club’s first-ever signings, while Bruno came on board a couple of weeks later.

“We started together in the academy, so we played together for a while. (We) always had the same goals, always wanted to play at the highest level. Playing together, pushing each other was always great,” Allan Zebie said.

“I’ve known them both since the age of about 14, coached them both in the National Training Centre. They excelled as long as I’ve known them in Edmonton,” Paulus added. “Once we knew we were going to the CPL and I was named the head coach, (Bruno) was one of the first players I wanted on the team, because of his work rate. He’s very much like his brother. Both of them have massive engines, just passion for the game.”

“To see Bruno finally get his chance at going professional in this league, this validates the CPL for me.”

Bruno Zebie made further headlines earlier this year when he signed for Cavalry FC. When the 2020 season kicks off, the two brothers will make history again, as the first pair of siblings to play against each other in a CPL match.

Watch “Forever First: First Brothers” by subscribing to the CPL’s YouTube and IGTV channels, or by clicking on the video player at the top of the page. 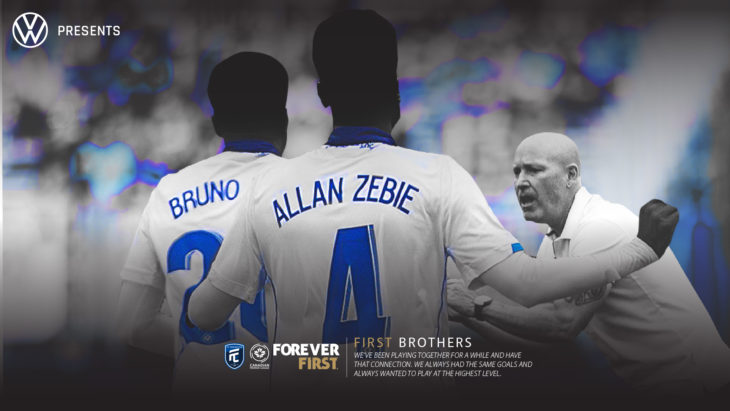