Soccer fans are now able to look back at the first coast-to-coast match in Canadian Premier League history with the release of a brand new “Forever First” video.

“Forever First: First Coast-to-Coast” was posted to the CPL’s YouTube and IGTV channels on Tuesday for all Canadian soccer supporters to watch.

If you weren’t among the crowd at Westhills Stadium on April 28, 2019, you have a chance to relive the game as Pacific FC earned a 1-0 win over HFX Wanderers FC in the coastal derby, becoming the first team to register a victory in the Canadian Premier League.

A 23rd-minute goal by Pacific defender Hendrik Starostzik proved the difference between the two coastal outfits, with the German centre-back earning the distinction of scoring both the first header and the first goal from a corner kick in league history.

Pacific had opportunities to double its lead, with Ben Fisk in particular proving a handful for the HFX backline. Matthew Baldisimo’s exquisite cross in the 51st minute was picked up by Fisk, who tested HFX goalkeeper Jan-Michael Williams with a powerful shot, which the Trinidad and Tobago international cooly deflected away.

HFX’s Juan Diego Gutierrez and Akeem Garcia threatened at the other end of the field with their speed and combination plays, though striker Tomasz Skublak did not see out the full match, coming off before the hour mark.

Pacific star Issey Nakajima-Farran made his CPL debut in the 56th minute, replacing Victor Blasco up top. The Canadian immediately involved himself in the play, doing well to offer a different look to Blasco in attack, though with no end product to celebrate by the 90-minute mark.

Pacific coach Michael Silberbauer was forced to survive the final stanza of the match after defender Lukas MacNaughton picked up a second yellow card – and, thus, a red-card ejection – in the 73rd minute.

Apart from a near chance by Starostzik in the 76th minute, as well as an acrobatic effort by Gutierrez three minutes afterward, Stephen Hart’s side couldn’t muster the opportunity needed to take advantage of their extra man.

Watch “Forever First: Coast-to-Coast” by subscribing to the CPL’s YouTube and IGTV channels, or by clicking on the video player at the top of the page. 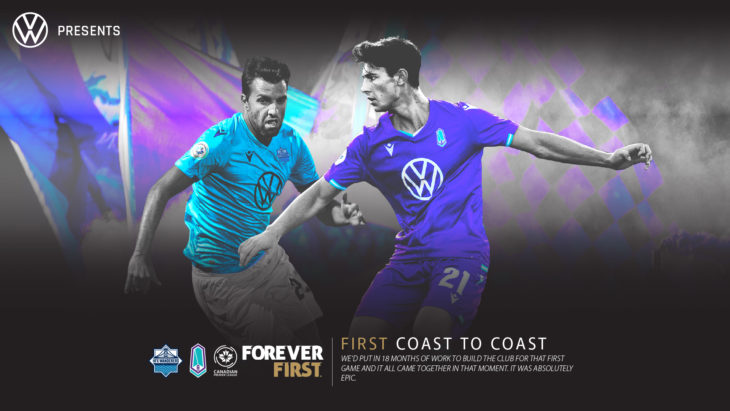