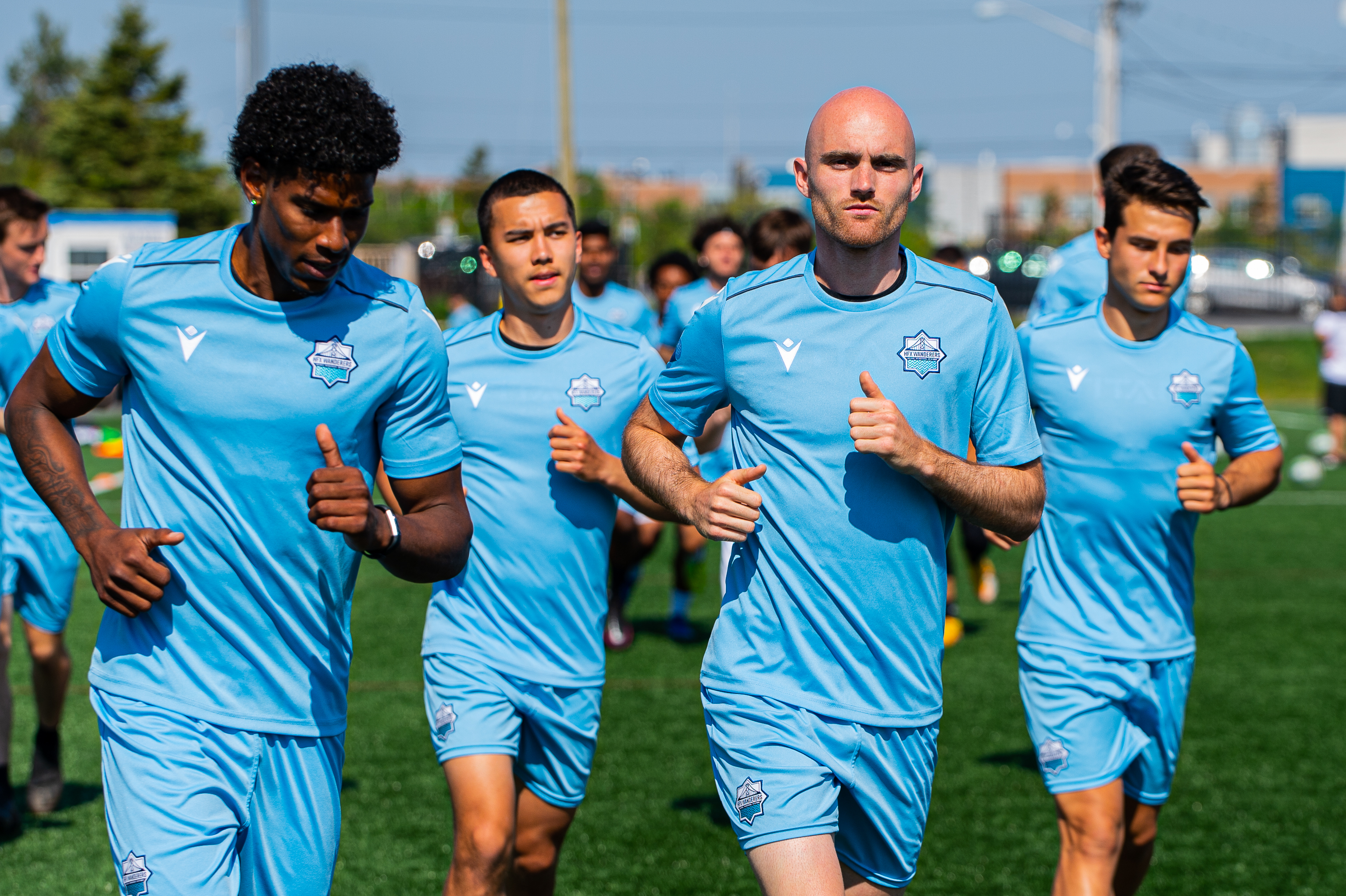 With “The Kickoff” presented by Volkswagen, all eight CPL clubs set to travel to the heart of the continent – Winnipeg, Manitoba – for a four-week, 32-game single site start to the 2021 CPL season starting June 24. It’s an unusual, but necessary, start to the Canadian footballing season, as COVID-19 restrictions continue to hinder what a full CPL season could be.

The CPL’s return to a single site follows the Island Games – a 35-match 2020 tournament held on Prince Edward Island. Forge FC of Hamilton emerged victorious from that season, repeating as CPL champions following a dramatic North Star Shield-winning campaign in 2019.

As Canada’s professional soccer league prepares for its third season in a peculiar way, we here at CanPL.ca have decided to cover the basics and keep you up to speed.

Here’s everything you need to know about the 2021 CPL season starting with The Kickoff in Winnipeg.

Season to begin in Winnipeg with The Kickoff

First things first: COVID-19 restrictions have sent the league and its teams to a sequestered IG Field with the goal of returning to home markets when vaccinations and restrictions allow them to do so.

“The reason why we’re in a single site is because we want to get started,” CPL commissioner David Clanachan said in a Q&A with CanPL.ca. “We were never going to get started this way, based on the geography of the country, in our home markets.

Why Winnipeg? Well, there were a number of factors, according to Clanachan.

First off, it’s home to IG Field – home to Valour, the Winnipeg Blue Bombers of the CFL, Manitoba Bisons of U SPORTS. It also hosted matches for the 2015 FIFA Women’s World Cup.

“IG Field is a world class facility. We have Valour FC that operates out of there daily which means we’ve got a built-in off-the-field team there,” Clanachan explained, comparing to the from-the-ground-up 2020 Island Games on Prince Edward Island.

Winnipeg was also a solid Canadian option among 10-plus others that, Clanachan revealed, could have sent the league and its clubs to Europe, the Caribbean, or the United States.

Coach Alan Koch’s first game in charge of FC Edmonton will be made an even bigger occasion later this month.

The Eddies face Atlético Ottawa in the 2021 CPL season opener Saturday, June 26 at 2 pm ET (1 pm CT) followed by the Coastal Clash between Pacific FC and HFX Wanderers FC (5 pm ET/4 pm CT). Edmonton vs. Ottawa has a bit of history in Canadian soccer despite the geography. Ottawa Fury and the Eddies squared off in numerous exciting matches last decade in both the NASL and Canadian Championship.

The full slate of Winnipeg matches can be seen here.

Each CPL club is scheduled to play eight matches in Winnipeg broken up, quite simply, as two matches each against opponents from the opposite side of the country. For example, the three Ontario teams (Forge FC, York United, Atlético Ottawa) and HFX Wanderers FC will exclusively face Valour FC, Cavalry FC, FC Edmonton, and Pacific FC.

This isn’t an “east vs. west” scenario: It’s designed to reduce travel for when CPL clubs can return to market, which league officials have pegged for August. This also allows for teams in the eastern and western sections further flexibility when it comes to travelling between provinces and, by extension, differing COVID-19 protocols and restrictions.

Forge will kick off their title defence at a disadvantage. Bobby Smyrniotis’ side, along with York United, has been unable to train in full groups due to COVID-19 restrictions in Ontario. York, coached by former men’s national team fullback Jimmy Brennan, appear to be at a greater disadvantage considering the team’s major makeover this off-season.

What will happen after the four weeks in Winnipeg is still up in the air. Commissioner Clanachan says the League will be flexible regardless.

“We could extend our stay, we could go back to home markets, we could only play in the markets where games will be allowed to be played,” Clanachan said. “We’re very confident that we’ll see that — all the way to playing in front of fans and supporters by the time we get to the end of July and into August.”

The CPL is also still focused on playing a full 28-game season.

“We are absolutely laser-focused on getting our full season in. It is so important to us,” Clanachan said. “You can’t be any more flexible than what we are right now, but we’re always fixated on our goal of getting the full season in while preserving our reputation of doing it the right way and keeping people safe.”

CPL clubs won’t be able to play in front of fans just yet… But that hasn’t stopped them from honouring their communities. Macron-designed 2021 “Community” kits set to be worn during The Kickoff feature iconography from back home; HFX Wanderers FC, for example, showcases a lion rampant on the front of their blue-on-blue 2021 kit – an image seen in the middle of Nova Scotia’s flag. Pacific FC’s new 2021 kit features lines inspired by waves off Vancouver Island, etc. Clubs have the option to mix-and-match kits worn in 2020, too, so expect a series of designs worn in Winnipeg.

Storylines for each CPL club

Forge FC is attempting to three-peat as CPL champions and look in good shape to at least challenge. A total of 15 signees are returning from their 2020 team – 12 of them won in Hamilton in 2019. Former Player of the Year Tristan Borges has returned on loan. Former Canadian men’s national team defender David Edgar retired… and was replaced by fellow CanMNT standout Dejan Jakovic. Easy as that.

Up the highway, York United is a new-look club in every sense of the word; new crest, new name, new colours, new stadium upgrades, and a revamped squad. Coach Jimmy Brennan will see 14 new names on the teamsheet, including some familiar ones to CPL fans. Dominick Zator has come over from Cavalry, former HFX fullback Chrisnovic N’sa signed on following a best young player nomination at the CPL Awards, and Noah Verhoeven joins from Pacific. A litany of international players have been unable to join York due to visa issues caused by the pandemic.

It’s hard to suggest Kickoff hosts Valour FC will benefit from home-field advantage at IG Field as only three players – Federico Peña, José Galán, and Raphael Ohin – have played a match there. Coach Rob Gale has a “good healthy base” from the Island Games where they showed glimpses of quality but succumbed to injuries. Former Brazilian Serie A standout Raphel Galhardo might be the biggest signing in CPL history and Gale is prepared to play him where he sees fit.

HFX Wanderers FC looks poised to build on their 2020 CPL Final appearance by retaining a solid core from the Island Games group. Golden boot winner Akeem Garcia is joined by newcomers Morey Doner and Jérémy Gagnon-Laparé that promise to retain the guile seen from their turnaround run last season.

Pacific FC has similarly focused on continuity with coach Pa-Modou Kah taking its young core to Winnipeg as a spirited bunch. Winger Marco Bustos is the odds-on favourite to win Player of the Year while former York midfielder Manny Aparicio – who was at the top of Kah’s off-season wishlist – completes a robust midfield.

Coach Mista and Atlético Ottawa return from Spain with a couple suntans and a new-look squad. Ottawa famously scrambled to put a team together last Summer after launching the club into the early stages of a world pandemic. The club has reworked that makeshift 2020 Island Games side that finished seventh with Canadian soccer stalwarts like midfielder Chris Mannella, winger Ryan Telfer, and defender Drew Beckie. Newcomer wildcards have been added, both from Spain and at home, that make Mista’s side a mystery.

All matches available on OneSoccer

As always, OneSoccer is your home for all CPL matches broadcast live from Manitoba. To subscribe, click here.