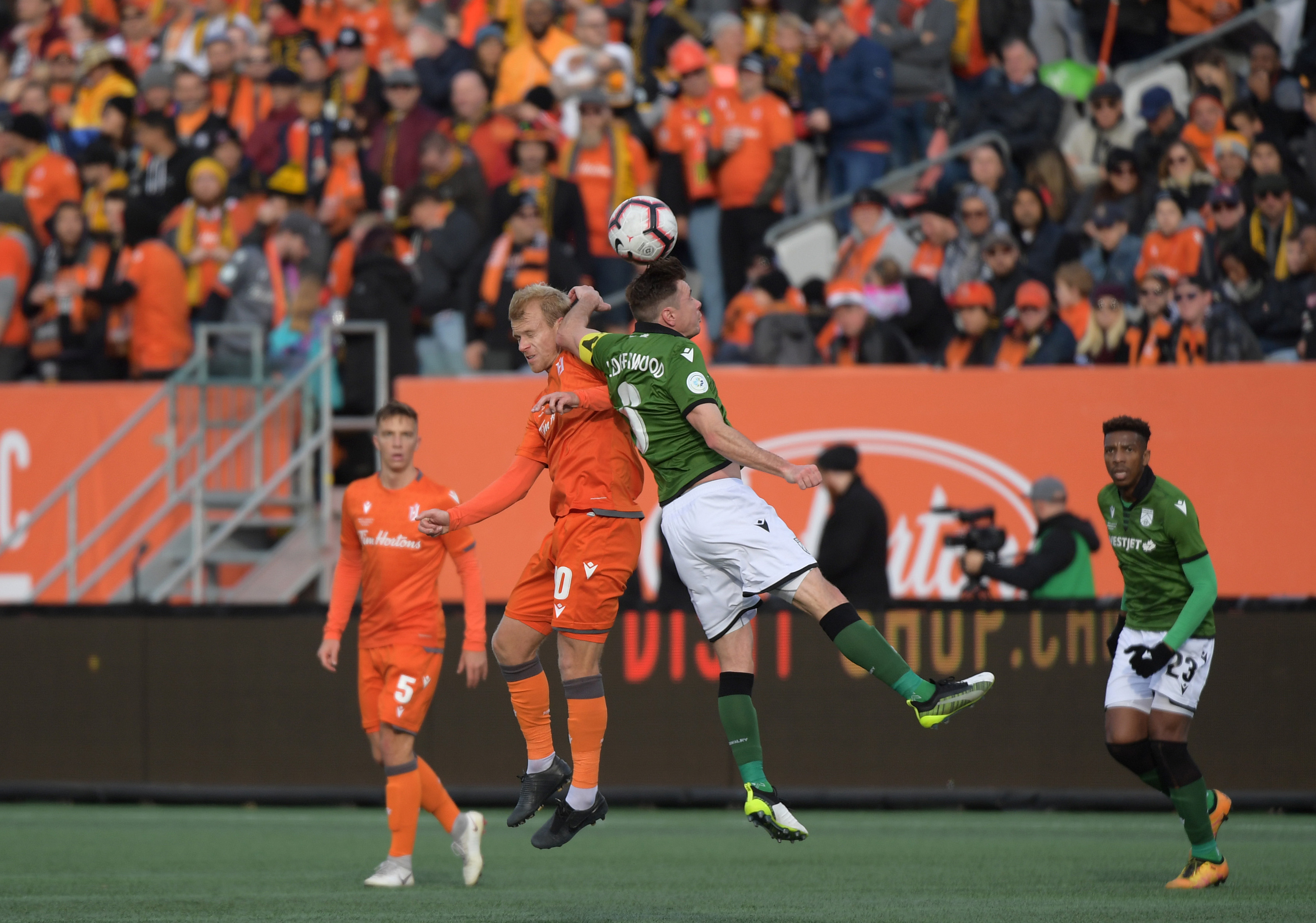 Forge FC and Cavalry FC managed to keep things interesting in their eighth match of the season over the weekend at Tim Hortons Field.

Leg 1 of the Canadian Premier League Finals featured two sides that were, well, probably sick of seeing one another.

Still, the idea of an eighth and ninth match against the same team presents a strange prospect.

As Cavalry coach Tommy Wheeldon Jr. aptly put it after his team’s 1-0 loss, Leg 1 was full of curveballs; two red cards and several moments of controversy made Saturday’s match seem like anything but a season finale.

Tactically, both Wheeldon and Forge coach Bobby Smyrniotis had some tricks up their sleeves.

Here are three key matchups to look for in Leg 2 of Finals 2019 on Saturday at ATCO Field in Calgary.

Forge winger Chris Nanco had an absolute field day on Saturday with teammate Kwame Awuah behind him at fullback. The pair overran their opposite, Cavalry’s Dominick Zator, in a clear directive from Smyrniotis. Nanco set up Borges’ winning goal and completed produced numerous scoring chances as a tricky and direct attacker.

Smyrniotis was pleased with the duo’s work, too.

“Combining well put (Cavalry) on the back-foot, not only from an attacking end, but their defensive work: because of the way they attacked we were able to pin them a little bit further back and they neutralized guys like (Nico) Pasquotti and (Jose) Escalante,” Smyrniotis said after the match. “They did a lot more work defending, so they were excellent on both sides of the ball.”

Zator will likely stay at right fullback for Leg 2, with Jay Wheeldon replacing the suspended Joel Waterman in the middle. Nanco and Awuah clearly exploited Waterman’s lack of pace. So who slides in to help? Or does Spruce Meadows present something entirely different?

With Tristan Borges’ Leg 2 future uncertain as of writing, we turn to Forge’s other “Killer Bee.”

Saturday was a perfect example of what you don’t want Kyle Bekker to inflict on your team over 90 minutes; some 60 passes completed, several chances on goal and lots of space to operate. Some of this space came from Cavalry trying to smother Borges, sure, but that’s not an excuse – the Cavs need to continue to play with speed and urgency to keep Bekker from holding the ball.

In this exercise, we choose captain Nik Ledgerwood – but it’s job for the Cavs’ midfield as a whole. Don’t let Bekker spread play out the way he did at Tim Hortons Field.

Julian Büscher had a shockingly quiet game going forward in Leg 1 – no attempts on target or key passes, and he completed just half of his passes. He was solid defensively, though, as to be expected from the box-to-box midfielder. Thing is, Büscher was rarely settled in Cavalry’s midfield. Chasing the pack, the German was forced to try and gain possession and pass rather than have the ball recycled to him.

Turn to Alexander Achinioti-Jonsson. In the hole, Jonsson squeezed the midfield with some excellent positional play. Keeping Büscher in front of him, the Swede kept him from making any sort of attacking move, something that will, more often than not, lead to a scoring opportunity.

If Büscher breaks from the shackles in Leg 2, Cavalry could move closer to becoming Canadian Premier League Champions.