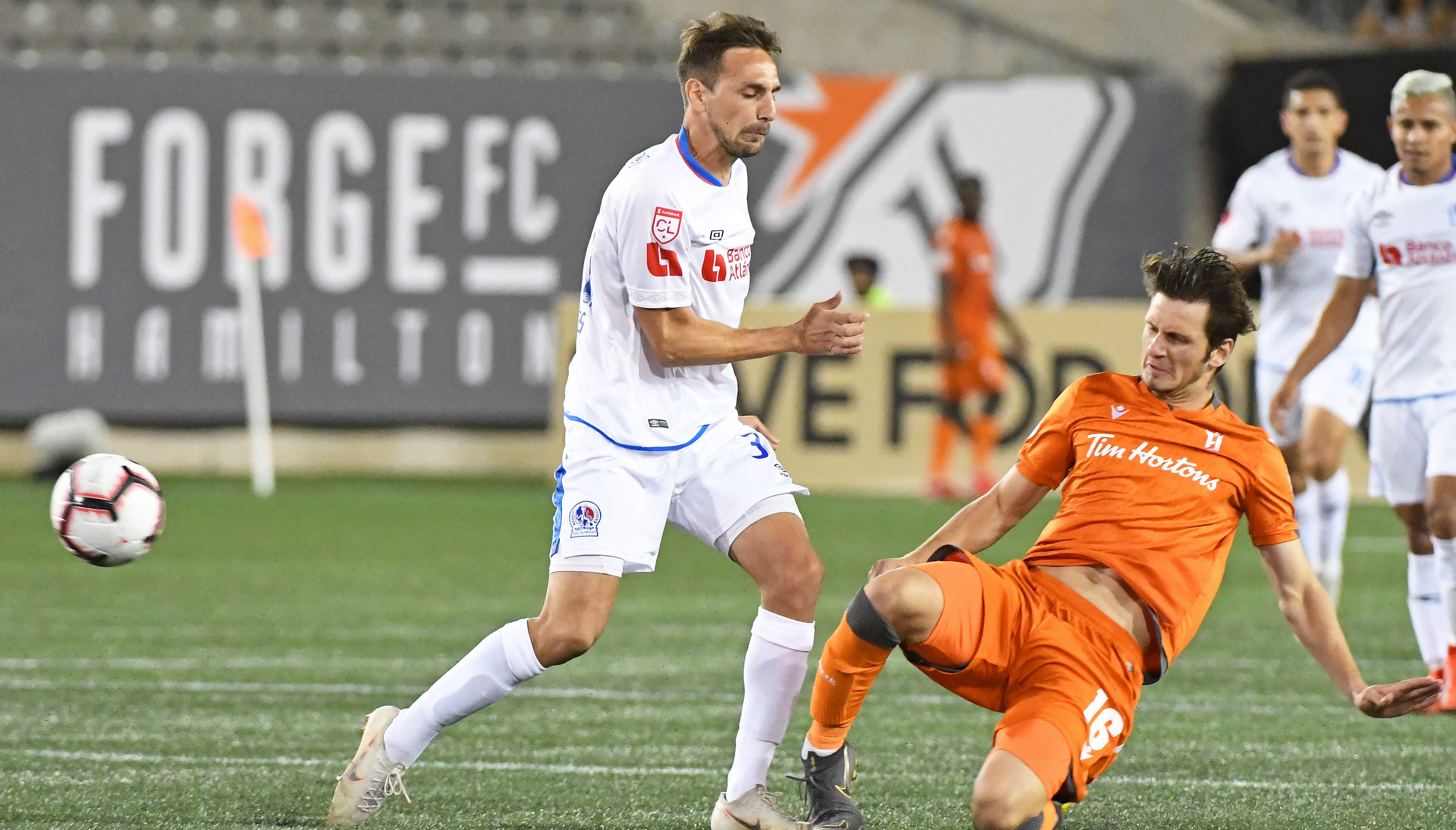 It wasn’t pretty at times, but Forge FC aren’t complaining.

The Canadian Premier League outfit added another chapter to its storied run in this season’s CONCACAF League tournament with a 1-0 home win over Honduran giants Club Deportivo Olimpia on Thursday at Tim Hortons Field.

Forge forward Chris Nanco was the hero on the night, scoring the game’s lone goal to give the CPL side the advantage going into next week’s return match in this Round of 16 series.

But Franco’s goal wasn’t the only key juncture in the match; there were plenty of others involving teammates Kyle Bekker, Triston Henry, and David Edgar in a gritty performance by Forge.

Here are the five big moments from the game.

1. Nanco scores to give Forge an early advantage

Forge came flying out of the gate, putting Olimpia on the back foot right from the opening kickoff with their fearless attacking play in the final third.

The visitors looked shell shocked, and Forge took full advantage. Chris Nanco made a great run down the right flank, burning former Vancouver Whitecaps defender Johnny Leveron along the way, before beating goalkeeper Edrick Menjivar at the near post with a composed finish to give the home side the lead in the fourth minute.

Incredibly, that goal didn’t seem to wake up Olimpia from their slumber, as they continued to look lackadaisical early on, and Forge nearly punished them again.

Defender Kwame Awuah was given all kinds of time and space down the left wing before he cut the ball across the middle to teammate Kyle Bekker. The Forge captain unleashed a piledrive of a shot from 25 yards out that beat Menjivar but smacked the post. A few more inches to the right, and Forge would have been up 2-0.

The Honduras finally came to life after the Bekker close call, and began to dominate possession and dictate the pace of the game. All of Forge’s early good work looked to be undone midway through the first half when midfielder Giuliano Frano conceded a penalty.

But Forge goalkeeper Triston Henry came up big – as well as coming off his goal-line early – to stop Ever Alvarado’s attempt and keep it a 1-0 game.

Henry wasn’t done for the night, as he was repeatedly called up to make athletic punches off crosses played into the box and some crucial saves with Olimpia in the ascendency.

A Forge turnover in midfield at the half-hour mark led to Olimpia breaking the other way, with Junior Lacayo latching onto a defence-splitting pass inside the penalty area. But Henry was alert to the danger, and rushed out to close down Lacayo, getting a piece of the Honduran forward’s flicked shot as it just trickled past the far post.

An equalizer seemed inevitable in the second half for the Hondurans, who continued to tighten the screws on Forge with wave after wave of attacking pressure.

But Forge also benefited from a bit of good fortune, including in the 87th minute when they couldn’t quite clear their lines in a goal-mouth scramble that ended with Jorge Benguche ballooning his angled attempt from in close over the cross bar.