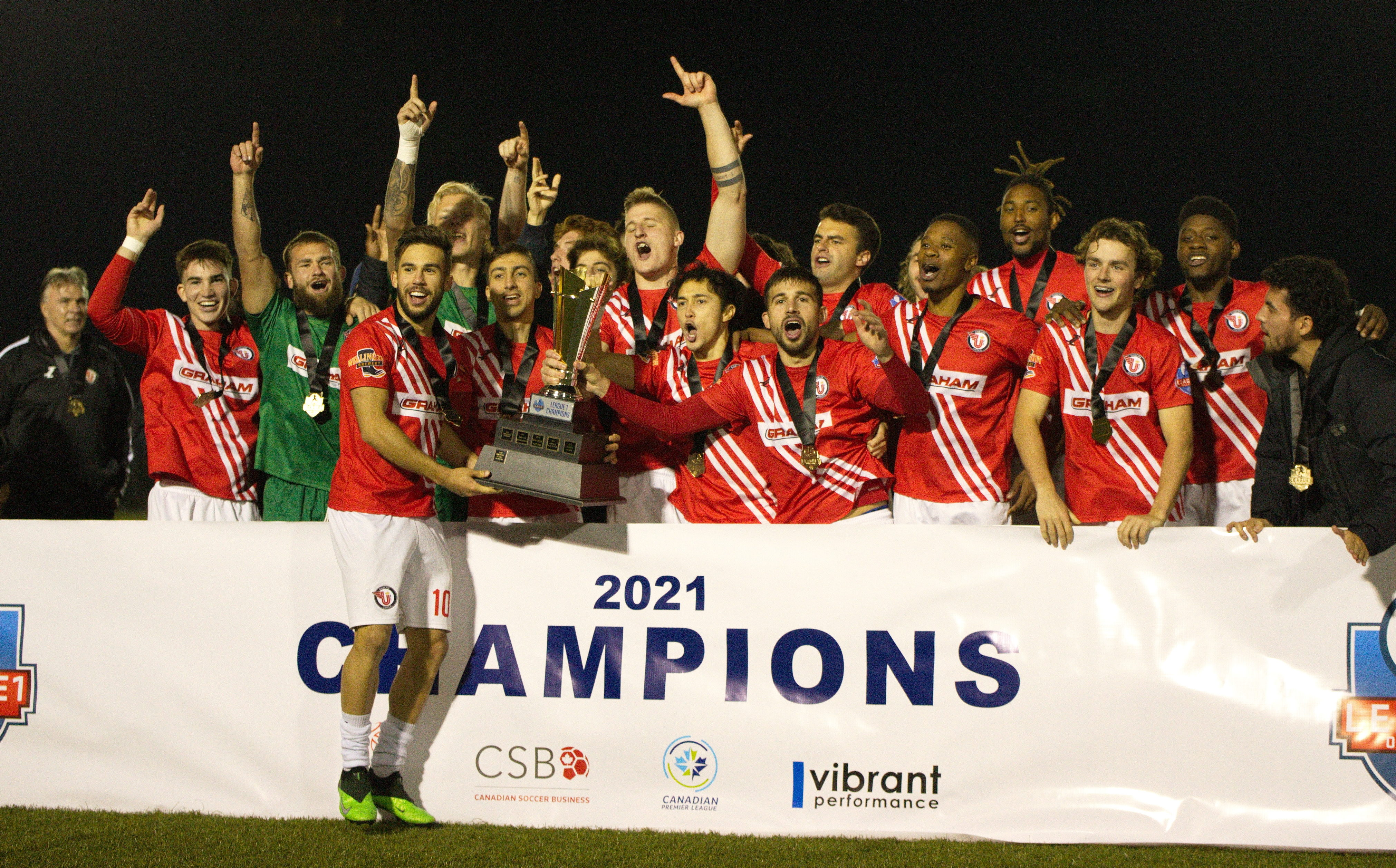 One year ago, Guelph United FC had never kicked a ball in anger in League1 Ontario. On Tuesday night, just under 10 months since their maiden voyage, they’ll represent the league — as its champions, no less — in the Canadian Championship, playing host to CPL opposition in HFX Wanderers FC.

The story of the 2021 L1O campaign was surely Guelph’s unabated surge to the top. They burst onto the scene with a 6-0 win over the previous season’s finalists, FC London, in their inaugural match, and they never looked back from there. They would go on to win 10 of their 12 regular-season games and finish atop the West Division standings, before beating reigning champs Master’s FA on penalties in the semifinal and then beating Oakville Blue Devils 3-1 in the final to lift a trophy in their first season.

Now, they find themselves staring down a professional opponent in the nation’s premier cup competition. They’ll be welcoming Stephen Hart and the Wanderers to Alumni Field, with one eye on making some more history: No team from either League1 Ontario or PLSQ — the two semi-pro leagues that compete for the Voyageurs’ Cup right now — has ever eliminated a CPL side.

Who is this upstart phenom of a club, though? How have they risen to the top so quickly, and why might they pose a tricky challenge for Halifax on Tuesday?

It begins with Keith Mason, one of two associate head coaches at the club (alongside former CPLer Justin Springer). Originally from West Bromwich, England, he’s been coaching in Guelph since the 1980s, taking charge of the University of Guelph’s men’s team in 2000. When he, along with co-founders Benny and Ami Mezezi, first established this club, he vowed to help bring a higher level of football to the region he’s called home for so long.

“I just love the place, and we’ve always dreamed of bringing that next level to Guelph,” Mason said Monday on the CanPL.ca Newsroom. “It’s a soccer community that’s never been one of the biggest in terms of, you know, the Oakvilles and Scarboroughs and all these teams, but it’s always been a soccer community, like a family club. We’ve always wanted to bring a higher level of competition to the pyramid of play, and finally we’ve seen that come to play. To be able to do this right in our own backyard, I can’t explain how exciting that is.”

Tomasz Skublak, a key piece of Guelph’s success in 2021, shed some light on how this particular staff has pushed the club forward.

“One of the most important things the coaches do here is they actually allow the players to give input on what they think we should do, kind of seeing ideas from the player’s perspective,” he said. “If you have players that come from experience, understand the game, their input is just as important as a coach who’s been in the game for 10, 20, 30 years coaching. I think the moral of this point I’m trying to get at is each person brings a unique individual input on everything; getting ideas from everyone and collaborating on them makes them more successful.”

In preparation for the club’s debut in League1 Ontario in 2021 — a little delayed due to COVID-19 — Mason and Springer put together a squad that could be competitive right away. The team for their opening match, that 6-0 drubbing of London, featured a healthy amount of professional experience, including former CPLers Skublak (HFX Wanderers), Jace Kotsopoulos (York/Forge), and Nico Galvis (Valour). Plus, defender Amardo Oakley, who boasts a resumé of pro appearances in the U.S. and in the Portuguese third tier (where he captained Algarve CF), joined the club after an illuminating chat with captain Kotsopoulos in 2021.

Guelph’s wealth of pro leadership, though, is also complemented by something just as important: a rock-solid local foundation, including a primary cast of players that Mason knows so well from the University program. In fact, a total of 13 players on the club’s Canadian Championship roster also played U SPORTS football for the Gryphons in 2021. CPL teams — the Wanderers in particular — know how well university-level players can stack up, so the younger core of the Guelph United squad will surely be competitive too.

“A lot of the guys know how each other play, we’ve had experiences with each other before,” Skublak suggested. “Sometimes it’s not about how talented each individual is, it’s how a team works together. We’ve had these coaches that we’ve (known), some of us, for two to four years… I think that atmosphere, that kind of chemistry brought us forward and propelled us from what was supposed to be a three year plan into one year.”

Added Amardo Oakley, a veteran defender for the team: “The club just feels special. Guelph is not necessarily a big soccer community but it’s growing, and when the national team qualified for the World Cup I think people started to realize that now they have something local they can come and support. And not just any kind of football, I think the level was really high. You have some guys that played in the CPL on this team, some guys that are coming from overseas, so when they’re on the pitch our level and our game sort of speaks for itself.”

Still, it was the star power that carried them over the line to the championship. Kotsopoulos blew the rest of the league out of the water with his 15 goals — four more than second-place — and his teammate Skublak finished in fourth with 10. Kotsopoulos and Oakley were top of League1 in minutes played as well, with 1,043 and 1,035 respectively, as the club developed a consistency that few opponents seemed able to match.

In the final, it was — of course — Kotsopoulos (twice) and Skublak who put Guelph over the line in the 3-1 triumph.

“It being our first year and we won the league, it’s not something that anyone could’ve ever thought of,” Oakley said on Monday. “I’m sure some of us said we want to get out and win, but sometimes when you bring a group of players together it doesn’t always work. For us, it was something special, it just all fell into place.

“And it wasn’t just on the field that we had a relationship with all the guys, we’re all very close off the pitch, and I think that separates us from a lot of other teams in the league. And we have poise and hunger from a lot of veteran guys that we have here, but also the younger players, they’re talented and everyone brings something special to the table. We just have to thank the coaching staff and everyone that’s worked so hard behind the scenes to put this all together; I think it was just meant to be.”

This time around, knowing they had this Canadian Championship clash on the horizon, Guelph muscled up, even more, to try and defend their title in an ever-improving League1 Ontario. Perhaps their splashiest signing was that of Marcel Zajac, a two-time Canadian Premier League champion with Forge FC who has returned to his home province after a year spent abroad playing in Poland. The shifty winger had impressive moments at Forge, playing 30 games for them over two seasons. Zajac has, so far, started all three of Guelph’s games this year, and already he has two goals to his name.

“When I came back here I was looking around, but things weren’t able to fall with some other clubs,” Zajac told CanPL.ca. “Then I looked at Guelph, and I knew some of the guys here already, playing with them, playing against them. I knew they had quality here. I spoke to the coaches and heard about their ambitions for the club; I knew I had to be in a good spot where I could get regular playing time and get back to the point I was capable of.”

Plus, Guelph bolstered their defence with the addition of Reggie Laryea (yes, brother of men’s national team star Richie), who was previously a standout at York University — as well as at rival League1 side Sigma FC — and an Atlético Ottawa CPL-U SPORTS Draft pick in 2021.

All that is to say: there’s a lot of talent in this Guelph team.

“We’re definitely a possession-based team, like to keep the ball on the ground,” Mason said of his side’s style of play. “Good ballplayers who like to get on the ball; you look at Jace Kotsopoulos, and Alex Zis, and Marcel Zajac who we’ve picked up this year, they all like to get on the ball and play, and that’s the kind of player I’ve always liked. That’s what I was brought up with, I love it; I like the game to be played what I call the proper way, which is built from the back and keep possession as long as we can.”

Mason and his players have been realistic in their approach to Tuesday’s game. They know they’re underdogs against a well-organized Wanderers team that’s proven very difficult to defeat, even for CPL opponents. Zajac pointed out some tendencies in Hart’s sides he remembers from his time at Forge — their strong midfield commanded by Andre Rampersad, for instance, or their balls over the top to Akeem Garcia — and has shared with his teammates some tips on what to expect.

“It’s definitely going to be physical, and quicker than League1,” Zajac said. “Halifax have some quality players. I just tell guys, most importantly, go in with a good mentality that you are good enough to play against these guys. Don’t show any fear, because soon as we do that, the quality they have, they’ll step all over us.”

Still, Guelph United have already produced some magic in their short history. The idea of being the first League1 side to knock out a CPL team — and, in doing so, become the first to host an MLS side in Toronto FC (as they would, thanks to the way the draw shook out) — is a Cinderella story a community can get behind.

“For us, it would definitely be a Hollywood script. That’s how far-fetched it would be if you’d talked about it 12 months ago,” Mason said. “Here we are on the verge of being able to play the biggest game of not only our lives but the community of Guelph, with the opportunity of playing an MLS team in the next round…

“In terms of us being the first (L1O team) to win, someone’s got to do it. One day, someone’s gonna open that door and go, ‘We’re the first team to get to that next round and win that prelim game.’ I just say, hey, what about us? Let us be that team, tomorrow’s the day. Bang that door wide open.”