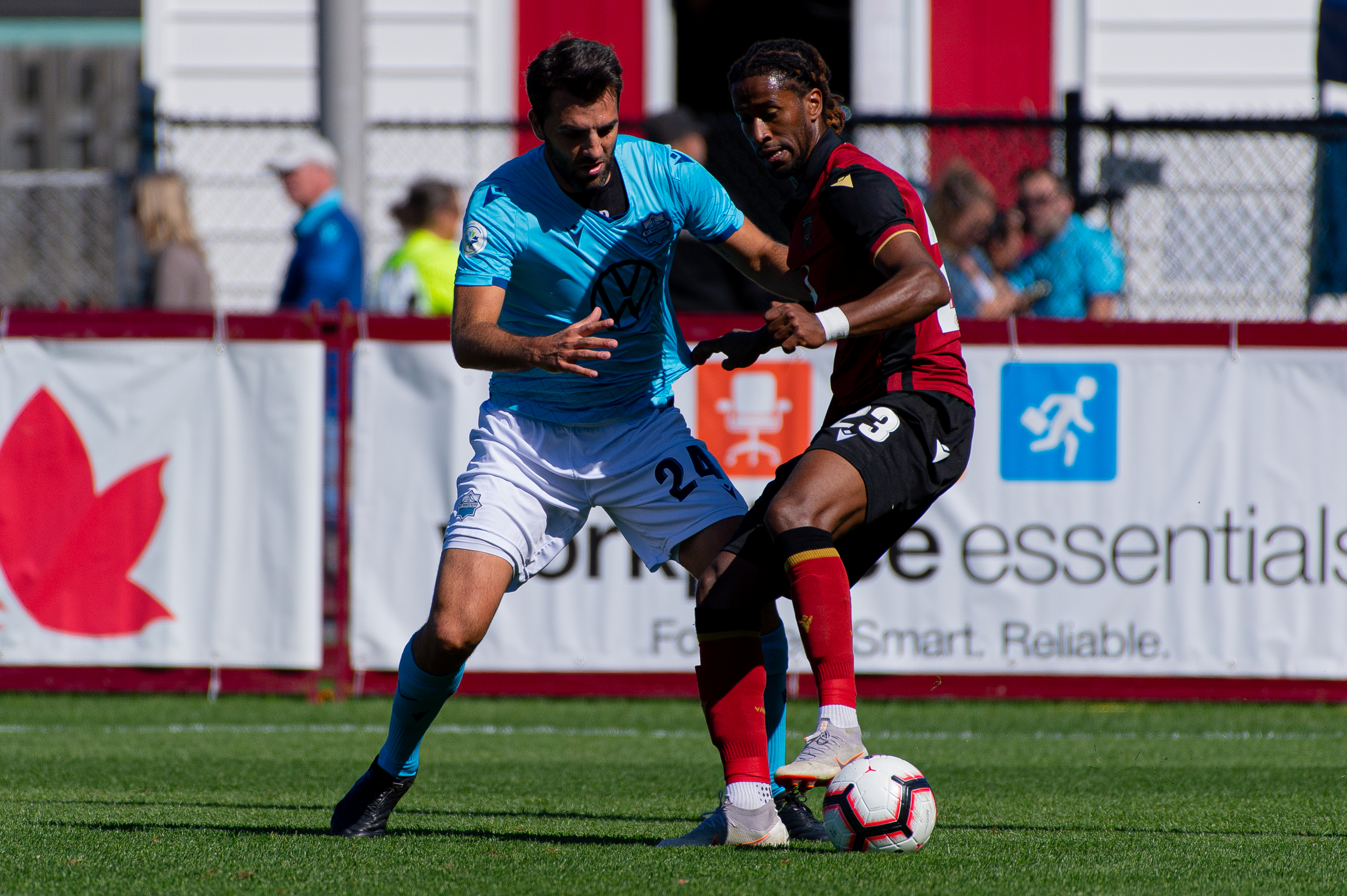 You’re not seeing double – we wrote this story about free agent Canadians being available for a potential 2020 CPL season just a few weeks ago.

But, as all things in the Canadian Premier League over recent weeks, things move fast.

For example, our last story listed Maxim Tissot as a big CPL free agent, but he was swiftly snapped up by Forge FC last week.

So, with transfer action heating up, and with fewer CPL roster spots still open, we thought we’d come up with a new list.

Released by Irish outfit Galway United last week, Dylan Sacramento could be an easy pickup for CPL clubs – and he is certainly good enough for a starting attacker role, something he didn’t get with Valour FC last season. While the 2018 League1 Ontario Golden Boot winner revealed he is not in conversation with CPL teams, a last-minute deal wouldn’t be surprising – especially considering the timing of his departure.

Just throwing this out there: There’s a potential CPL-ready centre back you’ve never seen before.

Joey Zupo is a three-time all-star in League1 Ontario and is coming off successful professional stints in New Zealand and Australia. He also played alongside current Cavalry FC goalkeeper Niko Giantsopoulos in Australia.

Now, would the 27-year-old be a CPL starter right out of the gate? Likely not. But, you can’t deny that resume.

Sticking with former Valour FC attackers, Ali Musse is worth another mention. Rob Gale’s enigma of a winger had a rough 2019 season with injuries and multiple position changes – the 24-year-old never got in a rhythm.

While unsigned from last year, Musse is still, in my eyes, a capable left-footed operator. Likely not a starter, but CPL coaches would be hard-pressed to find a better left winger or a “get-in-behind attacker” available on the market.

Mentioned in our last free-agent tracker, could Mo Babouli still make his way to a CPL club?

A former League1 Ontario standout-turned MLS regular with Toronto FC, the now-27-year-old is a free agent and is available to be snapped up. Babouli has had interest from York9 FC and Forge FC stretching back to the 2019 CPL pre-season, but neither party has locked the explosive winger.

It’s no secret that TFC II players are looking for a place to land after the USL League One outfit announced it is sitting out the 2020 season. As one of TFC II’s key players, Terique Mohammed would be a shrewd pickup. A skilled left-sided operator, the 20-year-old has featured as a fullback and an advanced winger for TFC II after forcing his way into the squad last \spring. Two goals and two assists in over 20 appearances makes Mohammed an easy pickup for depth on the left side. Could help a CPL club’s under-21s minutes requirement, too.

Another TFC II product, Jordan Perruzza will be looking to build upon his breakout 2019 campaign. The 19-year-old scored 15 goals in 24 matches in USL League One – a fantastic season among current Toronto FC crop Jayden Nelson and Noble Okello. A big-and-fast centre forward, Perruzza would fit in with most CPL clubs as an advanced forward. Toronto FC will be keen to get him playing time, too, as one of their greatest attacking prospects.

The former HFX Wanderers wide man remains on the list as his 2020 status is not yet decided. Tallying three assists – well below from his expected assists of 6.82 – Kourouma is an effective traditional winger at CPL level. Hopefully he’s heeded the warning about long shots from Centre Circle Data, though.

Georges Mukumbilwa did not travel with the Vancouver Whitecaps to the MLS Is Back tournament in Florida, and will likely play a bit-part in any MLS regular season. This leaves CPL as a convenient option for coach Marc Dos Santos, who already sent fellow homegrown signing Gianfranco Facchineri on loan to Atlético Ottawa. A quick and agile midfielder, Mukumbilwa has only one MLS appearance to his name.