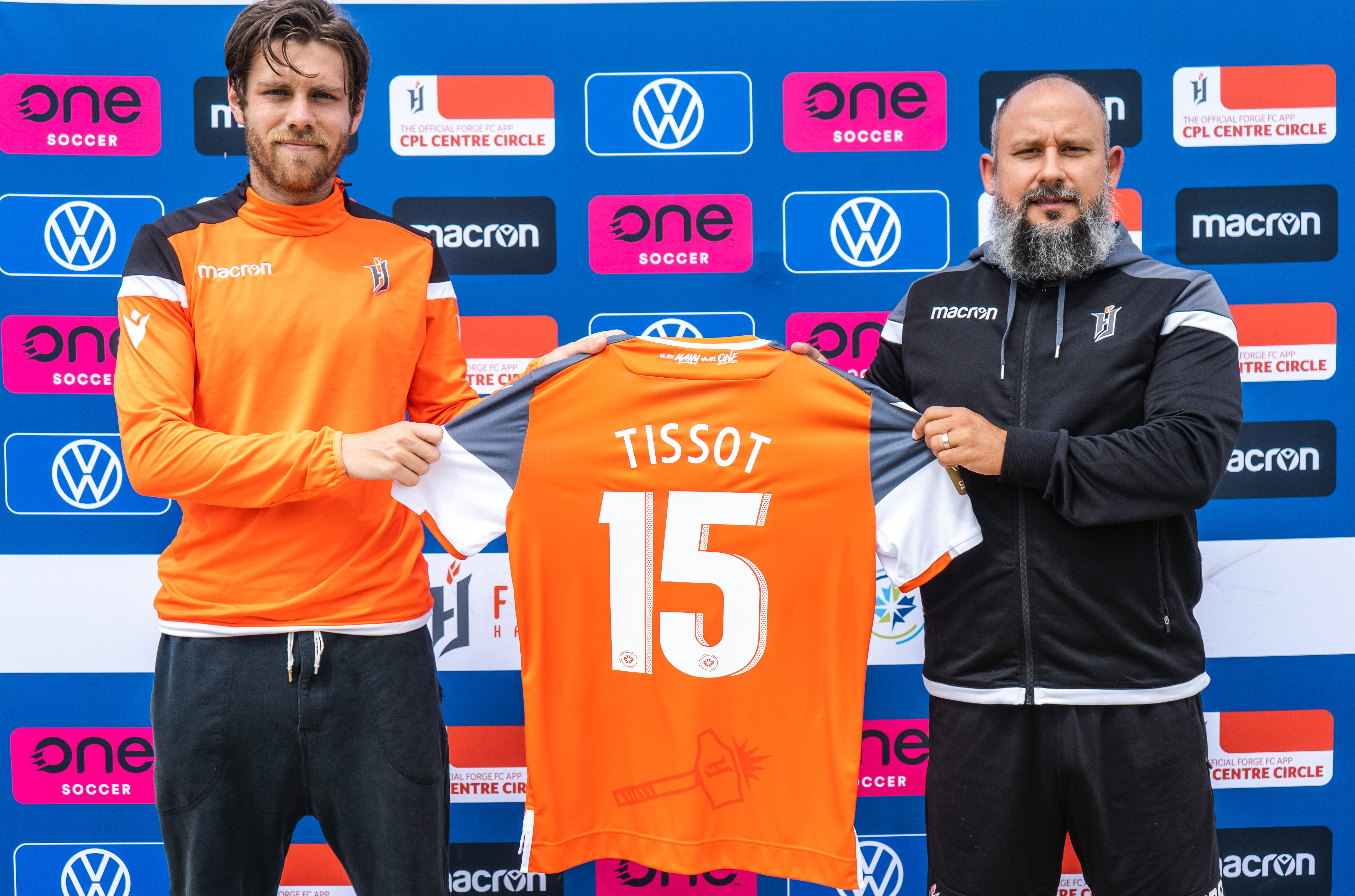 Maxim Tissot with Forge coach Bobby Smyrniotis.
Maxim Tissot gets lifeline from Forge FC: ‘I thought I might have to retire’
2020-07-22
by
John Molinaro, Director of Content (@JohnMolinaro)
News

The strong keep getting stronger.

Forge FC pulled off a major coup on Wednesday with the signing of Canadian international fullback Maxim Tissot, a move that sees the reigning CPL champions add a fair bit of quality and depth to their already-impressive roster.

For Tissot, a 28-year-old native of Quebec, coming to the CPL gives him a chance to kickstart his career after a pair of tough seasons with the now-defunct Ottawa Fury in the USL.

Michael Findlay, who coached Tissot during his brief tenure in charge of the Canadian men’s team, is a big fan of the left fullback and believes his “experience at the highest level in the game at both club and international environments” will be hugely beneficial for Forge.

“As the game is continuing to seek out naturally left-sided players, Max brings an overall skillset and ability to balance a team on both sides of the ball. His mix of physical, tactical and technical assets provides fluency from defending to attack which is required from the modern fullback,” said Findlay, who now serves as the CPL’s Director of Football Development.

CanPL.ca chatted with Tissot, who has been training with Forge for the past several weeks, about his decision to sign with the Hamilton-based club, his time with the Ottawa Fury in the USL, and his national team aspirations.

This interview has been edited for length and clarity.

RELATED READING: 4 reasons why Tissot is CPL’s most impactful signing of COVID lockdown

You’ve been without a team since the Ottawa Fury ceased operations last November. How did the deal with Forge FC come about?

Tissot: COVID really had an effect on things because I didn’t know if I’d be able to find a new team. Then when things slowly began to pick up and get back to normal, Forge reached out to my agent and there was interest from both sides, so we managed to work something out.

Did you have different options? Were there other clubs, both inside and outside of the CPL, that showed interest in you?

Tissot: There were talks (with other clubs) here and there. With the age I’m at now I was looking to stay closer to home and sign with a team that fit my profile and where I could grow. That limited my options, but I’m very happy to be with Forge and be just a short drive from home. It’s a good fit.

The core of Forge’s championship team from last year remains in place. How can you help Forge?

Tissot: They’re a very good team, and I got a sense of them by watching a few of their games last year. You can just see there’s a style they like to play – they try to keep the ball and play attractive football. Right now, they’re trying to have me in different positions based on the needs they have. I think I can help them in their possession game because I like to keep the ball.

You were a teammate of Forge captain Kyle Bekker with the San Francisco Deltas during the 2017 NASL season. Did Bekker play any kind of role in convincing you to sign with Forge?

Tissot: We kept in touch all of these years and we’re good friends, so he brought me up to Forge’s coaching staff, and he sold me to them. Once they saw me play and saw the versatility I could bring, they were very interested, so Kyle for sure played a part in me coming here.

What are your first impressions for Forge coach Bobby Smyrniotis?

Tissot: He’s a very good coach with a clear idea of how he wants to play. There’s a set of tactics in place. He wants players to move on the field in a certain way, and he gives us a lot of freedom, too. There’s a lot of variety in the training sessions and he always keeps you on your toes.

You’re primarily a left fullback, but you can also play in midfield. Has Bobby said how he plans to deploy you and what he sees as your role with Forge?

Tissot: When I first came in, he brought me into his office to meet with the coaching staff, and they gave me the rundown on how they see me fitting in, and then they asked me for my thoughts. They like my versatility; I’ve played in different positions throughout my career, so I think they’ll take advantage of that. I want to play at the end of the day. The position I’m most comfortable with is left back, but if I can be on the field and help the team, I’ll take whatever I can get.

As someone who kept close tabs on the CPL in 2019, what did you make of the league in its inaugural season?

Tissot: It’s a very good league; I was impressed. It’s a good platform for young players to showcase their talent, and we’ve really needed that in Canada for a long time. We’ve lost a lot of Canadian players at age 18 and 19 who got lost in the shuffle in MLS, or went to Europe where it’s hard to break in, or who just stopped playing. It’s a great league for the young players, and when you mix in veterans like David Edgar or Kyle Bekker, it goes a long way to help those young players to progress and get to the next level.

How do you look back upon your time with the Ottawa Fury, and the club’s decision to cease operations last year?

Tissot: It happened pretty quick. I think the staff there knew it was coming but didn’t want it hanging over our heads as we were in a playoff battle, so they were trying to protect us by keeping us out of the loop so we could focus on doing our jobs in the field. There’s no grudge on my part as to how they handled things. I had a great time in Ottawa. I’m from Gatineau, which is right across the river, so I was playing at home and there was a huge sense of pride playing from your hometown.

What were the last nine months like for you? The Fury shut down and then the COVID-19 pandemic hit, which had to have made finding a new team more difficult. Did you ever give up hope?

Tissot: There’s been a lot of uncertainty. The Fury folded and just as I finished wrapping my head around that and started to move on, COVID came. So, it’s been a bumpy off-season, and at one point I honestly didn’t think I’d play again. When COVID came, I had to figure out what I was going to do, but then Forge came along and things worked out. But for a second there, I thought I might have to retire.

You have 13 caps for the Canadian men’s team, but your last appearance came in 2017. Do you want to get back into the national team fold?

Tissot: I need to play well to earn a recall, and if Forge plays well then that’ll help my cause. But I haven’t thought about the national team, honestly. They didn’t really look at Canadian players in the USL last year; they picked out a few players from the CPL, so I think that’s a better showcase for me. But honestly, I’m concentrating on Forge. If playing for Canada happens it happens, but if not, it’s not a big deal.