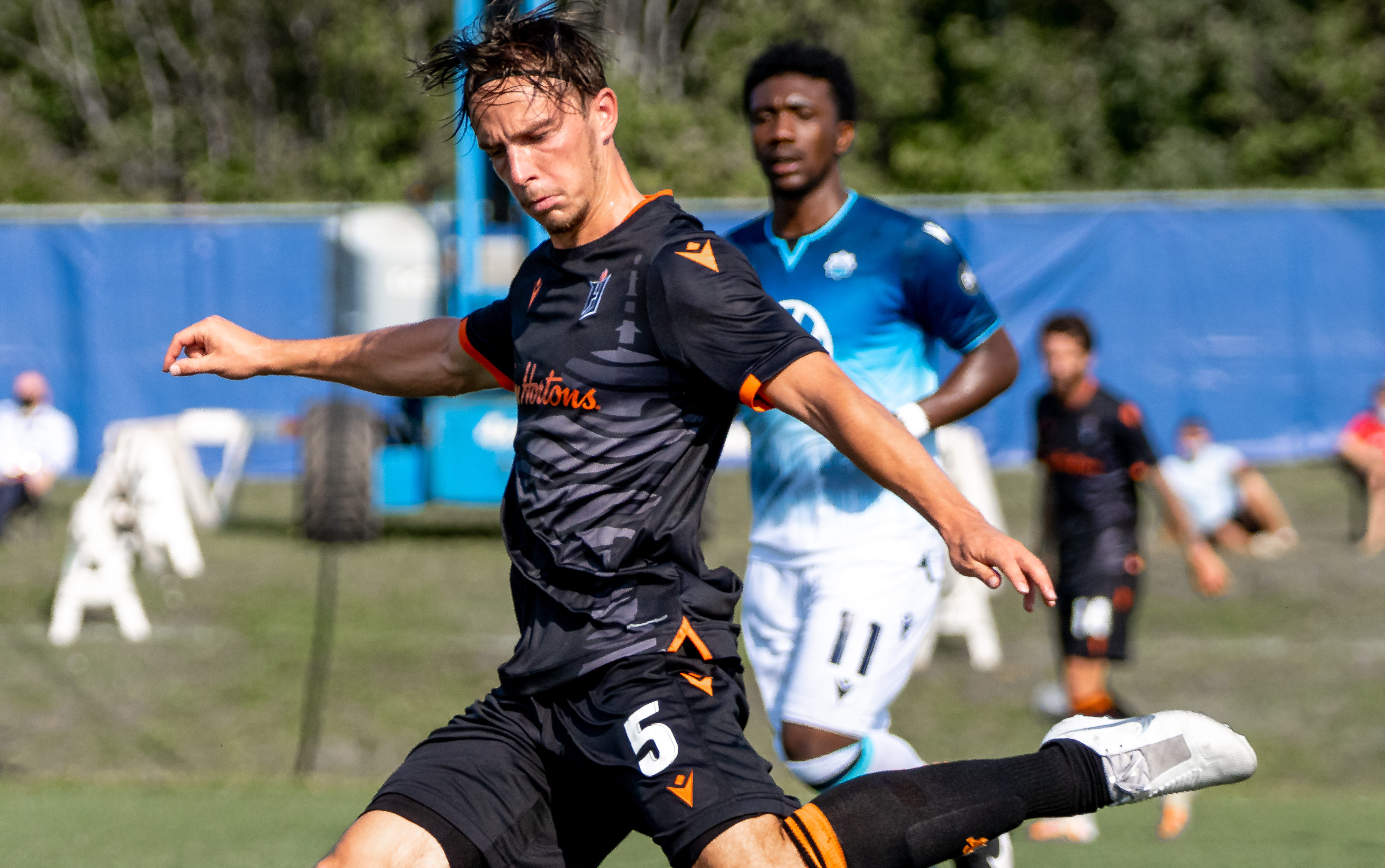 FC Edmonton didn’t have the greatest year in 2020, but their star attacker is still a bright spot. Ongaro scored three goals at The Island Games, meaning he has 13 in his career for the Eddies, which makes him the joint-all-time leading scorer in the Canadian Premier League (alongside Tristan Borges and Akeem Garcia).

Ongaro is one of the league’s most imposing presences in the box with his six-foot-six frame, but he also has the technical skills and hold-up ability to make him a true top talent in attack. Former FCE coach Jeff Paulus has called him “a rare talent,” and over a longer 2021 season he could make a serious Golden Boot challenge. Ongaro’s nose for goal and his intelligent attacking play earned him a place in the CPL’s “Next Gen” series, which highlights some of the very best young talent from across the league.

The Edmonton native also placed in the top five of six different ballots in Top 23 Under 23 voting.

Recently, Ongaro has taken his talents to Denmark, where he’s on loan with Vendsyssel FF; in the past few weeks, he’s found his goalscoring form again with markers in two straight games.

Few CPLers have been called a hero as many times as Choinière. The young Forge winger, plucked from the Montreal Impact academy, has a knack for scoring key goals — whether it’s Finals 2019 or the Concacaf League. He told CanPL.ca in November that, really, he just likes having the pressure.

Choinière scored a key goal for Forge against Atlético Ottawa in 2020, effectively sealing their passage to the second round in PEI. He also dished out one of the assists of the year (actually, according to the fans, it was The Assist of the Year) against Cavalry, with a pinpoint cross to Kyle Bekker.

The 23-year-old is one of the league’s most exciting young attackers, with his incredible ability to beat defenders on the dribble create scoring opportunities for himself and for teammates. Two voters put him in their top three, and it’s not hard to see why.

After a decent 2019, Pacific FC’s first-ever signing really broke out in 2020. He was dominant up and down the right flank for Pacific, showing balance between his natural attacking ability and a much-improved defensive game. Chung finished second in the CPL in successful tackles at The Island Games, landing in the top 10 for recoveries and duels won. He also had the second-most touches in the attacking third among defenders and the fourth-most crosses.

Chung’s excellent 2020 season turned a lot of heads around the country, and even started to generate a little buzz about whether he should be included in the Canadian national team’s Olympic qualifying squad this summer.

The 22-year-old also had a direct hand in one of the best moments of Pacific’s season, combining fluidly with Marco Bustos for an assist in the lead-up to the latter’s season-saving game-winner against FC Edmonton. Chung’s coach, Pa-Modou Kah, had a glowing review of his fullback as well.

“Everybody that’s not gonna come with the argument why Kadin Chung is the best right-back in this tournament, they don’t know football,” he said. “I think he’s on the doorstep to knock on the national team, because I want to see who’s a better right-back at this moment in Canada.”

Expectations were sky-high for Dunn coming into The Island Games. He joined Valour on loan from Toronto FC for this season, after the MLS side’s reserve team seasons were cancelled for 2020. He settled into the Valour side immediately, despite joining shortly before the club left for PEI.

Alongside centre-back partner Andrew Jean-Baptiste, Dunn helped boost Valour’s shaky defence from 2019 into one of the CPL’s most solid. He played every single minute for the Winnipeg club, rarely putting a foot wrong.

It’s not easy for a 20-year-old to play centre-back, especially at a new team, but Dunn needed no time to adapt. He was instantly in-sync with his more experienced teammates, and he was intelligent with his tackles and defensive battles.

Dunn returned to TFC after The Island Games, being named to the bench a couple of times as he looked to continue improving after impressing so much in the Canadian Premier League.

The Belgian defender gives @ForgeFCHamilton a 1-0 lead over @AtletiOttawa off a corner kick!

Is Forge’s Belgian centre-back the best defender in the CPL? Quite possibly.

Krutzen, who turned 24 years old on the day of the 2020 CPL Final, has been a stalwart presence at the back for the two-time champions for two straight years now. This year, he led the league in interceptions (34) and tied for first in defensive touches (87).

This season, Krutzen also provided some key attacking moments for Forge as a set-piece specialist, scoring a key header at The Island Games against Atlético Ottawa before burying two penalty kicks in the Concacaf League (including the 90th-minute winner against Tauro FC, surely one of the biggest goals in club history).

He played almost every minute of Forge’s 11-game CPL run this year, as well as every single second of their Concacaf League campaign. With defensive partner David Edgar now retiring, Krutzen will be counted on even more in the future to help maintain the club’s excellent defensive record.