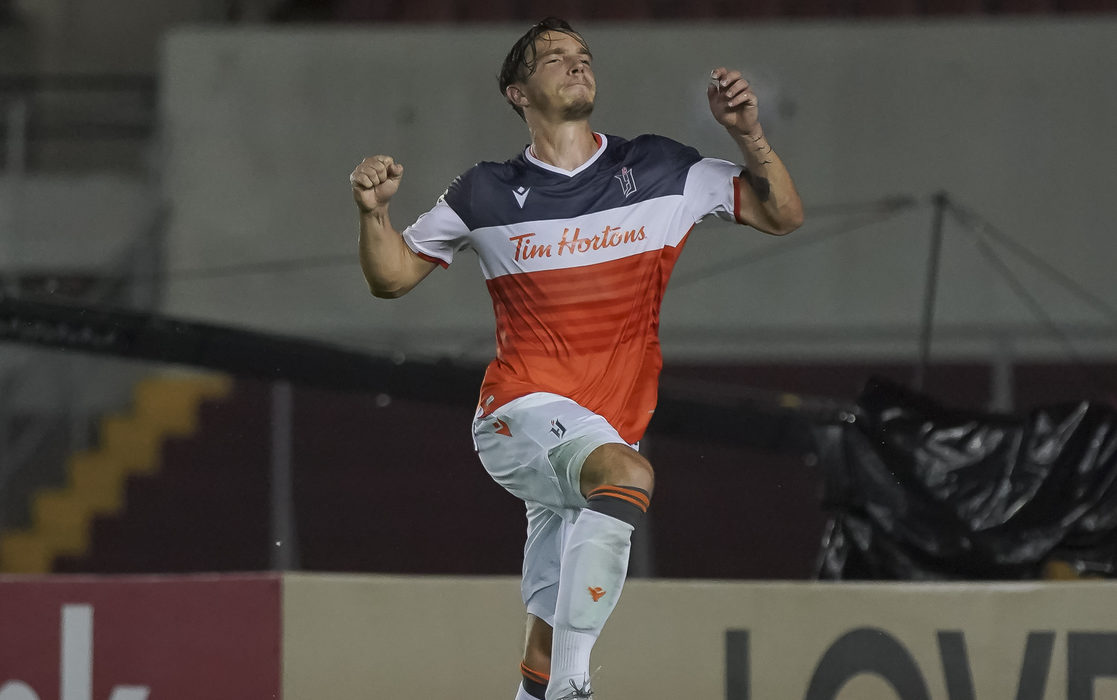 It was not a moment for the faint of heart.

Last Tuesday, with just a couple minutes left in the tied game, Forge FC won a penalty kick that could send them past Tauro FC in the Concacaf League, and into the quarter-finals. Surely, thought many, the Canadian side was about to win the game.

Of course, that is actually what happened. Daniel Krutzen stepped up to the spot and smashed it to the bottom left corner. Still, it wasn’t necessarily that simple.

The Belgian centre-back was tipped to take the kick from the very start of the game; apparently, Forge enters every match with a pecking order of possible penalty takers, and Krutzen typically sits atop it. Other candidates — like Paolo Sabak or Kyle Bekker, maybe — were on the pitch at the time, and the side would’ve been in good shape had the game needed a penalty shootout (which was about two minutes away). Forge stuck to their guns, though.

“Everything is pre-determined before the match,” coach Bobby Smyrniotis offered.

In such a high-pressure situation, it takes a lot of guts to take up the mantle and be the hero. The penalty spot, 12 yards from the goal, has made a fool of many a would-be hero before (just ask John Terry…). According to Krutzen, though, it’s best not to think about any of that. Just go hit the ball.

“It’s more just, step up and do it and don’t think about it too much,” he told CanPL.ca. “As soon as you start thinking that’s when you get in trouble. The key for me was to just step up, put the ball down, pick a corner and go for it.

“I picked my spot and just went for it, and hopefully it goes in.”

Krutzen said it was hard to describe the emotion after seeing the ball hit the netting, and hearing the final whistle just a couple minutes later. Clouded by adrenaline, it was a moment that Forge couldn’t quite appreciate immediately.

“I think right after the game obviously you’re excited, and happy that you just won the game, but you take it game-by-game in a tournament like that,” he recalled.

“But we’re a week later now and it’s kind of crazy how many people are basically telling you how massive this was, like just winning that game by itself means a whole lot for not only the club and the history of it but also for this whole country. The more time you get I feel like the more you reflect on what you’ve actually done as a team.”

Having now won three games in a row (albeit over almost three months), each of which could probably be classified the club’s biggest game of the year – a CPL Final victory, and historic takedowns of Municipal Limeño and Tauro, Forge’s confidence is sky-high. They’ve conquered the Canadian Premier League again, and they’ve made a real name for themselves internationally, all while playing some excellent soccer.

Is this the best version of Forge we’ve seen yet? Probably, according to Krutzen.

“We’ve definitely grown into something bigger and better over the course of the last two years,” he said. “We in the group have talked about the first three games of the CPL that we played, and that was last year, and if you think about that team that was on the field then, and the team that was on the field now, it’s just two totally different things. I think that everybody realizes we’ve definitely grown into a better playing team, and mentally a stronger group.”

Smyrniotis isn’t quite so sure, though. Most impressive accomplishments, yes, but he thinks Forge can aim even higher.

“To be honest, I wouldn’t say the last three games were the best football we’ve played. We’re playing football in spurts, we’re winning important games, but I think we can also be better,” he said.

“We’re going from the CPL Final, which I thought we were brilliant, and that was one of our best tactical matches in the way we just stuck to certain things and suffocated the opponent Halifax on that day … But then you look past there and you’ve got one month to prepare for a team where there’s a lot of unknown in Limeño. So you’re preparing, you’re training, you’re coming off of a big high of winning a championship and then all of a sudden it’s a dead period for at least two weeks until your brain and everything can kind of switch on.

“It hasn’t been an easy ride for the guys, hasn’t been a terrible ride at the same time. But all the stuff plays into a factor of how you prepare for a game. Now you look at our situation right now, going into what is again our next most important game.”

Regardless, Forge will definitely like their chances in the next round of the Concacaf League against Haiti’s Arcahaie FC on December 1st, especially considering how well they’ve performed under pressure recently.