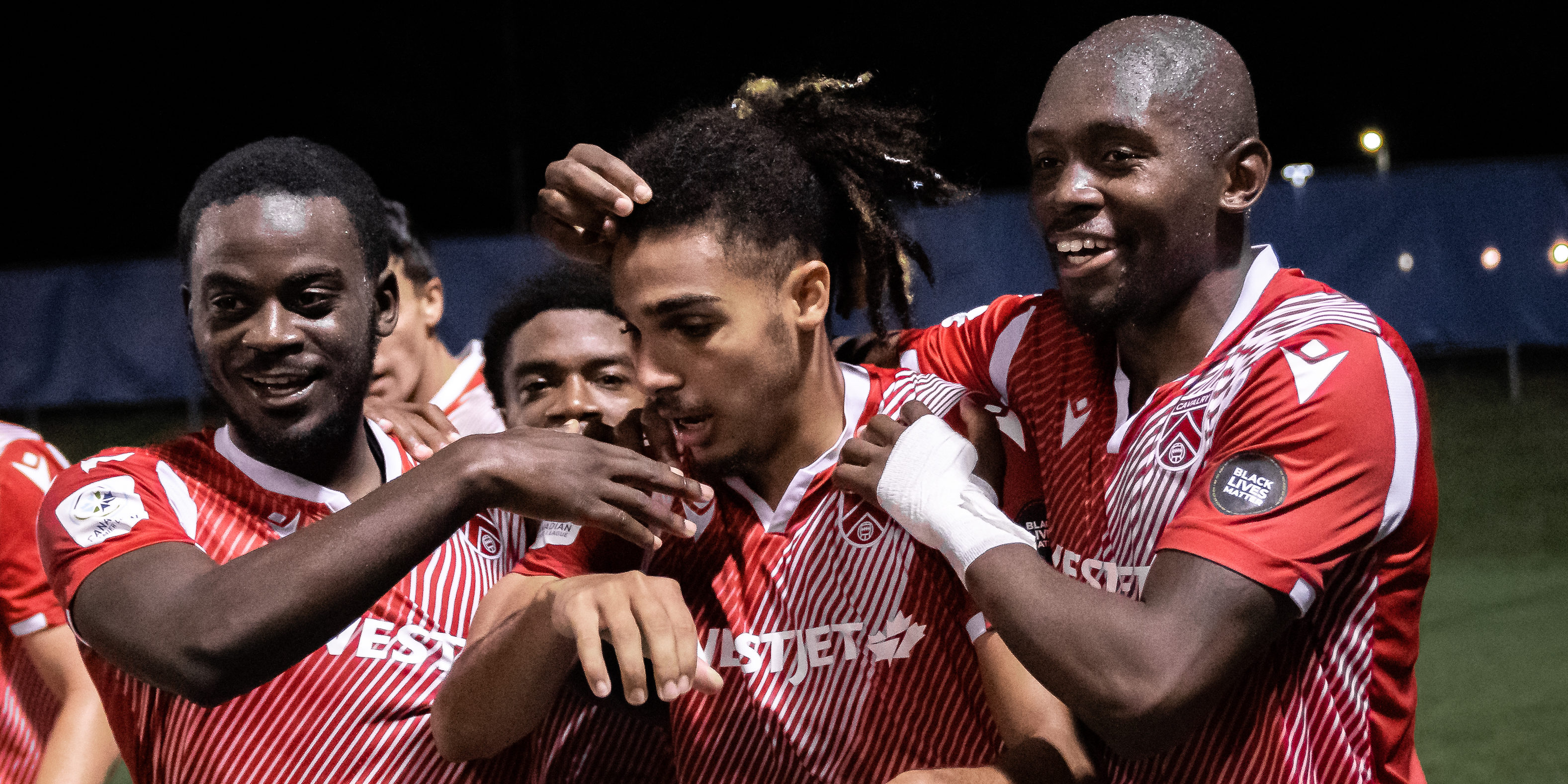 How will Cavalry FC’s 2020 be remembered? Was it a year of missed opportunities, or perhaps a campaign to be proud of considering the circumstances?

A bit of both, maybe? The Calgary-based club, one year removed from Spring and Fall season titles but also defeat to Forge FC in Finals 2019, entered the season hoping to establish themselves as top dogs in the Canadian Premier League.

That’s not quite how it worked out, though; their first round went well, and they topped the league after the first seven games, but defeats in a couple of close-fought group stage matches left them watching the Final from home. With a massive slate of injuries and a few unfortunate bounces, Cavalry left PEI wondering what could’ve been.

Cavalry began 2020 with eyes on building upon their regular season dominance from 2019. In the first few months of the year, they loaded up on new faces, poaching José Hernández, Elliot Simmons, and Bruno Zebie from other CPL clubs and adding some South American flair with Jair Cordóva and Richard Luca.

Those new faces, however, came at the expense of a few key contributors from the prior year; midfield maestro Julian Büscher had returned to his native Germany, Player of the Year nominee Dom Malonga left for Bulgaria, and breakout centre-back Joel Waterman had made a big move up to the Montreal Impact. Only time would tell how much those presences might be missed.

Like other CPL sides, the Cavs went through the cycle of self-isolation and a gradual return to training through the Spring months — making one more signing on the way, with Quebecois standout Mo Farsi joining the ranks in a move that flew under the radar at the time (not for long, though). When The Island Games were announced, Cavalry’s squad was pretty much set, although Luca and 2019 fan favourite José Escalante wouldn’t be joining them in PEI.

Cavalry added just one more name to the squad before leaving for Charlottetown: veteran striker Marcus Haber. Still, they arrived shorthanded; on top of the absences of Luca and Escalante, Hernández and Cordóva had picked up injuries in training just before setting off.

The 2020 season kicked off in kind with a heated rematch of Finals 2019, and it didn’t disappoint. Two slightly-refreshed Cavalry and Forge sides went toe-to-toe for 90 minutes, with the Cavs’ early lead quickly evaporating into a 2-1 advantage for Forge. As is often the case in games between these two, though, controversy was just around the corner: deep into stoppage time, Mo Farsi won his side a penalty for a… borderline handball decision, and Nathan Mavila scored it to bag a 2-2 draw.

“After ten months, to go out there and show character like that, was incredible,” defender Dominick Zator said of the result. “You could see it right off the bat – challenges were flying in – everyone wanted to show they’d get stuck in.”

The next few games were reasonably comfortable for the Cavs; they won three in a row, knocking down Valour FC, FC Edmonton, and HFX Wanderers FC in quick succession. Haber got off the mark with his new club quickly against Valour, as did Sergio Camargo — although the latter would go down to injury later in that game, ending his season and dealing the first of several crushing blows to Cavalry’s attack.

Farsi continued to impress with some excellent crosses and runs against both Valour and 10-men Edmonton, quickly emerging as the young player to watch this year. The Wanderers were a stiffer test, with the Stephen Hart-coached team offering Cavalry a little of their own high-pressing medicine, but Jordan Brown saw them through.

Injuries were starting to bite by that point, but Tommy Wheeldon Jr. had made do so far with some clever squad rotation and a few tactical shifts.

“I think what we’ve shown is we’ve got different layers to us,” the coach said after beating HFX. “But we’ve kept rotating the team, which isn’t always easy because you lose a bit of rhythm. But I think we’ve found a way to create the freshness against teams that perhaps have played a game less than us.”

The next game should, in hindsight, have been a warning shot. Taking on league newbies Atlético Ottawa, Cavalry allowed two quick goals around the hour mark and never recovered as the expansion side claimed their first-ever win and the Cavs were shut out for the first time in 2020. Of course, football took a back seat on that day, with players from around the league coming together to stand in solidarity against racism after the shooting of Jacob Blake sent ripples through the sports world.

The going got even tougher for Cavalry next time around, with captain Nik Ledgerwood joining the injury list for a matchup with Pacific FC. A couple of quick goals within the first half-hour were ultimately all the Tridents needed to hand Cavalry a second straight defeat (for the first time ever in a CPL regular season). Still, it wasn’t over yet; the Cavs remained very much in the hunt for the top four, with just one match against York9 FC remaining in the first round.

That first-round finale began with another blow to the Cavs, though; heart-and-soul winger Oliver Minatel got caught in a challenge with York’s Roger Thompson that broke his leg, sending him directly to hospital for surgery. With the incident casting a pall over the rest of the match, Cavalry found strength and rallied behind their fallen teammate to pull out a win — fittingly, Marcus Haber (who replaced Minatel in the game) scored the winner — and book a ticket to round two.

“Within the space of a week we went from being the best team, to ‘Oh my God, they’re not.’ Ranked seventh in the power rankings, questioned about that,” Wheeldon recalled that week. “And then suddenly you have a horrific injury like that to a terrific young man, and the players come in at the water break and say, ‘Let’s effin’ win this for Oliver.’ And as soon as they said that, their mindsets shifted. They’re new beasts.”

With all said and done in the first round, Cavalry came out on top, securing first place despite the losses and injuries. They forged — err, sorry, stampeded? — into the group stage, with Wheeldon calling on his shorthanded squad to adopt a “win at all costs” mentality heading into their second-round opener against Pacific.

They got their revenge against the Tridents, returning to their trademark high-pressing style to win 3-1. Farsi treated fans to another moment of magic, with a strike that would ultimately be voted the El Jimador Shot of the Year by fans, as Wheeldon’s side edged closer to what he called “the best version” of themselves. Like their previous win, however, this was yet another Pyrrhic victory for the Cavs: yet another key attacker, Nico Pasquotti, had his season cut short, with what would ultimately be diagnosed as a torn ACL.

The Cavs limped into their second fixture, missing Pasquotti, Minatel, Ledgerwood, Camargo, and Hernández, with a number of other key pieces fighting through knocks as well. The contest with HFX Wanderers was, ultimately, a calamity; Jonathan Wheeldon was ejected for a second yellow card in the 11th minute, and two first-half penalties gave the Wanderers a safe 2-0 lead by the interval.

Cordóva made it respectable in the end, but a game where the Cavs were forced to draft in team manager Tofa Fakunle as an emergency substitute was always going to be an uphill battle.

A win in the next one against Forge (who by then had already guaranteed their own spot) would still have put Cavalry in the Final, but the eventual champions managed to break the Cavs’ man-marking once with a brilliant Kyle Bekker pass, before defending flawlessly to see out the clean sheet.

So, Cavalry departed the Island Games with a third-place finish in the second round, of which — all things considered — Wheeldon was quite proud.

“They’ve gone injury after injury, we’ve got five players out, and they’ve just kept on going, going, and going,” he effused. “What we lacked in quality we made up in attitude and a refuse-to-lose mentality. Sometimes you just run out of time, and that’s that’s how I feel. They would have kept playing until midnight, and the boys would have had to be dragged off.”

In the months since that mid-September exit, Cavalry has been busy with player movement. A few fan favourites have moved on — year one veterans Nathan Mavila, Jordan Brown, and Niko Giantsopoulos parted ways with the club, as did Marcus Haber — and a couple exciting new pieces have come aboard (most notably, former York9 stalwart Joseph Di Chiara).

We may see a slightly different look to the Cavs in 2021, as they seek to get a little younger while upgrading to return to title contention next year.

As 2020 draws to a close, fans in Calgary will surely be more eager to jump into the future than to ruminate on the season that was. Still, their second season was full of memories and magic moments.

The Albertans experienced highs and lows this year, none of which will soon be forgotten.

Cavalry stumbled in the second round, with injuries overtaking their North Star Shield aspirations. Here’s how their 2020 looked, by the numbers:

“All these (injuries), if that happens to any team you’re not even getting past round one. So for the players to keep going, and even as a staff and as a group we felt, with what we had left, because we’ve got some depth, we could still go again. But we were one goal or one win in two games from getting to the final, with a severely depleted squad… It felt like near the end we were taking a knife into a gunfight.” – Cavalry FC coach Tommy Wheeldon Jr.

“At times you do feel like it’s a massive world, and you’re not understood. You feel like no one understands what you’re going through. And to be honest, no one will ever understand. But to be honest, the fact that you’ve got support helps. The fact that this morning, all the players got together, met up with the commissioner (David Clanachan) and really said what was in their hearts. We’ve done something that was so powerful, and I couldn’t be more proud of the players and the league.” – Cavalry FC defender Nathan Mavila

“The leadership group of this team, your Nik Ledgerwoods, Jonathan Wheeldons, Mason Traffords, Marco (Carducci), Elijah (Adekugbe), they just talked about it prior, and said, ‘Leave your clothes on the hangers. We’re not going home.'” – Tommy Wheeldon Jr. on Cavalry’s season-saving win vs. York9

The Cavs rally for fallen teammate Oliver Minatel, with a winner from Marcus Haber against York9.