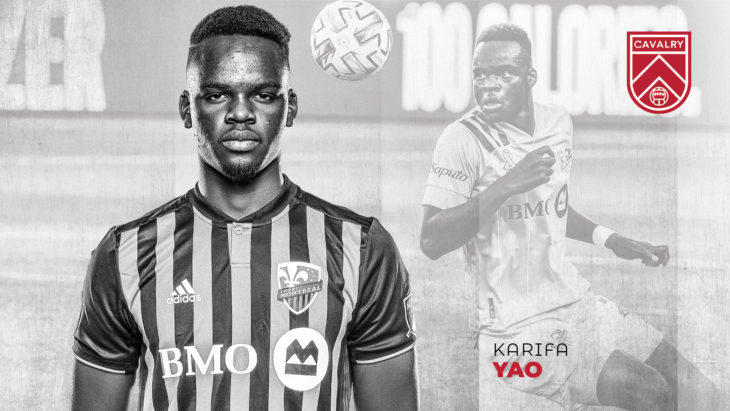 Cavalry FC added another defender to its ranks on Thursday, announcing that the club has acquired defender Karifa Yao on a season-long loan from MLS outfit Club de Foot Montreal.

Yao, a 20-year-old centre-back, signed a professional contract with Montreal (then the Impact) in 2019, and he went on to make two MLS appearances during last season. Coincidentally, he made his professional debut in September, entering a match against the Philadelphia Union as a substitute for former Cavalry defender Joel Waterman.

A Montreal native, Yao had been in the club’s academy since 2017, having previously played at the amateur level for local Laval side Étoiles de l’Est. He has also had brief experience with Canada Soccer’s youth structure, attending a men’s under-17 camp in 2017 (alongside fellow Cav José Hernández), as well as a under-15 camp two years prior.

In 2019, Yao was named to the provisional roster for Canada’s under-23 squad, which is expected to compete for 2021 Olympic qualification later this year.

Cavalry is rebuilding its defence this off-season, with past stalwart centre-backs Dominick Zator and Jay Wheeldon both leaving. The club has so far brought in younger replacements for the backline, with Yao joining 22-year-old Dutch defender Daan Klomp.

“We looked at Karifa last year when we sold Joel Waterman to Montreal, but given they had a new manager (Thierry Henry) it was only right he stayed for the 2020 season,” Cavalry coach Tommy Wheeldon Jr said.

“He’s a powerful and athletic centre-back that is very imposing on the ground or in the air. He also has a good technical base that will help us in our possession game too. We believe Karifa is a great signing for our squad as we evolve into a younger and even more dynamic team for 2021”

With this announcement, Cavalry now has 16 players signed for 2021. Yao is the seventh newcomer to the side so far, joining incoming Canadians Joseph Di Chiara and Tyson Farago, as well as a strong cast of new internationals.

Alongside Hernández, Yao will likely help Cavalry fulfill its under-21 minutes requirement in 2021, with the threshold having been increased to 1,500 total minutes.