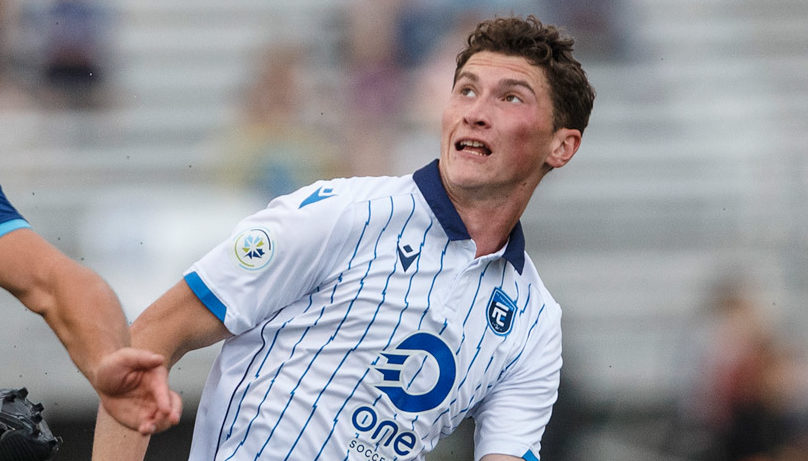 FC Edmonton fans will get to see a lot more of Easton Ongaro for the foreseeable future.

The Eddies announced on Tuesday that they have signed Ongaro to a new multi-year contract, thus ensuring the return of their top scorer for the 2020 CPL season.

Ongaro, a 21-year-old native of Edmonton, enjoyed a breakout 2019 campaign with his hometown club by tallying a team-high 10 goals, which was good enough to finish fourth in the league’s overall scoring race. He also collected two assists.

“It means everything to stay with Edmonton and continue to play in front of my family and friends,” Ongaro said.

“I grew up playing here from the youth level to the post-secondary level, and I got my first professional contract and minutes here in Edmonton.”

Incredibly, Ongaro didn’t even start a game for the Eddies until the Fall season. He suffered a broken hand in training during the Spring campaign, limiting him to just 95 minutes of playing time.

Not lacking in confidence, Ongaro was already talking about winning the CPL goal scoring race in 2020 after finding the back of the net in FCE’s 3-1 loss to York9 FC on Sept. 21.

“Hopefully it’s something that continues over the last few games here and, definitely next season, I think I’ve got to have my sights set on the scoring title,” Ongaro said at the time.

Beyond his goal-scoring prowess, Ongaro was noted for using his six-foot-six frame to great effect, and was called the soccer version of former Edmonton Oilers great Ryan Smyth on account of his ability to get in front of the net and score from close range

A product of the University of Alberta, Ongaro led the Canada West division in scoring in 2018, bagging 16 goals in 14 games for the Golden Bears. He was selected 15th overall during last year’s CPL-U SPORTS DRAFT by Cavalry, but he was later released by the Calgary-based club and he signed with FC Edmonton in May.

Ongaro made his CPL debut on July 27 in a 1-1 draw against Forge FC, marking the occasion by scoring the tying goal in the 89th minute.

#FCEd is delighted to introduce our latest addition to the 2020 Squad! #OneOfYourOwn #CanPL

Goals coming to a stadium near you.

Soccer runs in the family, too.

Ongaro’s uncle, Ross, featured for the Edmonton Drillers in the old North American Soccer League, while two cousins, Jordan and Justin, played NCAA soccer. Jordan was selected by the Montreal Impact during the 2014 MLS SuperDraft, and played for Canada’s U-17 and U-20 teams.

It wasn’t all smooth sailing for Ongaro. He was used as a substitute and he was deployed out wide, rather than play centrally, as coach Jeff Paulus switched to a 4-3-3 formation for a pair of games late in the season.

Still, Paulus commended Ongaro for the way he handled himself during that time, and the FCE coach has lauded the return of his star attacker, believing Ongaro has the talent to become the best striker in the CPL.

“It’s a massive signing for both the club and Easton,” Paulus said. “He gets to continue to develop at home, where he has people who care about and support him. For us, we have a natural goal scorer. He is a player who has the ability to be in the right place at the right time.

“He’s also a unique individual because he possesses great height, but he’s got great feet and exceptional pace. He is a rare talent and he will certainly help us achieve our goals next season and we’ll help him achieve his.”