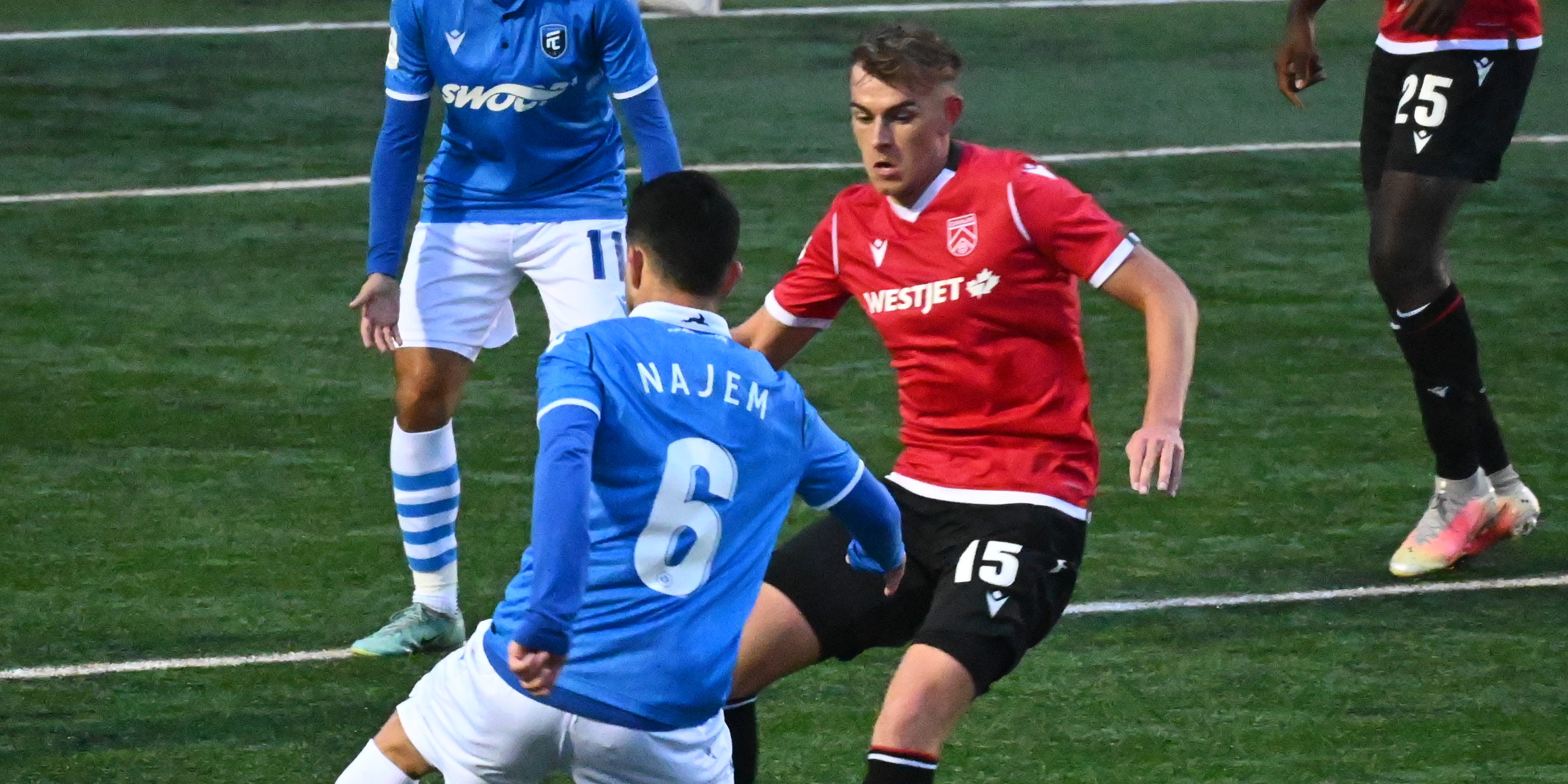 On a wet, windy night at Clarke Stadium, Cavalry FC got the better of provincial rivals FC Edmonton on Wednesday thanks to a goal by Anthony Novak midway through the first half. Although the Eddies pushed hard for an equalizer, playing much of the second half on the front foot, the final ball continued to elude them as the Calgarians ultimately held on to take all three points.

After giving Cavalry a lot of space to move the ball on Sunday, the Eddies pressed their rivals a lot harder on Wednesday night. Easton Ongaro, as a lone striker once again, covered plenty of ground trying to make life difficult for the Cavalry centre-backs, with Azriel Gonzalez coming in to help from the left wing quite frequently. That caused some more trouble for the Cavs than they had to deal with in these teams’ previous meeting, and as a result Cavalry had fewer options in playing out of the back — right-sided central defender Karifa Yao made far more passes than his partner Mason Trafford, with the Eddies pressing one side more than the other at times.

With Edmonton winning 52.6% of the duels, and limiting a Cavalry team that’s usually very accurate to 78.6% pass success (although the rain might’ve lent a hand), they certainly put more pressure, and it translated into more Edmonton possession in the Cavalry half. In fact, 32.3% of the match took place in the Cavs’ defensive third (compared to 18.1 in Edmonton’s). However, they just weren’t able to covert those chances into goals.

Though the hosts outshot Cavalry 16-8, they’re the ones going home empty-handed. As a result, coach Alan Koch was frustrated postmatch, having seen his side play as well as it did without being rewarded; he revealed that, 10 minutes after the final whistle, hardly anything had been said in the Eddies’ locker room after such a disappointing result.

“When I watch the game again, which I’ll do when I get home tonight, I’m pretty certain I’m gonna see a team that was better than the other team,” Koch told reporters. “Cavalry are at the top of the league, and we’re down near the bottom of the league, but it didn’t look like that for the majority of the 90 minutes tonight… We deserved to get something out of the game tonight, so I’m very disappointed for our players because they left everything they have out on the pitch; you can see how much they care, how much they’re playing for each other.”

There’s plenty to be proud of for the Eddies in that game, and despite the loss it may have been one of their better performances in recent weeks considering how much they played on the front foot. Still, it’ll be deflating to come away with nothing from such a good performance.

After scoring twice on the weekend with Joe Mason starting up top and Sergio Camargo playing as a second striker, Cavalry went with a very different attacking look for this reverse fixture. Tommy Wheeldon Jr. opted to put both Anthony Novak and Ahinga Selemani out as forwards, with Jose Hernandez and Richard Luca playing on the wings of what looked from the off like an extremely attack-minded lineup.

Despite the Eddies having far more chances in this game, Cavalry did look very dangerous going forward when they found their groove in moments. Particularly in the middle of the second half — near the phase where they scored — they showed good combination and quality to get past defenders and cause problems. Novak himself, the goalscorer, had two shots and two key passes, and Luca found four shots of his own — although a couple were from significant distance.

With so many other talented attackers on the pitch, Novak was perhaps able to put his strong hold-up ability to better use, looking for the ball to come into his feet before laying off to other goalscoring threats. Cavalry’s front four weren’t particularly aggressive in their pressing this game, so instead they looked to attack mostly with more methodical buildup play out of the back, but it was a good exercise for the new-look front four to manage a difficult match, especially with the wind and rain coming toward them in the second half.

“Richard Luca hadn’t played for a while, nor had Jose Hernandez, nor had Selemani,” coach Tommy Wheeldon Jr. explained. “It was a good chance to put them in really tough conditions, and if Selemani had scored just before halftime — in training, he’s been hitting those clean — we’re 2-0 at the break. I thought we could’ve offered a little bit more in the first half when we had the wind and rain, it would’ve made things a lot easier, but in the second half we had a nice breakaway with Richard Luca from a tight angle and then after then it was just a case of how we managed the game because it didn’t seem to be sticking.”

Alan Koch said after this game that his side had thrown a “barrage” at the Cavalry defence — and indeed they did, with their 16 shots (11 from inside the box). However, Cavalry may have shown part of why they’re consistently near the top of the CPL by holding firm and finding a way to scrape out the result away from home. They certainly needed help from Marco Carducci, whose seven saves really did preserve the win for his side, but the Cavs’ backline did also do a good job for long stretches at preventing Edmonton from having too many options in attack.

The Eddies’ attackers were relentless with their running — Easton Ongaro, Azriel Gonzalez, and Jeannot Esua in particular — but Cavalry actually did well for the most part to keep up. Karifa Yao deserves particular credit: as the more mobile of the two centre-backs for the Cavs, he made it very difficult for Edmonton to break through on his side of the pitch, forcing them primarily to look for opportunities in the opposite half-space.

Yao’s (deep breath) four tackles, six clearances, three interceptions, 96 touches, 10 duels won, 69 successful passes, and 94.5% pass accuracy were all most on his team, on a night where he did an incredible amount of defending against a team bearing down on him relentlessly. Wheeldon agreed, as well; he pointed out that, although the Eddies had thrown quite a lot at them, the Cavalry defenders had done quite a good job on the whole.

“It’s wave after wave, we knew it was gonna come in from (Edmonton),” he said. “Edmonton’s a tough group to play against, they’ve got a few experienced players in there. Easton Ongaro’s got size and height. But I thought the backline was just incredible. Karifa Yao, another great game, Marco Carducci’s save at the end is superb to protect the three points. Sometimes you just have to defend, but it’s nice to keep another clean sheet.”

Cavalry showed some resilience to pull out this win, demonstrating they’re able to find results in a litany of different ways thanks to the depth and tactical versatility of the squad.

The 2019 Goalkeeper of the Year put in perhaps his finest performance of the 2021 season in this match, making seven very good saves (including a spectacular double stop on the very last play of the game) to keep the clean sheet against an Eddies side that was hunting ruthlessly for their goal. He said postmatch that the final save he made was “a blur” with the rain coming right into his face, but he put himself in good position to make stops all night.

Both sides will be right back in action this Saturday, September 4. Cavalry will remain on the road, heading this time to Winnipeg to take on Valour FC at IG Field (6:30 pm ET/5:30 pm CT), while FC Edmonton stay at home to welcome Pacific FC to Clarke Stadium in the ComeOn! Match of the Week (9 pm ET/7 pm MT). Watch all matches live on OneSoccer.
© 2022
Canadian Premier League
Read our privacy policy.