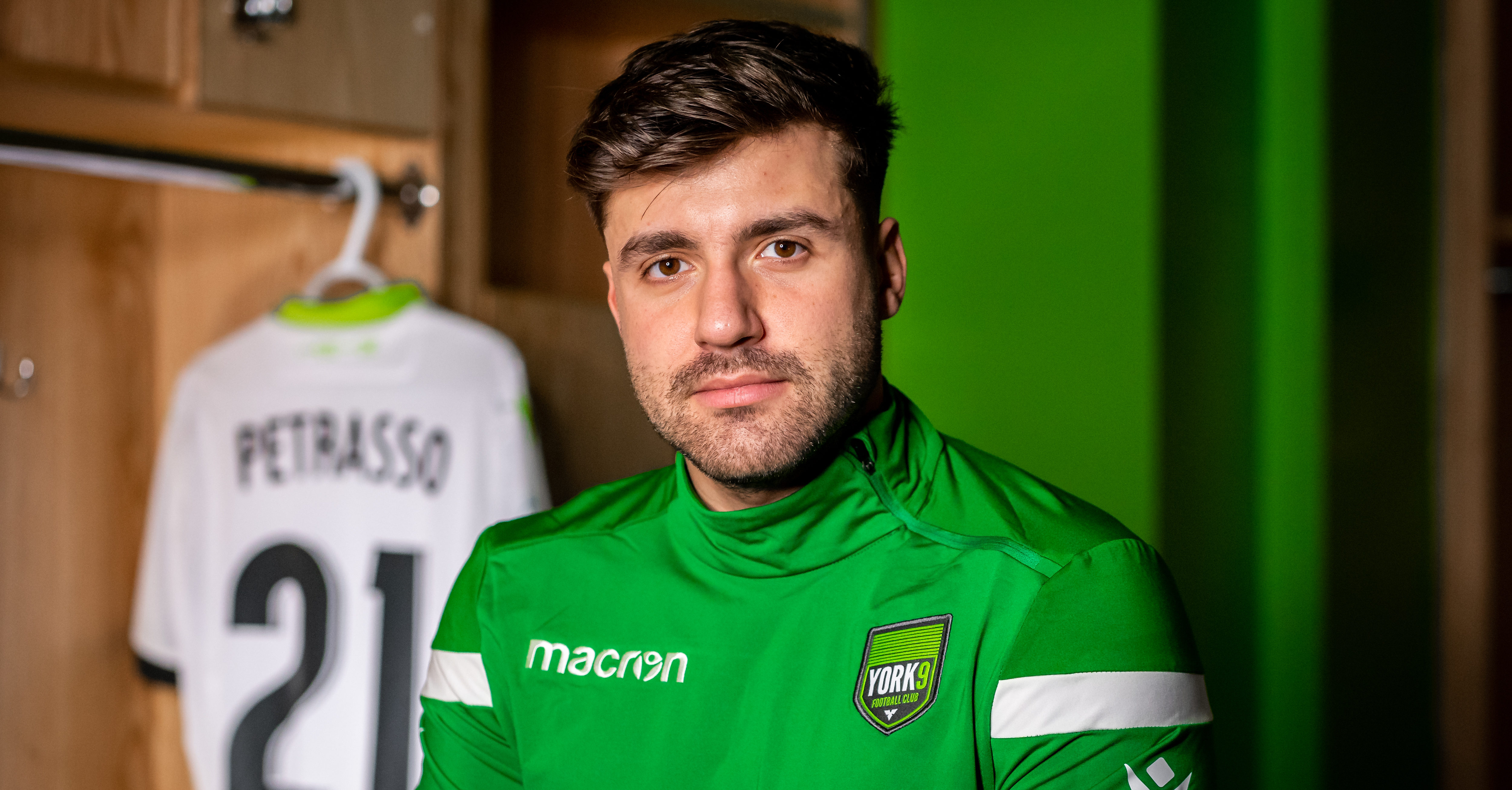 It’s a theme that many CPL players experienced in Year 1. The opportunity to return home from pastures far and away, to play in front of friends and family back in Canada, back where it (probably) first started.

Michael Petrasso got a taste of that return, too.

But only a taste.

See, where others such as Dylan Carreiro or Marco Bustos returned to their native Winnipeg to play for Valour FC last year, Petrasso joined Rob Gale’s outfit and immediately circled his team’s visits to York9 FC on the calendar. The Woodbridge, Ont., native would have to wait for road trips on away days to experience his homecoming.

Now? The newly-minted York signing is ready to play for coach Jim Brennan and bring his career back home, having joined York9 FC ahead of the 2020 CPL campaign.

“I’ve been away nine years now, since I’ve been home,” Petrasso told CanPL.ca, after signing for the club. “I moved out at the age of 15 to play football abroad (with Queens Park Rangers in England). It’s been a long time coming.”

He added: “Coming to the CPL last season, all expectations were very high. After seeing the league and seeing all the players that have come into the league and grown out of the league, I think this league is very good for showing off your talent.

“But after the season finished, York9 was my number one choice. I watched them play and they’re a good football team. Even when I came to play here away, the first time, my whole family had (booked) the big tent behind the goal and I felt local support from my family. It was my main target to come back and play here. I spoke to Jimmy on the phone, and he’s very ambitious about winning the league. I want to be a part of that and play my role. I’m happy to have joined.”

Petrasso is one of many York Region and Toronto-based players who now call York9 home. He’ll be reunited with childhood friends and former teammates Luca Gasparotto, Manu Aparicio, and Chris Mannella, each of whom he has remained in close contact with over the years.

The 24-year-old attacker speaks highly of soccer in York Region, and for good reason. Since his very start with local junior club Kleinburg Nobleton SC, to his time in Markham, and finally, through his years at Woodbridge, he’s had a friendly face guiding his career. His father, mother, and uncle were all coaches in Ontario youth soccer programs, and he played for each of them throughout the years, before making the move across the pond to join QPR at age 15.

Every kid who grew up in Woodbridge has a story about Colossus Cinema or Dave and Busters, two popular hangouts. Petrasso is no exception. In fact, those childhood memories, coupled with a history of far-too-short visits back, made his move to York9 an easy career decision.

“I’ve come home a couple times, but you always come home with the feeling that you’re about to leave in a month, so you kind of rush everything as you try to spend time with certain people,” Petrasso offered. “Now that I’m home home, I’m just enjoying time with my family, and not being upset that I have to leave in a week.”

And, on top of that, Petrasso is also enjoying training sessions with his old friends, guided by the hand of another man with plenty of English footballing experience in Brennan.

“I know Jimmy’s career. He’s had a fantastic career, so learning from him, I trust him, because I’d love to achieve a career like his,” Petrasso said. “The way I play is fast and counter-attacking, and Jimmy, his style of play is to be very possession-based but then they threaten and go forward fast. I can fill in well and I’m looking forward to what he has to teach me this year.”

He added: “Playing as an attacker (last season for Valour), it was hard to break York9 down. I know Jimmy has got real ambitions to compete with the top two this year. After hearing about it and talking about it, I think I can come in and hopefully help fulfill that.”

Though he has plenty of experience himself, Petrasso is, self-admittedly, not the loudest voice in the locker room. He’s a reserved type, “shy” as he describes himself, but a “joker on the field” who instead leads by example. Last season, Petrasso played a key role in the Valour attack, with six goals in 20 total appearances from various positions in Gale’s lineup.

With a full season of CPL action under his belt, Petrasso is ready to take on the challenge once again in 2020 – and be an example for his community – back where it all began.

“Having this league come in and having a team literally right on my doorstep shows that soccer is growing in Canada,” Petrasso said.

“Especially for all the kids that play in (places like) Woodbridge and Kleinburg and all these local community teams, it gives them a really good goal, because you can actually play professional soccer just outside your doorstep. We’re major influencers on that, so I’m happy to be a part of it. Hopefully I can show my talents this year and help this team grow.”

And, of course, he’ll carry his time in Winnipeg with him throughout the rest of his career, too.

“My 2019 season with Valour was amazing,” Petrasso concluded. “It was my first time in Winnipeg, and they welcomed me in. The fans there were incredible. Going into that first game, our home opener, we had 10,000 people, and you can just feel the vibe, the culture in the city brings it for soccer. It’ll be a great place for soccer to grow.