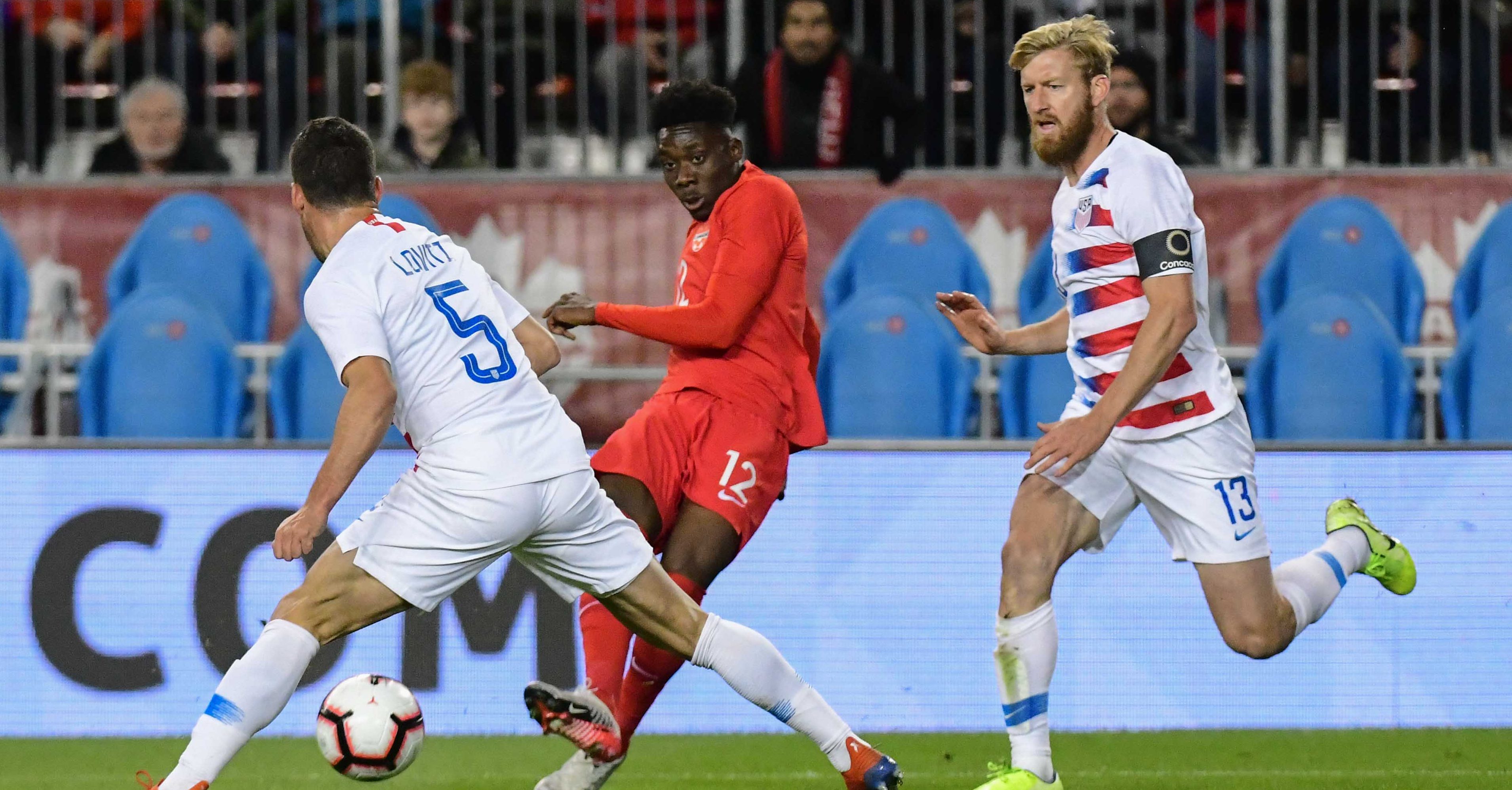 TORONTO – It was a result 34 years in the making.

The Canadian men’s national team wiped away a history of more than three decades of futility against the United States, earning a comprehensive 2-0 win over the Americans on Tuesday night in Concacaf Nations League play before an announced crowd of 17,126 jubilant fans at BMO Field.

Alphonso Davies and Lucas Cavallini were the goal-scoring heroes for Canada, who notched its first victory over the U.S. since April of 1985.

The Americans had gone 9-0-8 versus Canada since suffering a 2-0 defeat in Vancouver some 34 years ago. But a new chapter in the one-sided history of this rivalry was authored on Tuesday night, with Davies, the young Bayern Munich star, leading the charge for what is easily the most dynamic and dangerous Canadian men’s team assembled in quite some time.

Canadian coach John Herdman heralded his players for their Herculean efforts in earning this historic win, while also suggesting this was also a preview of things to come from the Reds.

“It’s only one step. It’s only one little drop in the ocean of what I’m hoping for this team. There’s more to come,” an emotional Herdman promised to reporters in the post-game press conference.

How big of a moment was this for Canadian soccer? Big. Not only does it increase Canada’s chances of making “the Hex” in World Cup qualifying – something it hasn’t done since 1997 – but Les Rouges now stand poised to compete in the Concacaf Nations League finals.

Canada tops Group A with nine points, ahead of the U.S. (three points), who has played one fewer game. These teams will meet again on Nov. 15 in Orlando, and Canada can clinch first in the group and move on to next summer’s tournament final with a draw.

More than that, though, this was a statement game, the final result giving hope to legions of long-suffering soccer supporters that there is genuine hope for the future, after plenty of previous false dawns and one failed World Cup qualifying campaign after another.

“We made history tonight, but our job is not done. We play them again next month, so our focus is (on) if we can repeat what we did tonight again in November,” cautioned Davies, who stated his game-winner was the biggest goal of his career.

He later added: “It’s a statement for Canadian soccer, because we know we have good players on this team. … We showed it tonight.”

While Davies’ goal was the major taking point, there was plenty of other things to like from Canada on Tuesday night, including the contributions of the team’s depth players. Clearly, Canada’s fortunes don’t rest squarely on the shoulders of the Bayern Munich star, who was given license by Herdman to follow his attacking instincts against the U.S.

“For (Davies), it’s just about going out there and playing, son. Go do your thing. I saw that tonight. …. He was free tonight, and it was lovely to see. I also think the competition in that squad now, he can’t sit on his heels. We had Cavallini and (Junior) Hoilett on the bench, and we’ve got young (Jonathan) David. It’s really competitive and exciting,” Herdman said.

American coach Gregg Berhalter credited the Canadians for the quality of their performance, while also stating the home side showed a greater will to win than his team.

“When I look at the game … the first thing that stands out to me was desire – the desire of Canada. Give them credit, but having said that, the minimum we expect is to match that, and we need to compete on every single play in games like this,” Berhalter stated.

“I wasn’t happy with the desire that we displayed tonight.”

Canada deployed a compact 4-2-2-2 formation, with Mark-Anthony Kaye and Samuel Piette at the base of the midfield, Scott Arfield and Jonathan Osorio more advanced, and teenagers Jonathan David and Davies leading the line up front.

Herdman was forced to make an early changed after Kaye limped off field in the sixth minute while clutching his hamstring. Liam Fraser made his national team debut in subbing in for Kaye, and he hardly looked out of place in the heart of midfield while competing against his mentor and TFC teammate Michael Bradley.

Canada is 75th in the current FIFA rankings, well below the U.S. (No. 21). But you never would have guessed the gap was so large based on the way the Canadians outplayed the Americans on this night.

The dynamic duo of Davies and David used their speed and quick movement with the ball to cause plenty problems for the U.S.’s defence in the first half, but their finishing left a lot to be desired. Davies could only muster tame shots on target, while David squandered a glorious chance after bearing down on goal, pushing his rebound attempt wide of the far post after being stopped by American goalkeeper Zach Steffen.

After being outplayed through the opening 45 minutes, the visitors came out stronger at the start of the second half. Christian Pulisic broke through the Canadian defence and forced goalkeeper Milan Borjan to make a two-handed save from close range.

After weathering a bit of a storm, the home side broke the deadlock. Fraser played a pass into the box to Arfield, who then delivered a great ball to the back post where Davies fought off two American players to bundle it home.

Both Davies and David were subbed out moments later, replaced by Hoilett and Cavallini.

Canada continued to apply pressure on the Americans and the levee broke in injury time when Cavallini latched onto a ball played over the top before burying a low drive past Steffen.