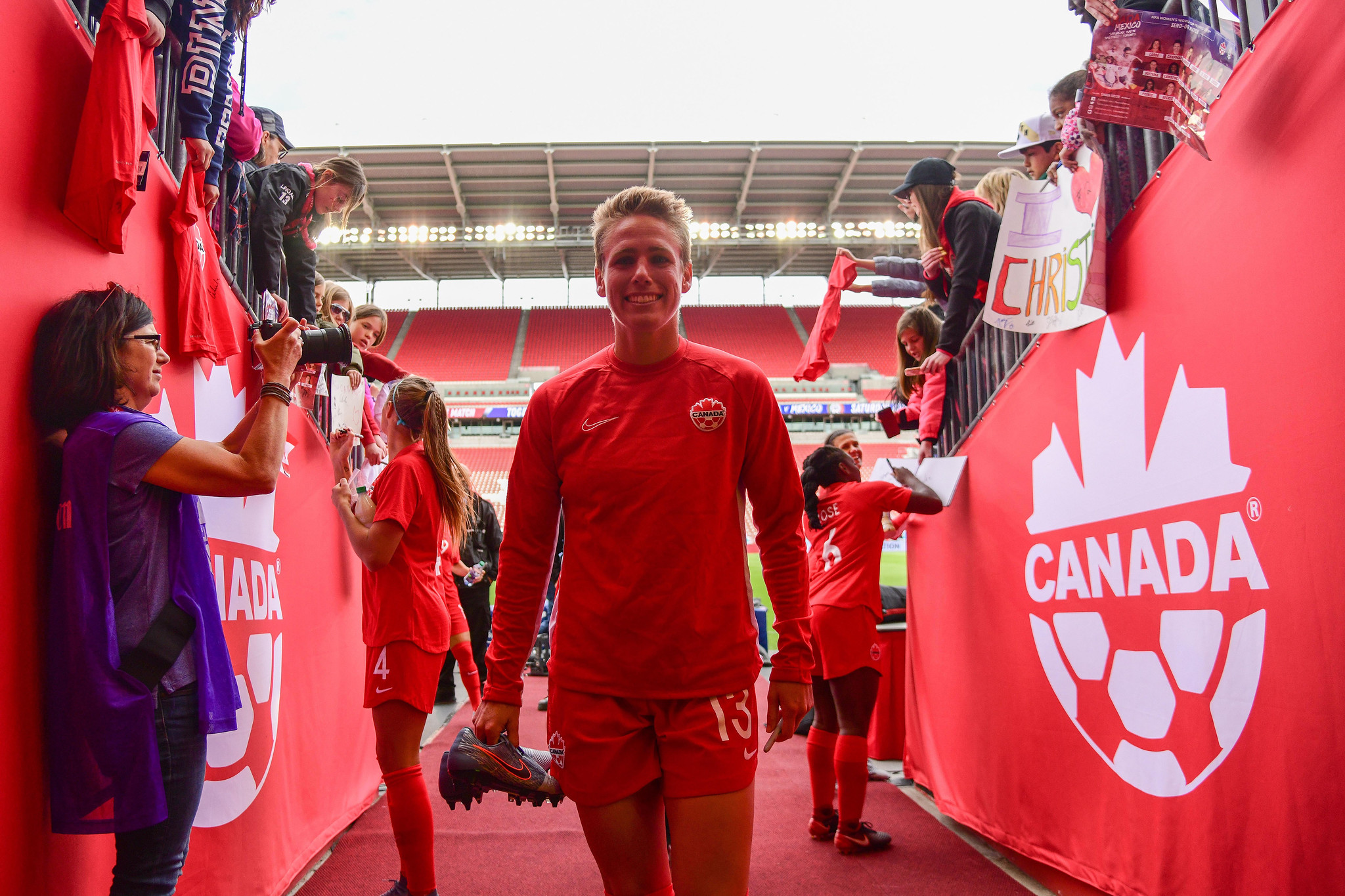 The Canadian Premier League announced on Saturday that they will be starting the 2021 season in Winnipeg, Manitoba.

Winnipeg has a rich soccer history, with representatives from the city winning the first three Canadian Challenge Trophies (an amateur predecessor to the Canadian Championship, still played to this day) from 1913-1915. With Valour FC in the CPL, FC Manitoba in USL League Two, and several youth teams producing talent, the future of soccer in the city is just as bright.

Plenty of Canadian soccer players have come from the city, and here are ten of the best.

As a member of the Canadian women’s national team for more than 15 years, very few Canadians have achieved more than Sophie Schmidt on the international stage.

Schmidt, who made her senior national team debut back in 2005, is one of just three players in program history to pick up over 200 caps, and she was a part of both Canadian teams to win Olympic bronze medals — in 2012 and 2016 — as well as a gold medal at the 2011 Pan American Games.

At the club level, she played with the Vancouver Whitecaps from 2005-2010 (and the University of Portland Pilots from 2007-2010), before stints on both sides of the Atlantic. After the Whitecaps she played with magicJack in Women’s Professional Soccer (WPS) for a season, followed by six games in Sweden with Kristianstads DFF. She also played in Europe for three seasons with FFC Frankfurt in between stints in the NWSL — with Sky Blue FC (now known as Gotham FC) from 2013-2014 and the Houston Dash from 2019 to present.

She scored a penalty in the 2020 NWSL Challenge Cup final, helping the Dash win their first trophy.

Current Pacific FC attacker Marco Bustos has established himself as one of the best players in the CPL since joining his hometown club Valour FC for the 2019 season.

He played for Winnipeg club FC Northwest during his youth career before moving to the Vancouver Whitecaps academy system. There, he’d work his way up to the first team, making four appearances, but mostly featuring with Whitecaps 2. He had brief stints at Atlético Zacatepec in Mexico and Oklahoma City Energy in the USL before returning to his hometown in 2019.

After impressing with Valour, he moved to Pacific FC ahead of the 2020 season, a season during which he emerged as a Player of the Year candidate and a premier attacker in the CPL, scoring five goals in 10 matches. He’s among the favourites for the Player of the Year award in 2021 (at least according to the CanPL.ca staff), and could have a monstrous year with Pacific.

He has also made six appearances for the Canadian men’s national team since making his debut in 2015 and was most recently called up to a Canada camp in January after his strong 2020 season.

Another FC Northwest product to suit up for Valour (there’s still another to come on this list), Dylan Carreiro played in the first two seasons for the club, sometimes wearing the captain’s armband, before hanging up his boots this past offseason.

In his youth days, he played for a trio of Winnipeg-based clubs — Oriole SC, FC Northwest, and WSA Winnipeg (now known as FC Manitoba) — before joining the Toronto FC academy in 2010. Along with future Valour teammate Michael Petrasso, Carreiro moved from Toronto to London, England in 2012, both joining the academy of  Queens Park Rangers.

Carreiro moved to Dundee in 2014, where he’d play four times over parts of two seasons, spending most of the 2014-15 season on loan at Arbroath. After leaving Dundee in 2015, he’d play in League 1 Ontario with Woodbridge Strikers and Vaughan Azzurri before joining the Canadian Premier League in 2019 with his hometown Valour FC.

The 26-year-old retired from playing earlier this year, choosing to focus on coaching and remaining in the game in other ways. Judging from his Twitter account, he’s also become a player agent since retiring from playing.

Another long-time women’s national team midfielder, Desiree Scott has done it all as well. Like Schmidt, she won back-to-back Olympic bronzes, and the 2011 Pan Am gold since making her senior national team debut in 2010, and has made 160 international appearances in that span.

She’s played a significant portion of her club soccer in Kansas City. After starting out with the University of Manitoba Bisons and the Vancouver Whitecaps program, Scott joined FC Kansas City of the NWSL for the league’s inaugural season, where she spent a season before going to England with Notts County. After 20 appearances in England, she went back to FC Kansas City, playing with the club until they folded after the 2017 season. From 2018 to 2020 she played with the Utah Royals of the NWSL, but after the 2020 season that team folded, with the team moving to Kansas City for the 2021 season, so she’s right back where she started her NWSL career nearly a decade ago.

Current Cavalry FC goalkeeper Tyson Farago has suited up for a number of Winnipeg-based clubs, representing his hometown at the youth and professional levels.

At the youth level, Farago played for SC Hellas, Winnipeg Lucania and Winnipeg Juventus, as well as spells with Brazilian club Goiás, English club Brighton and Hove Albion, and the University of Winnipeg, before forging his senior career with several clubs across Canada.

During his time at University of Winnipeg, Farago played for WSA Winnipeg and joined FC Edmonton (during their NASL days) in 2014 after leaving the university. He made 18 appearances for the Eddies over four seasons, before moving to the League of Ireland Premier Division with St Patrick’s Athletic. He made four appearances for them in 2018 before returning to WSA Winnipeg for the rest of 2018.

In 2019, with the Canadian Premier League set to kick off, Farago joined hometown club Valour FC, where he’d play 15 games  in all competitions in 2019. After not signing anywhere for the 2020 season, Farago has joined Cavalry FC for 2021.

This pair of Winnipeggers lit it up this season with Ferencváros TC in the top Hungarian women’s league.

Bednar, the club’s starting goalkeeper, and Kehrer, a forward, helped the club pick up their sixth consecutive Hungarian Cup, beating Astra 5-1 in the final. Not satisfied with the one trophy, they also picked up the league title shortly after. They beat MTK Hungária FC 6-2 over two legs, completing the double and qualifying for next season’s UEFA Women’s Champions League.

Bednar, 31, played university soccer in the NCAA with the University of Texas at El Paso, before going pro in Sweden. She played there for four years, with three different clubs, before heading to Hungary at the start of this past season. Kehrer, 24, played four years at the University of Alabama at Birmingham before signing with with Alborg in Denmark last year, and joined Bednar at Ferencváros in February.

Still just 19, Tyler Attardo was a standout for Valour in 2019 before being sold to Fernández Vial in Chile at the end of the season. The youngest signing in CPL history when he put pen to paper, he appeared in 22 matches in all competitions in 2019, scoring six goals.

Another product of FC Northwest (as well as Winnipeg Phoenix FC and Chievo Verona in Italy), Attardo was bought by Fernández Vial, but never played for the club. He was sent on a two-year loan to Xylotymbou, a club in the Cypriot Second Division, in September, with the intention to resell him to a European club at some point.

After being born in Havana, Cuba, but growing up in Winnipeg, Canadian midfielder Kianz Froese made his way up the Vancouver Whitecaps ladder, including three seasons in MLS with the club (2014-16), and also some time with Whitecaps 2. He made 24 appearances for the first team in that span, along with 22 with the reserves, before departing the organization in 2016.

He was sold to German side Fortuna Düsseldorf in early 2017, but never made a first-team appearance for the side, but scoring 17 goals in 55 matches for Fortuna Düsseldorf II across three seasons. He moved to 1. FC Saarbrücken ahead of the 2018-19 season, helping the club get promoted from the fourth tier to the third in his first season there and finishing within touching distance of a second consecutive promotion this past season.

Froese has made 53 appearances for Saarbrücken in two seasons, scoring three times in that span. He has also played twice for the Canadian men’s national team, most recently being called up in 2017.

A name that may be less well-known to many modern Canadian soccer fans, Doug McMahon was a star in the early-to-mid-20th century.

Born in Winnipeg, McMahon joined Wolverhampton Wanderers in the late 1930s and suited up for Chester City as well, on either side of serving with the Royal Canadian Navy during World War II. He scored 71 goals in 1948 for Montreal Carsteel, leading the team to the Canadian Challenge Trophy.

McMahon passed away in 1997 and posthumously entered the Canada Soccer Hall of Fame in 2002.