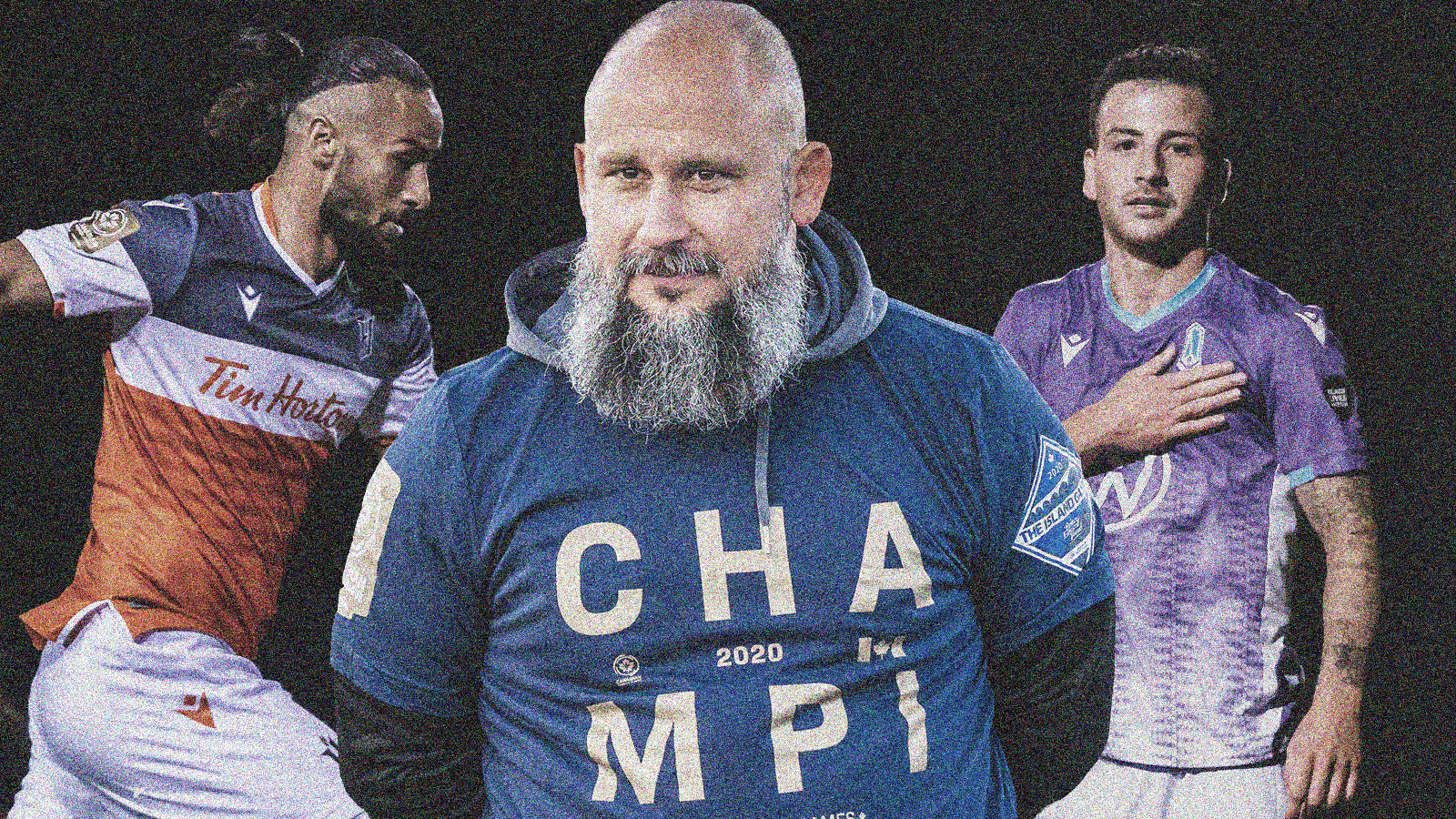 The 2021 Canadian Premier League season is mere hours away which means, yes, it’s time for some wild prognostications about what’s to come in the league’s third year.

A small handful of teams dominated the first two CPL Awards ceremonies; of the 10 total awards given out so far, Forge FC has won five, Cavalry FC has taken three, and HFX Wanderers picked up two in 2020. Forge star Tristan Borges took home everything he could carry in 2019, with the Player of the Year, U-21 Canadian of the Year, and Golden Boot trophies all going his way.

With a new season on the way (starting in Winnipeg, Man. with The Kickoff) and a huge wave of new faces (or faces in different jerseys) around the league for this season, each club will certainly fancy a few of their stars as candidates to pick up an award at the end of 2021.

So, with very little to go on other than performances in previous years, we at CanPL.ca — Charlie O’Connor-Clarke, Marty Thompson, and Benedict Rhodes — have come together to give our way-too-early picks for who might win each of the five CPL Awards in 2021.

RELATED READING: OneSoccer: Which CPL player has the most to prove in 2021? CanPL.ca weighs in

It feels like this could be a real breakout year for Ongaro. He’s one of a small handful of returnees from the 2020 Eddies squad, and incoming coach Alan Koch seems keen on centering his new attack around the six-foot-six striker. Over two seasons in the CPL, Ongaro has scored 13 goals to sit in a three-way tie for first on the league’s all-time scoring leaderboard — all that on a team that has really struggled to score in both years.

In fact, Ongaro has scored just over 40 per cent of Edmonton’s goals in the CPL. Looking at the Eddies’ new-look lineup, it seems to be set up pretty well for Ongaro to continue as the attacking linchpin, with wingers like Fraser Aird, Kyle Porter, and Shamit Shome who are all quite capable of creating and finding a target man in the box. A better Edmonton attack means even more goals for Ongaro.

The 28-year-old Forge FC attacker, who signed with the club last summer, has only scored twice for Hamilton – once in the CPL and again in Concacaf League. But it was that latter continental competition where he really shined as Forge’s ideal no. nine against difficult opponents. Floating around the final third, Babouli was good money for more than a handful of Forge goals as he started to link up well with teammates he’d only played a dozen or so games with.

That energy should translate to the 2021 season where Forge has only improved in the final third, adding none other than former Golden Boot winner Tristan Borges to its ranks.

Babouli had an impressive first season with Forge, scoring a pair of goals across 14 matches in all competitions. He also assisted Alexander Achinioti-Jönsson’s North Star Shield-winning goal against HFX. His chipped goal against Cavalry was one of the best goals of the 2020 season, and it will be interesting to see if the former Toronto FC attacker can keep his strong play up over a full season.

I strongly believe he can, and thinking about watching him play in a team with the past two MVPs — Tristan Borges and Kyle Bekker — is mouth-watering.

Goalkeeper of the Year

It’s a bit of a bold pick, but I feel that if Giantsopoulos gets an opportunity to start some more games at York United this year, he could surprise some people. In his limited appearances for Cavalry so far, Giantsopoulos has been excellent. He has four clean sheets in 10 games, and he’s only ever lost once in the CPL.

Choosing Giantsopoulos for this award is certainly a gamble, given the small sample size (and the fact that he’s competing with another very capable goalkeeper, Nathan Ingham, for starts), but you’ve got to take a risk sometimes, right? The new York keeper will be motivated to prove himself as a starter in the CPL, and he’s certainly shown in small bursts that he’s capable of that.

Oxner, 24, was nominated for the CPL Golden Glove last season after taking the Wanderers to Final 2020.

The Halifax native finished the Island Games with the most saves (22) and best save percentage (78 per cent) in seven appearances and placed in the top 90 per cent of CPL ‘keepers in claims (1.38) and saves (3.22) per 90 minutes, according to SportLogiq, who also highlighted his defensive action total as the most of any CPL goalkeeper.

Oxner’s growth as a professional is quite staggering, considering in 2019 he signed his first professional contract as a local prospect behind Jan-Michael Williams – a ‘keeper with over 80 international appearances. He’s since gone on to become Halifax’s no. one indefinitely.

Judging by that trajectory, it’s hard to bet against Oxner.

Marco Carducci has consistently been one of the best goalkeepers in the league, and has won this award before.

He finished equal with Forge FC’s Tristan Henry with a league-leading nine clean sheets in 2019, and followed it up with three more in nine appearances in 2020. He’s capable of making some impressive saves, and has often shown up when his team has needed him most — the penalty save on Tristan Borges in Finals 2019 is one that stands out.

With a decent backline in front of him, Carducci could continue to pick up clean sheets, and (more importantly) wins, in 2021.

U-21 Canadian Player of the Year

This would be the first time a player has won this award in their second year in the league (although that would go without saying in 2019). Young was a late signing for Pacific in 2020, arriving well into their training camp before the Island Games. The Victoria native was a revelation, though, ultimately seeing the pitch in all but one of the club’s games in PEI.

After working his way into the lineup from the bench, the now-20-year-old Young ended up starting all three of Pacific’s matches in the second round of the Island Games. He proved to be a capable two-way player in midfield, building solid chemistry with the dangerous right-sided combo of Kadin Chung and Marco Bustos.

Pacific has never shied away from letting the kids play, and Young will only continue to improve if given the opportunity. He could definitely grow into one of the CPL’s best young central midfielders with an extended stay in the club’s strong lineup.

Early reports out of Winnipeg suggest Rea, 19, looks sharp as an attack-minded midfielder who could match up with someone like Alemán and looks to bring some young gumption to Winnipeg’s offence.

Of course, this prediction is heavily influenced by Valour FC’s use of MLS loanees during the 2020 Island Games. Julian Dunn, who captured this award last Fall, came from Toronto FC while goalkeeper James Pantemis went on from a stellar stint on PEI to play for Canada in Olympic qualifying and make an MLS start just a week ago.

Predicting the stars will align for Valour (again) and Rea.

Atlético Ottawa are really high on midfielder Antoine Coupland, and so am I.

The Chelsea, Quebec native became the youngest player in CPL history when he came off the bench against Valour at the Island Games, and ended up making three appearances in PEI. With a higher under-21 minutes quota in 2021, Coupland should be given a fair bit of playing time, and if he gets an opportunity to play regularly he’ll try to run with it.

“We are very excited to have one of most promising young Canadian talents back for the second season of the franchise. Seeing Antoine develop his skills under Atlético’s coaching staff has been special, we can’t wait to have him back and continue to see his improvement. Having a local player at his age and calibre is very important to the project we are building,” said club CEO Fernando López in a press release announcing his return.

Big praise for someone who only turned 17 in December. He could be in contention for this award for the next few years, and 2021 is a chance for him to really break out.

Coach of the Year

Any other pick is overthinking this. It’s time.

In fact, it’s been time for a while — Smyrniotis has been at the helm of the CPL’s best club over two years, the steady hand on the rudder of a juggernaut. It would take a lot to convince me any other CPL coach should win over Smyrniotis, whose body of work with Forge should make him a nailed-on finalist for this award in 2021 regardless of whether or not his club wins a third-straight championship (which they totally might).

The CPL has some incredible coaches, but there’s no denying that Smyrniotis has accomplished the most with his side.

The reality is Bobby Smyrniotis has won two CPL Championships and both times he watched the coach he beat in the final capture Coach of the Year. Forge defender Dom Samuel said it best: “What else does he have to do?”

Well, on paper, looks like he needs to lose a CPL Final.

Forge should be considered favourites to at least reach a final or finish near the top of the table. The return of Tristan Borges, Dejan Jakovic joining… and a team that was one result away from qualifying for the Concacaf Champions League. Of course Smyrniotis is a favourite.

Smyrniotis has undoubtedly been the best manager over the past two years, but this award should be about 2021 only. With Cavalry so far looking like the best team on paper, in my opinion, they should be in the North Star Shield conversation in the fall.

If Tommy Wheeldon Jr. can get his Cavalry side across the finish line for the trophy they came so close to winning in 2019, I wouldn’t be at all surprised to see him become the first person to win this award twice.

Player of the Year

Feels like this has been coming for a while, right? Bustos has been one of the top players in the CPL for two years now, having taken another step forward in 2020 after his move to Pacific. Bustos is thriving as the star player on Vancouver Island — certainly, he was keen to take up that mantle in the Island Games, putting the team on his back to push them into the top four on the final day of the first round.

If Pacific continues to improve this year, with essentially the whole team from 2020 returning and a few key additions arriving to bolster the midfield and attack, Bustos could be poised for the best season of his career. He has aspirations of moving up to a higher level, but Bustos won’t rest until he’s got something to show for his CPL stardom — ideally, a North Star Shield, but a Player of the Year trophy wouldn’t hurt.

A motivated Marco Bustos with an ever-improving young team around him is a scary prospect for the rest of the CPL.

While my head tells me to write Bustos here, my gut brings me to a different place.

As already mentioned, Mo Babouli is set to be the talisman of this Forge FC attack in 2021. This Hamilton side will be good again, too – that’s why I selected Babouli himself for golden boot and Smyrniotis for coach of the year.

In the right environment, it’s hard to argue against a player like Babouli in the CPL. Forge seems to be that right place, considering how demonstrative Babouli was at the Island Games and in Concacaf League. At 27, the versatile attacker is coming into his prime years, too.

Why not bet on Babouli?

He was nominated for this award a year ago, and if he’s as important to a Pacific team with lofty expectations as we think he will be, watch out.