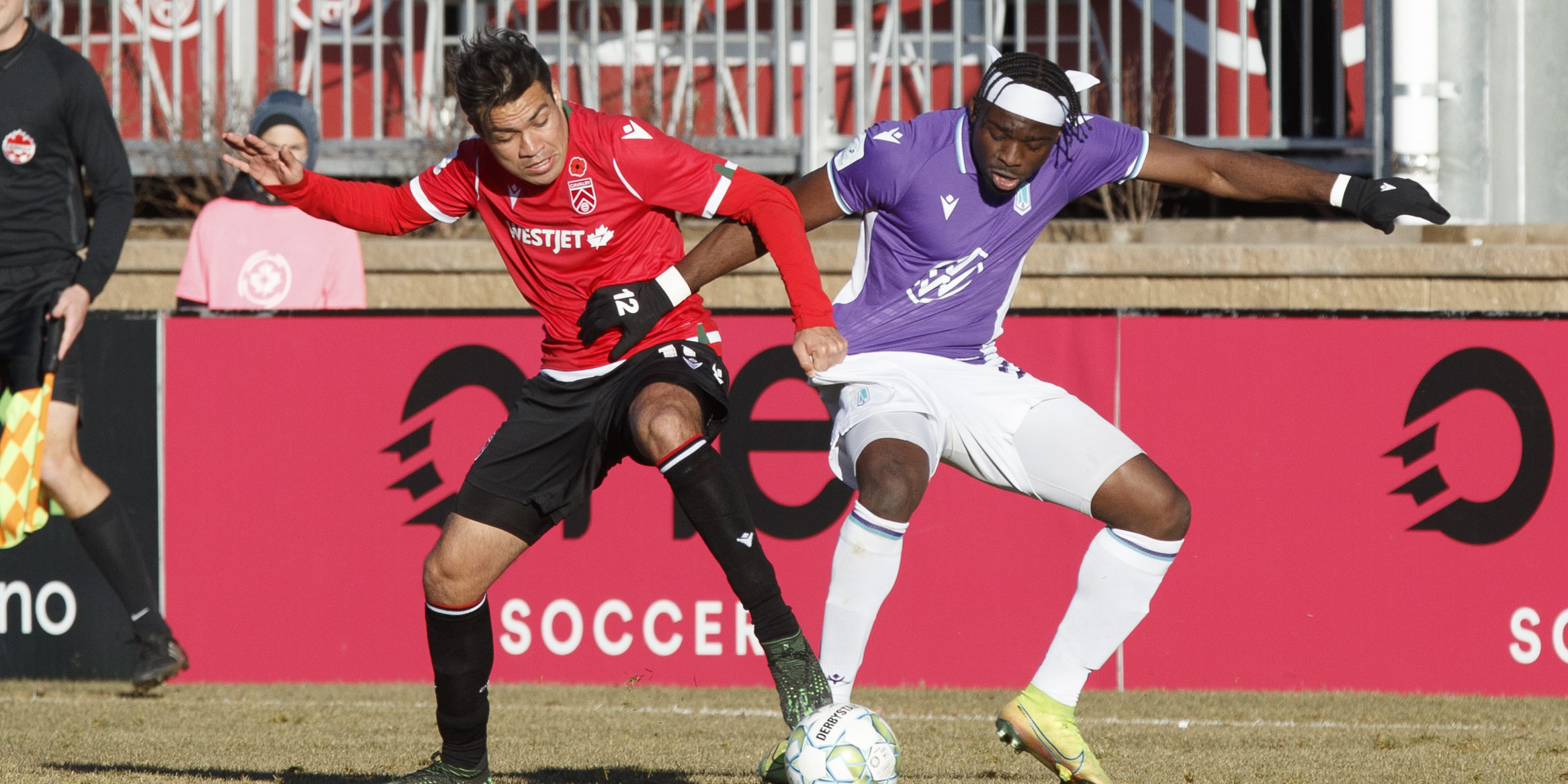 Cavalry FC looked strong on Sunday afternoon as they dispatched Pacific FC in a narrow 1-0 win at ATCO Field. Joe Mason got the home side on the board just 16 minutes in with an excellent finish after bringing down a good lobbed pass by Mo Farsi, and from there the Cavs remained mostly in control as they locked out the Tridents — and in doing so, they clinched a top-two spot in the CPL and guaranteed home field advantage for their first playoff game.

Just like that, Cavalry FC have ensured we’ll be seeing ATCO Field on the first weekend of CPL playoffs. With the win, they moved into a tie with Forge FC on 47 points (although still behind in total wins, the first tiebreaker), two ahead of Pacific — who have now completed their 28-game regular season schedule. So, the Cavs will finish no lower than second in the league table; if Forge struggle in their last three games, including one against the Cavs, then first place is still on the table, but the odds of that may be somewhat slim.

Nonetheless, the Cavs got what they were looking for on Sunday. They scored early, and although they didn’t create many top-quality chances in the second half, they did an extremely good job of shutting down a dynamic Pacific attack and preventing them from really challenging Marco Carducci — in fact, Pacific never managed to take a shot on target, despite nine attempts.

“We knew what was on the line, we knew that we have to win,” Cavs boss Tommy Wheeldon Jr. said postmatch. “We want to have home field advantage here, because you’ve heard our fans today. They were superb, they were our 12th man. And it’s cold, it’s hard, it’s altitude, and these are the advantages that help you through the playoffs, and we intend to use that to our max.”

Pacific, meanwhile, were somewhat lacklustre going forward, which will at least be something of a concern. With no shots on target and 39.6% of duels won, they were missing some of their ruthlessness. Of course, they — unlike Cavalry — played midweek, in an exhausting Canadian Championship semifinal against MLS side Toronto FC, but certainly they didn’t look like their fast-moving selves for most of the game.

Although they missed the opportunity to claim home field, Pacific coach Pa-Modou Kah explained postgame that he feels his side should have taken care of business earlier in the season.

“When you look back at the season after 28 games, it’s not the last game of the season it’s going to depend on, it’s always what you’ve done prior,” Kah said of his side’s finish. “For us as a group, we had missed opportunities in the month of October. We finished third because we deserved to finish third, that’s the way it works in football, when you have your opportunities and the momentum you’ve got to take care of it, and today was a step we could have taken.”

The most impressive thing about Cavalry’s performance in this match, particularly the first half, was the sheer speed with which they seemed to turn possession into chances. Victor Loturi and David Norman Jr. did well in midfield to shield the defence and win early balls, and they were very purposeful in playing quickly forward to an open man ahead of them — often Mo Farsi or Sergio Camargo.

That kind of quickness in possession hasn’t always been a hallmark of Cavalry this season, but it’s certainly been a hallmark of many of their best performances. They were direct and aggressive going forward, looking for quick balls between the lines to bypass as many Pacific players as possible and get into the attacking third. The final product left a little to be desired sometimes, with Pacific usually taking care of the deep cutback passes back into the box, but Joe Mason’s first-half goal was a good example of how the Cavs can be rewarded for playing fast and counting on their own quality. Farsi played in a perfect ball to Mason, whom he knows has the technical ability to bring that pass down and finish — which he did.

With Daan Klomp slotting in at right-back to provide cover, Farsi was able to get forward more freely as a winger, which helped him play a greater role in the attack for Cavalry. That right side was particularly strong for the Cavs, who used that flank an incredible 60% of the time in possession.

“I think sometimes we’ve forgotten a bit of our identity, that where you get to the playoffs, you get to these must-win games, sometimes you’ve got to combine the pretty with the gritty, and I think we did that today,” coach Tommy Wheeldon Jr. offered on his side’s performance. “I think first half, there’s some really nice football. Second half, we had to really dig in, and they made it physical, made it tough. I’m delighted, especially after conceding last week, to get a shutout against the highest-scoring team in the league; it shows how tough our team is.”

Farsi, for his part, said that kind of direct play is something he had worked on specifically in training this past week; he revealed that after training sessions he would specifically practice crosses, sending “50 or 60” balls into the box each time out. Certainly, it worked when it needed to.

After seven meetings between Cavalry and Pacific in 2021 (including a Canadian Championship tie), the score ends even: three wins for both sides, plus one draw. However, this book may not yet be closed. It’s likely (though not certain, as Tommy Wheeldon Jr. was quick to point out) that Cavalry will finish second and Pacific will finish third in the table, meaning the CPL semifinal will be played between these teams in Calgary later in November.

With the two teams becoming so familiar with one another, it’s been clear that the intensity has increased in these final few meetings as we approach the playoffs. This was a particularly physical game, with six yellow cards — four of them to Pacific players within a 12-minute span in the first half — and there were a few moments of hostility toward the end as tempers boiled over in such a hard-fought match.

This matchup is fast becoming one of the best rivalries in the CPL this year, with both teams playing entertaining football and hovering near the top of the table throughout most of the season. In some ways, a physical contest like that might play more to Cavalry’s favour, as the side with more experience in that style of play, but Pacific have definitely shown they’re capable of going toe-to-toe.

“We’re not used to playing a physical game against Pacific, I think it was the first time they came hard like that,” Mo Farsi said postmatch. “And you saw in the first half, they took a lot of yellow cards. So yeah, they used to play a little bit more football, but this game at the end of the day you have to win because you want to play at home in the semifinal so I think that’s why you had a more physical (game).”

Across the pitch, Pacific agreed that they were looking to come in with intensity. With these late-season games acquiring a playoff-esque atmosphere, Pa-Modou Kah indicated that, at this stage, it’s fine details and elements outside of tactics that can turn the tide of a game.

“Playoffs is playoffs, we’re not going home,” Kah said. “For me, it’s not about the tactics, it’s about your heart. It’s about bringing the heart, being physical, and then go home with a victory. We come back here in 13 days, that’s always in my mind. We’ve got to do it the hard way, simple as that.”

Cavalry will still have their eye on climbing into first place as long as it remains possible, but no matter what: this matchup is sure to be an entertaining one for years to come.

The Cavs’ dynamic wide man was at the top of his game on Sunday, running miles up and down the right flank. He created the goal that made the difference with an excellent pass, and he did a lot of defensive work in the press, making five tackles and winning possession 10 times (both team-highs).

This was Pacific’s final match of the regular season, so they’ll look ahead now to their CPL semifinal later in November. Cavalry, however, have one match left to play before then — they’ll be in Hamilton to play Forge FC on Tuesday, November 16 (6 pm ET).