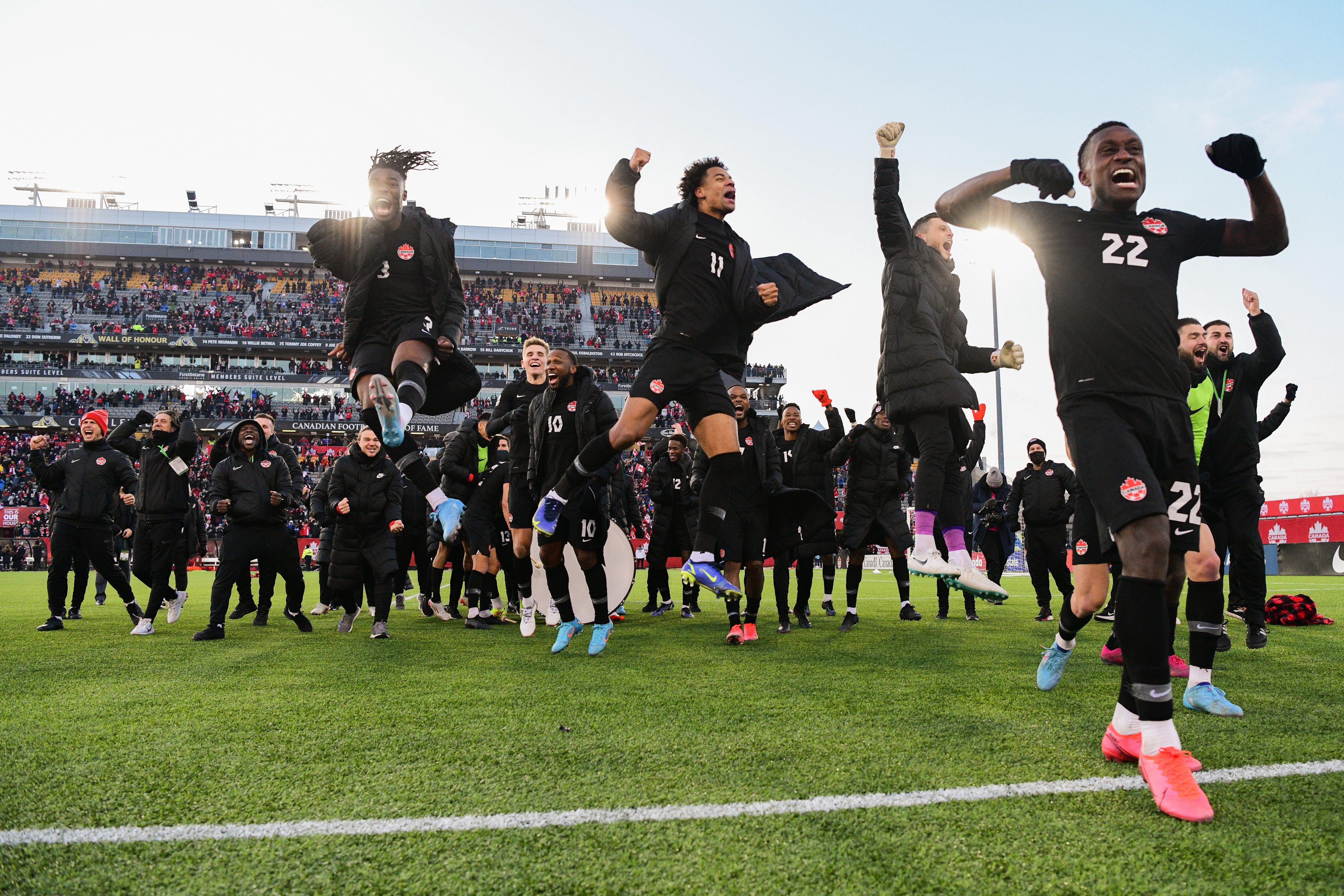 The Canadian men’s national team downed the United States 2-0 in 2022 FIFA World Cup qualifying Sunday in front of 12,000 fans in Hamilton, Ont. – their fifth win a row in qualifying and another emotional marker in the team’s meteoric rise in world football.

If Canadian soccer fans didn’t get a warm feeling from the opening notes of “Sweet Caroline” sung by fans during pre-game festivities (more on those later) at Tim Hortons Field – the next two hours gave them no better times than any men’s national team supporters have had in a generation.

Cyle Larin’s early marker – on a neat turnover and give-and-go counter-attack in the seventh minute – proved all Les Rouges would need to increase their lead atop the Concacaf qualifying table and, paramountly, all but guarantee their trip to the 2022 FIFA World Cup in Qatar. Sam Adekugbe added a worldie late in the match, with the left-back confidently striding up the pitch to contribute a second.

“You have to know, in games like this, there are two elements: Skill and team spirit,” Canada coach John Herdman sputtered out after the exhausting afternoon. “We had both today.”

The United States held the bulk of possession following the goal, but failed to create meaningful breakthroughs against Canada’s flexible 4-4-2 shape – led by strikers Larin and Jonathan David. Herdman’s side held strong on a chilly southern Ontario afternoon but, like many times during this final round of qualifying, they never looked close to buckling.

“The players back our tactics, they back our strategies,” Herdman added. “When players are 100% behind something you tend to get some pretty good outcomes.

“As the game went on they took a bit of control… But we didn’t give much away,” midfielder Jonathan Osorio said after the match. “The fight out there for each other is just an amazing thing.”

Canada landed with the advantage in shots on target, four-to-three, and took the better of the chances.

“Overall, we wanted that dominance in possession with chances in the goal,” United States head coach Gregg Berhalter said following proceedings. “It was a dominant away performance, without a win… We’re still in a good position in qualifying.”

“I don’t think Canada dominated anything tonight – give them a lot of credit, though,” Berhalter added. ” What separates Canada from other teams in the group is their quality strikers. The first goal is something two quality players created.”

The result left Canada on 22 points through 10 matches thanks to a top-of-the-table worthy 6-4-0 record – including a spectacular 2-2-0 posting in their four matches against Concacaf’s historic powerhouses in the US and Mexico.

Canada’s streak is also a record of sorts: Only one side (Mexico, 1998) has posted an undefeated record in Concacaf’s final round of World Cup qualifying. Canada has bested that Mexico side’s 4-6-0 record, which was limited to 10 matches in the then-six-team group.

Herdman’s 22-point start is also significant compared to final rounds of the past, having landed one point behind Costa Rica’s modern record of a 23-point haul in the run-up to the 2002 World Cup Finals.

“First thing we said when we went into the huddle was ‘we’re not done’,” Herdman added. “We need more points… We need to be ready to be into heat in El Salvador.”

Next up for Canada is an away trip to El Salvador on Wednesday (9 pm ET, live on Sportsnet and OneSoccer), which will present another chance for Canada to get ever closer to Qatar.

Canada’s stalwart goalkeeper Milan Borjan showed up to a chilly Tim Hortons Field – in his hometown of Hamilton – with his trusty grey sweatpants and excelled. A massive save in the first half, parrying a reaction stop parallel to the crossbar, was the latest in a series of massive stops the 34-year-old Red Star Belgrade netminder has produced this World Cup qualifying cycle.

“It’s been 13 years with this program,” Borjan said after the match. “It’s been a long time and this is what we deserve. This is what Canada deserves. It’s just unbelievable.”

When prompted about how quickly the program has risen, Borjan gave just two words: “John Herdman.”

A NEW ALL-TIME LEADING GOAL-SCORER FOR THE #CANMNT 🍁

Tim Hortons Field, home of Forge FC of the Canadian Premier League, was centred in a neighbourhood flooded by red and white on Sunday. Pre-match scenes provided a brilliant prelude to the result – crowded areas around the busses arriving with smoke bombs and chanting.

“It helped a lot – the fans were tremendous,” Adekugbe said.

“I’ve seen nothing like it,” Herdman said of the walk-in. “It was the first time here that I’ve felt like I was living in a football country – it was amazing. It’s no exaggeration – If you were in that mosh pit you would know what I mean. In the dressing room, the players were buzzing, absolutely buzzing.”

“It’s what we dreamed of… You can pull your Canada jersey on now and be proud of us as a country.”