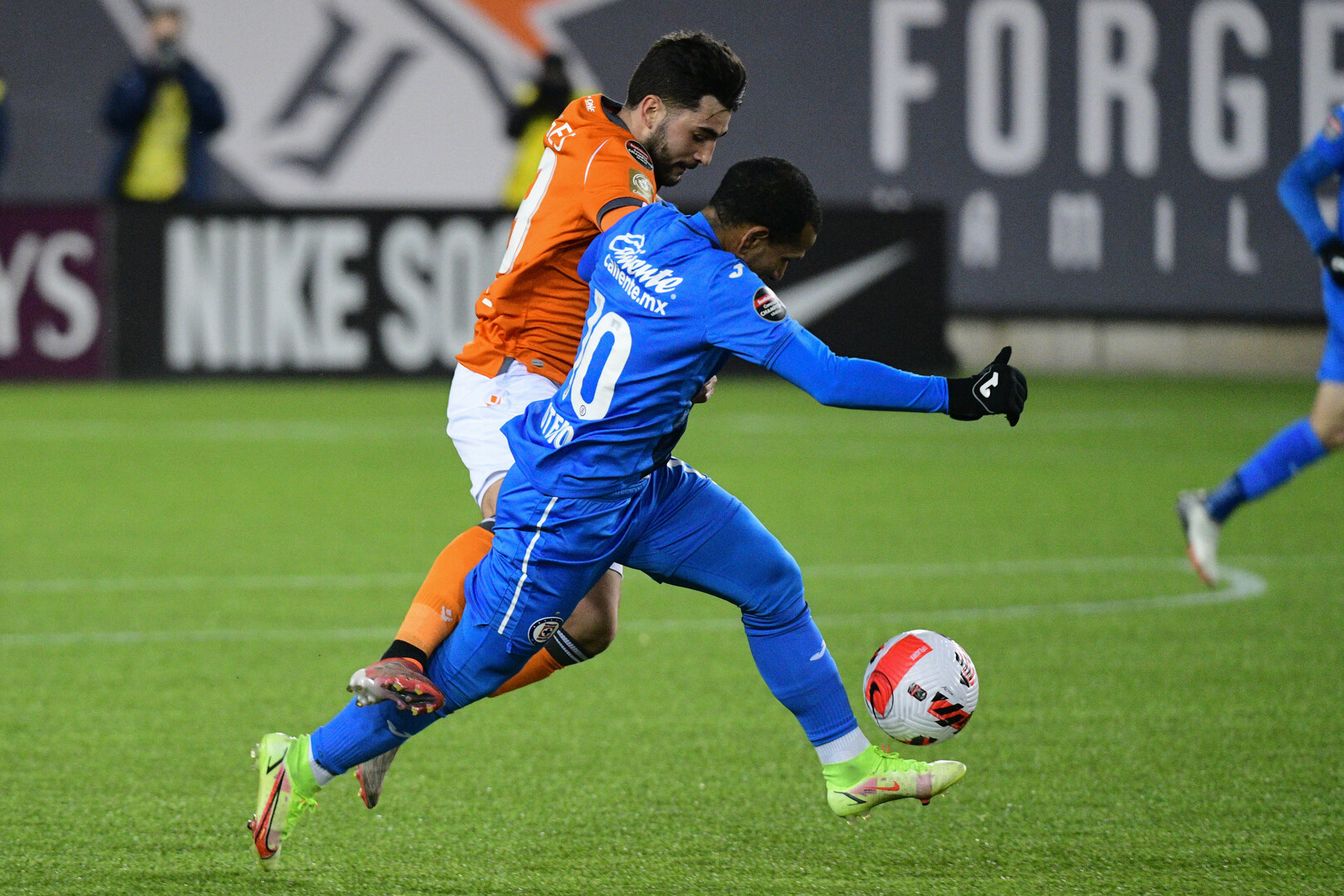 Forge FC made an admirable maiden voyage in the Concacaf Champions League on Wednesday night, dropping a narrow 1-0 result to Mexican side Cruz Azul in Leg 1 of this round of 16 tie. On a wet and windy evening at Hamilton’s Tim Hortons Field, Forge went toe-to-toe with the Liga MX giants, creating a few very dangerous chances in the first half — including a shot that Tristan Borges just put over the bar, and a corner kick that was kept out at the goal line.

It would be Cruz Azul who scored in that frame, though, as a long free kick from Rómulo Otero sailed over all the assembled players in the box and stymied Triston Henry to find the bottom corner. Though Forge gave all they had in the second frame to try and level the score, the goal ultimately eluded them en route to the slim defeat ahead of next week’s reverse fixture in Mexico City.

The CPL outfit made history on Wednesday night with their very first touch of the ball, breaching uncharted waters in becoming the first club from their league to play in the Concacaf Champions League. They were adamant, however, that they would not be content with a participation trophy by making up numbers in the tournament.

No, they came out on the front foot in the opening half. As has been the case every time they’ve played a new foe in continental competition, Forge were not intimidated by the established Mexican opponent. In fact, they arguably had the better share of the scoring chances in the first 45, playing with the wind at their backs. They sought to cut off as many passes through midfield as possible and spring direct transitional attacks, which they did successfully on a number of occasions.

Tristan Borges, in particular, caused serious problems for Cruz Azul playing as a number 10; he marked opposing midfielder Erik Lira tightly and did well with passes into his feet he could flick in behind for the likes of David Choinière to chase. Borges also nearly opened the scoring in the first half, cutting in from the wing on his left foot and curling a shot just over the bar (a chance he may want back).

Forge clearly earned the respect of their opponents, considering their quadruple substitution in the 61st minute to bring on all the attacking weapons on their bench, including high-profile attackers Bryan Angula and Uriel Antuna. Clearly not taking the tie for granted, Cruz Azul looked desperate to add another goal and put the tie to bed.

“I’m massively proud of this team,” Forge boss Bobby Smyrniotis said postmatch. “We’ve walked out of this game and are disappointed (but) we’ve matched our opponent, we’ve played good football with short preparation time, and playing against a massive club in Cruz Azul.”

Undoubtedly, Forge proved that they earned their spot in this competition; though they were outmatched on the day by a more experienced opponent, they did not wilt under the pressure and delivered a fine performance of which they should be proud.

🗣 "There's a ton of positives for us to take away from this,"@ForgeFCHamilton captain Kyle Bekker on tonight's historic first match for his side in @TheChampions #SCCL22 pic.twitter.com/bwV6yruEw6

Perhaps the greatest mark of the disparity in level between the sides was just how expertly Cruz Azul prevented Forge from getting forward in possession. When Forge took possession, whether from a restart or from winning the ball in open play, the visitors — in unison — closed in like a vacuum to suffocate the ball and take away any space for Forge to play in.

The speed with which Cruz Azul shifted to the ball and closed down Forge players was something the CPL side have not had to deal with often, usually having more time to scan the field and progress the ball with their build-up play. On a few occasions, they did manage to play wingers into space with quick tapped passes around pressing defenders or by winning the ball in one-on-one battles and broken plays.

Cruz Azul, clearly in much better match rhythm and fitness than their opponents — who haven’t played since December 5 — were excellent at stretching and compressing the pitch when needed. They would often drift wide in possession, before covering space rapidly to take it away from Forge.

Many of the best teams in the world are those who can suck teams into traps and close them down, which is something that Cruz Azul did to Forge on occasion; by lining up wide, they would invite Forge into certain areas when playing out of the back, only to press them and force them to recycle the ball backwards. Toward the end of the game, with both sides stretching the pitch a little more, Forge actually managed to play through the lines a little more comfortably, although they still ran into trouble near the box with how quickly Cruz Azul’s midfielders and wide players recovered to get back behind the ball after being passed.

Bobby Smyrniotis handed out a surprising number of club debuts on Wednesday, handing starts to Terran Campbell, Ashtone Morgan, Kwasi Poku, and Aboubacar Sissoko. The latter two lined up in somewhat surprising wide roles, Sissoko playing at right fullback and Poku seemingly drifting between left-back and left midfield with Morgan often tucking in behind him.

Against a talented, experienced front line (albeit a rotated one from Cruz Azul’s typical lineup) the Forge defenders did tremendously well. With Dominic Samuel and Garven Metusala at centre-back — the same pairing that started the CPL Final in December — Forge’s backline quite capably handled the opposition and really didn’t give up many serious chances to speak of. Really, were it not for a flukey goal from a set-piece, they could well have been going into the Azteca on level terms.

“The talent is immense in this country,” Smyrniotis said. “And I think that you’ve seen that on the field. When you look at the two centre-backs on the pitch, and Dom Samuel especially who’s been an absolute rock for us for these three years and going into the fourth year; I think if Dom Samuel’s playing in Liga MX it’s a normal thing… Garven Metusala again today, a year ago he was in U SPORTS, and there he is playing in the Concacaf Champions League and next week he’ll be at the Azteca.”

Forge demonstrated their tactical intelligence with the way they shifted their defensive structure, flowing unmistakably between a back four and a back three, with Morgan occasionally playing the wide fullback position and other times tucking further in to provide extra cover.

To start the number of newcomers that they did was perhaps a gamble — although maybe a necessary one due to availability — and it’s a testament to the level of Forge’s training and preparation that they were able to integrate those players in such a difficult game. Smyrniotis didn’t shy away from bringing on more new blood late in the game either; Alessandro Hojabrpour got his debut not long after the hour mark, as did Cale Loughrey.

Though Cruz Azul aren’t necessarily known as the most aggressive attacking team in Liga MX, they have more than enough quality, even with a rotated squad, to put Forge under pressure in transition — which they did on occasion. But Forge were more than up to the task. Samuel and Alexander Achinioti-Jonsson, in particular, were key to preventing several counter-attack opportunities in the second half by chasing down and tackling forwards who would otherwise have been through on goal.

The Swede was tasked with sitting in front of the centre-backs as a holding midfielder most of the night, and he did an excellent job controlling space and standing his ground in quite a physical assignment. He made a number of exceptional line-breaking passes as well, looking sharp on the ball when very few other players — from either side — could say the same.

Leg 2 will go down at Estadio Azteca in Mexico City next Thursday, February 24 at 8:30 pm ET.