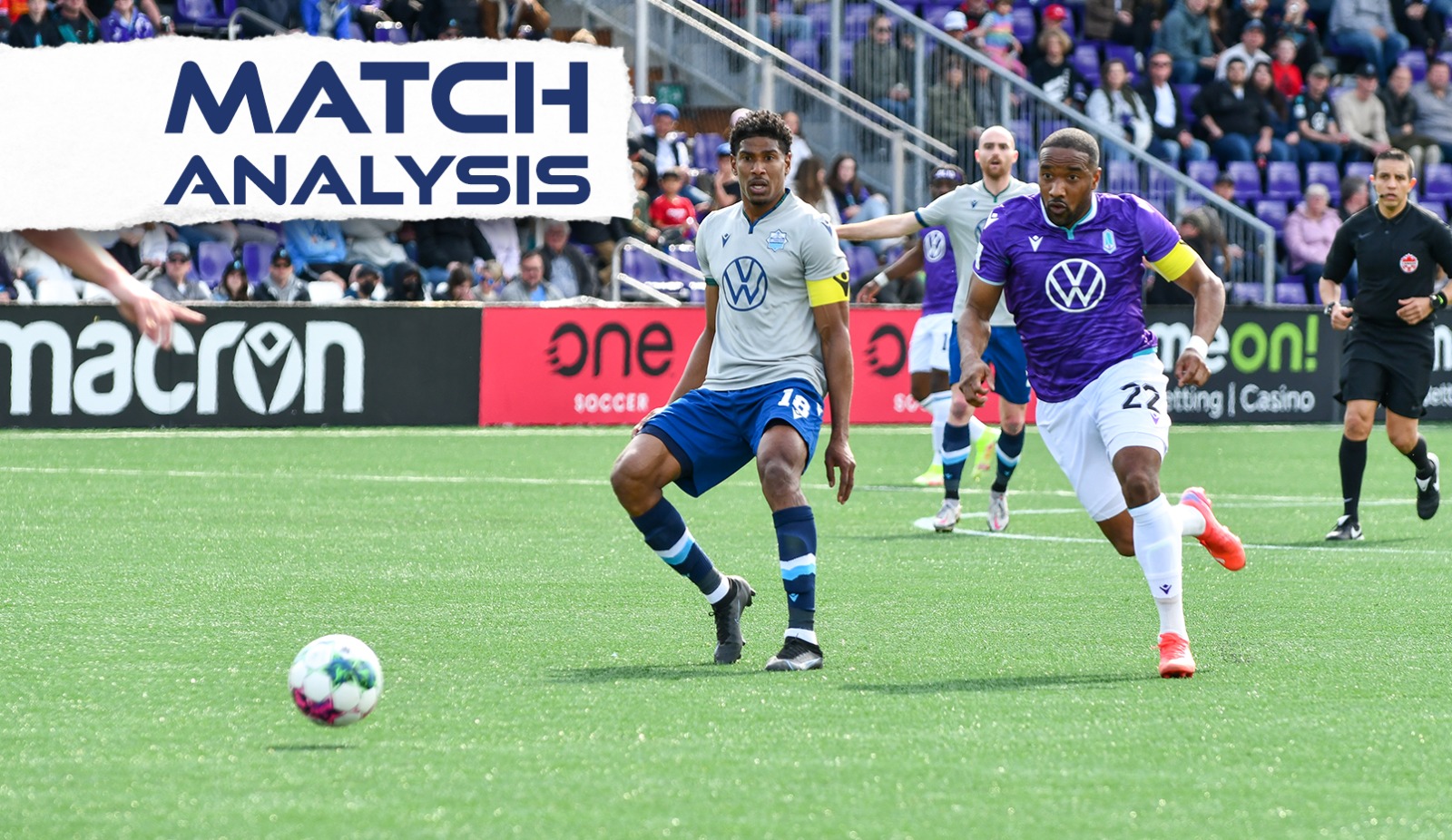 Pacific FC continued their red-hot start to the 2022 CPL campaign on Saturday, grabbing their third win in as many games with a 2-1 result over the visiting HFX Wanderers, largely thanks to a late goal from Alejandro Diaz.

To start the game, both teams would trade goals in the first half, as Manny Aparicio would give Pacific the lead via a nice header early on, before the Wanderers equalized via a Cory Bent free kick right before half time.

From there, that’d pave the way for a fun finish, as Pacific’s Diaz would then bury home a penalty in the 84th minute to secure all three points for the home side, sending their fans home happy.

Coming into this match, with Pacific being one of the more attacking teams in the CPL this season, and the Wanderers being one of the better defensive sides, it was going to be interesting to see which of those two styles would take over the game.

Would it be Pacific’s attack, who with 6.11 Expected Goals for (xG) and five goals, have been playing some fun and expansive soccer to start the year? Or would it be Halifax’s defence, who with just 1.55 xG against and one goal conceded, have quickly proved their worth as a stingy defensive side?

Surprisingly, however, the answer would somehow end up being a bit of both, as Halifax would once again put up another strong defensive performance, yet despite that, Pacific found a way to keep their red-hot attack firing.

That’d be reflected in the numbers, too.

Even though both sides would combine for just nine shots (Pacific had the edge 5-4 there), with only three of them reaching the target (2-1 in favour of Pacific), those three shots on target would all end up as goals.

So despite the xG being just 1.29-0.11 for Pacific (with about ~0.8 of Pacific’s being from the penalty spot), reflecting a strong defensive performance from both sides, goals somehow ended up being the flavour of the day, all thanks to some clinical attacking play.

Because of that, despite the score, which would indicate a rather wide-open game, it would instead end up being rather cagey, which both managers noted and appreciated.

“I thought we did well,” Halifax’s head coach, Stephen Hart, said. “We made a mistake on the first goal, our line was a little too deep, and we gave them good position, and then the second goal was a penalty, but it was a game of very few chances for both teams (despite that).”

“It’s something that we spoke about as a group and as a team,” Pacific head coach, James Merriman, added. “Full credit to the way that we defended.”

Therefore, as strange as it might be to say after a 2-1 game, that’ll be something that they’ll both want to keep up heading into their next matches, as they’ll both know that defensive performances like that will often lead to positive results on most occasions.

If there was one thing to be taken from Halifax’s first two matches of the season, it’s that they’re going to be very tough to break down defensively this season, especially in the middle of the park.

So as they got set to do battle with a Pacific side that loves to play through the middle of the pitch, it was imperative that the Wanderers found a way to keep that up, because if not, this Pacific side would have no issues with running through them in that area. And to give credit to the Wanderers, they realized that, and came out with a very organized defensive posture in midfield once again, one that limited time and space for Pacific on the ball.

By deploying in a tidy three-man unit in midfield, one with a defensive double-pivot tucked underneath an advanced midfielder, they made sure to get back and below the ball whenever they found themselves without possession. Not only that, but they also then did a good job of not being sloppy with the ball at the other end, which is just as important when it comes to playing against these sorts of dangerous offensive teams.

As a result of all of that, they kept a usually dangerous Pacific side much quieter than usual, making for a frustrating afternoon for the home side.

Yet, that’s just a credit to the Wanderers midfield, who were immense on the day.

Especially through their double-pivot, which consisted of Jérémy Gagnon-Laparé and Andre Rampersad, they allowed their side to really make things difficult for their opponents in a key area of the field.

That impact would be noticeable in multiple ways, as well.

From their ability to hold onto possession and not rush things when their team had the ball, to how they were able to stay compact and organized when they found themselves without it, that allowed them to not be overrun by a Pacific side that has made a habit of running through teams in that area of the game.

As a result, while there were many things that the Wanderers might rue when looking back on this game, their lack of chance creation being the main one, the fact that they were as close to grabbing a point as they were is in large part due to their midfield, which continues to be a key aspect of this team’s identity early on.

“Andre (Rampersad), in particular, recovered a lot of balls for us, and Jérémy (Gagnon-Laparé) found his feet in the second half,” Hart said of the duo. “They move the ball really well, did a lot of defending, and they work well together. And the more games we get under our belt, the better we’ll get (in that area).”

Pacific’s front four continues to shine in all situations:

A huge key to Pacific’s success in the early days of this campaign? Their electric attack, who continued a strong start to the season in this game.

Now up to seven goals as a team, Pacific’s attackers have now scored six of them, including both of their goals in this game.

Plus, they’re not just scoring in bunches, but are continuing to score clutch goals, too, and there is no better example of that than in this game, where despite not seeing much of the ball in dangerous areas, Pacific’s Diaz and Aparicio would be able to score on both of their sides’ shots on target.

Yet, that’s just been the kind of season that they’ve been having as an attacking unit.

Paced by Diaz (two goals, one assist), Aparicio (two goals) Marco Bustos (four assists, one penalty won) and Josh Heard (one goal, one assist), and complemented by the likes of Matteo Polisi, Djenairo Daniels and Gianni Dos Santos, it feels like no matter who Pacific throws up front these days, they find a way to make things happen.

Plus, that impact isn’t just felt on the offensive end, either, as Pacific’s strong defence can partly be credited to the work that their attackers find a way to put in each game off the ball, as well.

As a result of that, it’s allowed them to continue and grab clutch results such as this one, where even if they might not see the ball as much as they would’ve liked, they found a way to bury home their chances in the right moments. And that’s key.

No matter the state of the game right now, be it one where Pacific is controlling play, or one where they aren’t, this attack is versatile enough to deal with those sorts of different states, staying ready for whatever is required of them.

Just look at their last two games, as an example.

A week prior, they saw a lot of the ball, and made the most of it, generating chances galore in a fun 3-2 win over Valour. Then, in this one, despite a polar opposite game state, they still managed to have their fun on limited chances, too.

“It’s amazing to watch them,” Pacific defender, Thomas Meilleur-Giguère, said of his team’s attack. “We’re very proud when we watch them.”

“You can see it in their performances,” Merriman added.

So now, they just need to find a way to keep this sort of attacking play up, as they get set to tackle the rest of this campaign.

If they do, it’s going to be hard to stop them in most games, and their record to start the year is just a prime example of why, as the way that they’re rolling offensively hasn’t been easy for opponents to defend.

“That’s why they were champions last year,” Halifax’s Cory Bent said of Pacific afterwards. “These kinds of teams, you can’t give them a sniff around the box.”

As he usually does for Pacific, Aparicio put up another tireless performance in the middle of the park, finding a way to make an impact on both sides of the ball once again. From the offensive side of his game, where he had a goal, a shot and a key pass, to the defensive side, where he had one tackle, an interception and 11 ball recoveries, it felt like he was everywhere for his side, playing a key role in this victory.

Pacific FC will head over to Alberta for their first road game of the 2022 CPL campaign this week, as they’ll take on FC Edmonton at Clarke Stadium on Wednesday, April 27 (6 p.m. PT/7 p.m. MT). Meanwhile, Halifax will head back to Atlantic Canada for their first home game of the campaign, also against that same FC Edmonton side, who they’ll host at Wanderers Ground on Saturday, April 30 (12 p.m MT/3 p.m. AT).