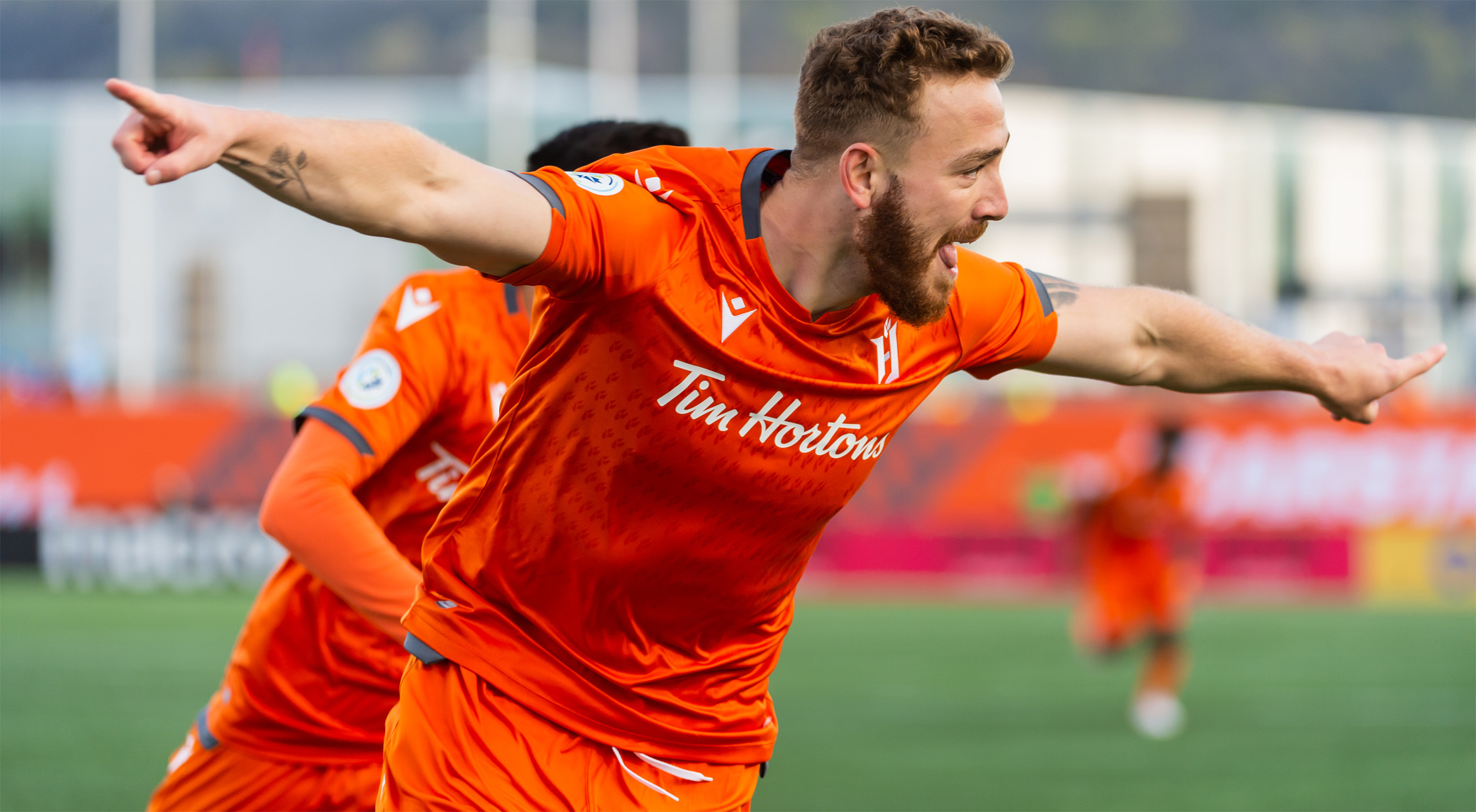 TORONTO – Scoring a goal starts with a good breakfast.

At least, it does for Anthony Novak.

The Forge striker credited a change in his morning routine for the extra pep in his step as he scored a brace in a 3-1 win away to Valour FC back in August.

But what did Novak have for breakfast on that particular day?

“Typically on game day I like to make an omelet, but we were on the road … ” Novak revealed to CanPL.ca. “Something I had been craving, but hadn’t had in a while, were the breakfast sausages. They had them at the hotel.

“You put a little syrup on that? Oh man. I was buzzing about that. You get the syrup and it drips onto everything else, the scrambled eggs and whatnot.”

You can feel Novak’s excitement – you see, breakfast is the most important meal of the day, no matter when.

“You can eat breakfast any time of the day: dinner, lunch,” Novak laughed. “I fast most days until about 1 p.m. We have our team meal after training, so that’s normally the first thing I eat.

“They actually serve us lunch, so when I get home I have my breakfast around 3 or 4. I never miss it.”

Sausages, eggs, cereal, it matters not – the 25-year-old striker is all about a good start.

That’s exactly what Novak enjoyed with Forge, scoring just three minutes into his Canadian Premier League debut against Pacific on May 8. Since then, he has established himself as the team’s first choice at centre forward, and, though limited in action due to a knee injury, Novak has been a valued contributor for the Hamilton-based side, scoring four goals in eight CPL appearances.

“He’s a player I’ve known for years and a player that I’ve really liked,” said Forge head coach Bobby Smyrniotis. “If you look at his work ethic, it’s great, it’s relentless. Then on the flip-side, he’s not only about that physical component of the game, he’s also got a good touch on the ball. He’s able to play and combine. Looking at his finishing, he’s got a good level of finesse to his game.

“Most importantly, he’s an honest player, always willing to put in a good shift from whatever role is given to him.”

Novak – who was previously a standout in League1 Ontario, and nearly called it quits on playing soccer altogether – knew Forge would be the right fit for his talents.

“I’ve always thought that once I found myself in the right environment, I have the confidence and the ability to not just fit in, but excel,” Novak said.

“Now that I’ve finally got the opportunity, I’m just trying to take it by the horns.”

Novak isn’t the only Forge player trying to make the most of his opportunities, though he has garnered the attention of his teammates, including fellow attacker Tristan Borges.

“The biggest attribute (that) comes to mind to describe him? Finisher,” Borges described. “Being a striker, that’s the most important thing. He’s a hard worker, and he always has a positive attitude, but the biggest thing is if you put him in situations, he’ll finish them.”

Forge defender Dominic Samuel, a player who relishes the physical aspects of the game, respects that part of Novak’s skills, too.

“He’s a big body, a big presence,” Samuel remarked. “As a defender, it is not fun dealing with those type of forwards.”

Born and raised in Pickering, Ontario, Novak began playing for the local Pickering soccer clubs, but in a different position to the centre-forward one he now patrols for Forge, staying between the sticks as a goalkeeper for the likes of Glen Shields, Wexford, and the Durham regional program until he was about 14.

“I had a growth spurt a few months later in grade 8 or 9 and shot up about five inches,” Novak recalled. “After that, I realized scoring goals was a lot more fun than keeping them out.”

? @ForgeFCHamilton's Anthony Novak gets one in. Forge FC are up by 2 at the half!

His soccer journey would take him through the Toronto Lynx system playing PDL, and the Super 20s as well. When the time came for college, he opted for an NCAA Division II school, Lake Erie College in Ohio, where he took a bottom-to-middle-table side to a conference finals spot two years in a row.

“They weren’t as accomplished,” Novak said of Lake Erie. “I felt like if I were to accomplish something there, then it would mean a little more.”

College now complete, Novak returned to the Lynx, a team that became the Oakville Blue Devils in 2015 with a move to League1 Ontario. There, he continued to develop his outfield game, playing as a left winger, until his coaches decided to “just put him closer to the net and see what happens.”

The transition from goalkeeper to striker was a long time coming, but there were seeds planted early.

“When I was playing goalkeeper, obviously this was a long while ago now, I always used to think I could do what they’re doing,” Novak said. “I used to pick out weaknesses in forwards, I would do this differently, I would do that differently.

“And playing on the wing is good, but you don’t get to score goals as often and that’s the best thing there is: There is no better feeling. Being a No. 9 now, doing it for Forge, there is no better job out there.”

It very nearly wasn’t to be, however, as Novak was close to quitting soccer and joining the Canadian Army, once upon a time.

While he pursues a call-up to the Canadian men’s national team, Novak could have been serving his country in a different way, if footballing circumstances hadn’t gone quite as planned.

“Technically … I think my application is still active,” Novak explained, with a chuckle.

“It was in February I last heard from the army. I was still trying to get in with Forge, we had been chatting back-and-forth, I’d been to one of their camps. I was on a bike ride, and one of the detachments in Toronto called me. They said, ‘What’s going on? We noticed you haven’t put your paperwork back yet?’

Instead, Novak signed a contract with Forge on April 3. Nowadays, he’s focused on the football. But for a few goals here or there, perhaps his life would have been quite different.

“I plan to play soccer indefinitely. There is no other job you’d rather do,” Novak affirmed. “But, part of the reason I chose the army is – obviously, it would be a great honour to serve, Canada is a place I feel very fortunate to have grown up in – but in a job sense for me it’s the next best thing to being a professional athlete because that is essential what you are: You wake up in the morning, do your physical training, do your tactical training, then you go home and repeat.

“It’s a very similar lifestyle. The days are a little bit longer though. That’s what I was aiming for: The pro athlete style of life, except at the same time I got to do one of the best honours I could possible have.”

His teammates are pleased he kept the dream alive.

“I’m glad he didn’t join, that he stuck to what he loves, soccer,” Samuel admitted. “(He’s) a player I love having on my team; that kind of bulldog, gruff mentality. We trust him to hold up the ball and do the dirty work inside the box.”

So what did it feel like for Novak to finally put pen to paper on a professional contract?

He added: “I always felt myself that I could do it. It was always something I wanted so badly since I was a kid. There were a lot of moments where I came very close to giving up,  where tears were shed – it’s always a huge thing when you think about not continuing in something that you love.

“In the moment that I signed, it was a weird mix of emotions.

“Obviously there is the relief, it’s finally over, you don’t have to stress; your foot is in the door now, the opportunities are all there for you. Relief in that sense. But also the sense that, yeah, this is what I’m supposed to be doing.

“I belong here. This makes sense.”